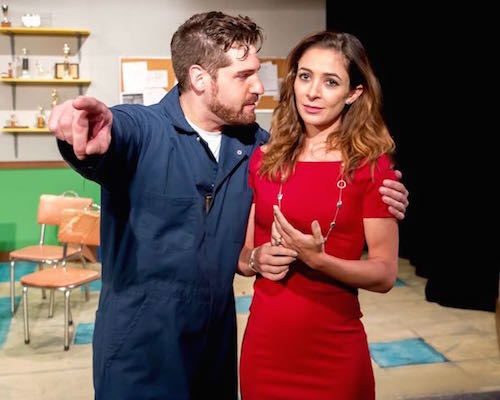 I don’t know anything Neil LaBute has done since 2000’s Nurse Betty, but reasons to be pretty is exactly what you would expect if the only data you had was that the author of In the Company of Men and Your Friends & Neighbors had tried his hand at romantic comedy without edulcorating the ethos of those works.

reasons to be pretty (why lowercase I have no idea) opens on a knock-down, drag-out argument between Greg (Johnny Martin) and Steph (Ali Kendall). Steph’s friend Carly (Courtney Chudleigh) overheard Greg tell co-worker Kent (Robert Adams), Carly’s husband, something to the effect that Steph’s face is plain in comparison the new girl’s, and Steph has gone ballistic, a situation made worse by Greg’s reluctance to own up.

The central conflict of reasons to be pretty is what in more patriarchal days was called “man against himself.” In terms of honesty, Greg is a man without a country, loyal neither to honesty nor dishonesty. He won’t tell Steph that he’s in love with her and madly attracted to her despite the fact that that’s probably what she needs to hear for them to salvage their four-year relationship, yet he’s willing to cover for Kent, a far less ambivalent character who loves to brag about the many ways in which he’s banging the new girl.

Despite the usual connotations of the word “pretty,” reasons to be pretty is Greg’s play, his journey. He’s never offstage, and he’s not an especially sympathetic character for most of the play, so if the character isn’t sufficiently humanized by the performance, the play is fucked. (A crude way to put it, I know, but considering LaBute’s love of expletives, I’m setting the mood.) Fortunately, Martin is equal to the task. He may be a bit stiff at times, but all in all he feels real. This could be said of the whole cast, in fact: stiff in places, but real enough. If the cast can loosen up as the run progresses and let LaBute’s quasi-realistic dialog become more sloppily conversational—and there’s no reason to think any of the four actors isn’t up to the task—we might get some real magic in places.

One curious aspect of the casting is Ali Kendall. It’s pretty clear from the script that Steph should be fairly average-looking—not especially hard on the eyes, but not notably pretty. Yet by most any measure Kendall is gorgeous, an incongruity so obvious that I felt compelled to ask director Gregory Cohen about what he had in mind. Sure enough, he confirmed that he went out of his way to play against the text and make Steph someone the audience would almost have think of as beautiful, thus pointing up the question of image, self- and otherwise. I’m not sure it works, but it does make you think.

That extra level of rumination probably adds to the overall experience, because ultimately there’s all that much to reasons to be pretty. LaBute is handy with dialog and not just skin-deep, but LaBute seems like a poor man’s David Mamet. reasons to be pretty is often funny, but it’s probably less affecting than he hoped, even with a final scene that pays off just right.

Nonetheless, there are reasons to see reasons to be pretty (for one, it brings the funny despite not really being a comedy), and if the cast can fully capitalize on what LaBute has given them to work with, those reasons are pretty good.