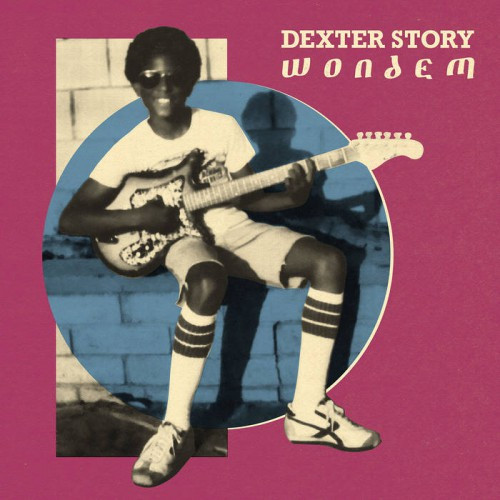 Wondem, Dexter Story’s debut on Soundway Records, is a love letter to Ethiopia.

Wondem (pronounced “Windem”) means “brother” in Amharic. But the music on Wondem is adorned with distinctive elements derived from a variety of other East African nations. The result blends Story’s wide-ranging background in soul, funk, jazz and folk with the sounds of Ethiopia,  Eritrea, Sudan, Somalia and Kenya. The album is a personal one and Story’s voice comes through.

The music is infectious, getting inside you like a celebration. The feeling is  apparent on the album cover: An old black-and-white photo of a young man (a teenaged Dexter Story), leaning to the side, seated on a brick wall bench. Holding his guitar, he wears a huge grin and aviator shades on the purple covered album.

Hand clapping is a big part of Wondem’s musical formula, contributing a sense of joyfulness to the overall.

“It is said that the drum and voice were the first instruments,” Story said. “I would bet that clapping hands were also among the original musical devices. The more I immerse myself  into African music and culture, the more I realize the power of the communal circle where people of all ages expressed themselves through singing, dancing, drumming and clapping.”

Handclapping served an important role in his creative process.

“Clapping transported me, put me in the right headspace to journey musically,” Story said. “When you listen to music from the Tigray region of Ethiopia, the clap is dominant. When you see the indigenous eskista dance of Ethiopia, a fast outstretched clap is an unmistakable aspect of the art form. And, we applaud to express our enjoyment and often rhythmically accentuate the stronger beats in the west with clapping. Clapping is universal.”

Wondem’s unique arrangements are tightly engineered but share a warmth. It’s filled with percussion, brass, woodwind and strings, an upright piano or vibraphone in some places and a Wurlitzer electric piano as well as synthesizers. You can also hear African instruments. If you listen closely, you will hear the kebero drum and Ethiopian chordophone krar, which sounds similar to a harp.

Story wanted indigenous language on Wondem. The African artists featured on the album are Alsarah Elgadi and Yared Teshale. Elgadi sung in Arabic on Without an Address, which focuses on the refugee issues in her native Sudan. Teshale sang Sidet Eskemeche, which means, “we will remember,” or “it will never be forgotten,” in Amharic.

Story sings on a few numbers including, A New Day. His voice sounds like part of the instrumentation. This happens on Merkato Star. It has a great clapping and horn introduction. Yene Konjo, the last track on the album, includes piano played by Mark de Clive-Lowe. Story said that since he doesn’t speak Amharic or Arabic, he was concerned that too much English singing would detract from the authenticity he was trying to convey. He created chant-styled parts allowing him to blend with the instrumentation more smoothly.

Wondem is a multitude of unique sounds that will leave you desiring more. Story has deftly blended the indigenous with the orchestral, and the melodic with energy driven rhythms.

“I hope that I can continue to create music that honors and celebrates the African continent and the diaspora,” Story said. “This is only the beginning for me. Wondem feels like a rebirth.”