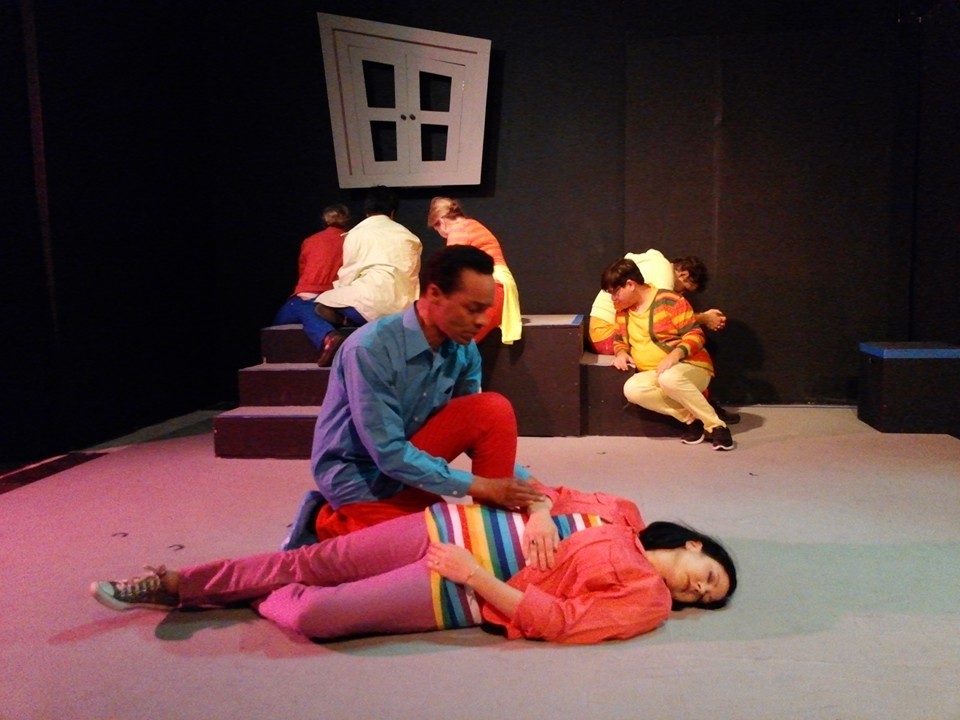 I was surprised to find that Linda McLean is a playwright of some accomplishment, having written works for the BBC and serving as chairperson for Playwrights’ Studio, Scotland between 2008­’15. I fully expected that the author What Love Is and The Uncertainty Files, two one-acts U.S. premiering at the Garage Theatre, to be by a woman in her early 20s.

Sad to say, I’m not talking about the good kind of youthfulness. What Love Is seems written by an undergrad who just saw Samuel Beckett’s Endgame and said, “Kewl!” Gene (Bryan Jennings) and Jean (Karen Kahler) are an elderly couple doing a dance that is the last stage of their life. Their looks have gone, their memory is going, and their adult daughter (Victoria Marcello) yearns to go before it’s too late for her to find an independent life of her own. They potter about their flat musing about their lot at this stage of life in brisk phrases that recycle Beckett for both style and theme. Like so: “I remember how you were.” “Can you bear it?” “Some days better than others.” And so: “Light and dark.” “I used to be light.” “You have light.” But in these exchanges we find little of the great man’s cleverness or facility with language, and almost none of his pith.

Fortunately, Jennings and Kahler are good enough to keep us passably engaged. Their tenderness makes us feel for them as they founder along life’s path with the knowledge that they can never reclaim the ground they’ve ceded. The have reached the end of the line, and the most they can hope for is together to enjoy the smallest morsels of pleasure life leaves for them to feed on in the immediate present.

Unfortunately, The Uncertainty Files offers us less. You don’t realize this right away. Starting out as a train of mini-monologs about what is and is not certain in the world of dating, McLean shows a talent for rendering realistic speech rhythms, with all the “um”s and “you know”s in the right places and the cast doing them justice (Julie Marie Hassett particularly stands out). You’re interested to see where this is going to go, how this device will inform a story.

But this train never leaves the station. The Uncertainty Files plays like a string of interview footage randomly spliced together by a filmmaker who has just discovered that people introspect and is amazed to find that uncertainty and, like, feeling like there are things outside of one’s control are common themes. To spice things up (I guess?), we rarely go 120 seconds without a truly meaningless sound cue, the silliest of which is refrigerator buzzing that comes and goes throughout the entire hour and that often has characters hopping up to stop it. (The refrigerator never actually factors into a single monolog. It’s just there to buzz.)

Reading director Dave Barton’s program note elucidates why The Uncertainty Files is the way it is: McLean “asked a diverse group of people about uncertainty,” then transcribed the words and environmental sounds (an industrial fridge at one of her interview spots, a motorcycle passing by outside) verbatim. That wouldn’t make for much of a documentary; it doesn’t really make for a play at all. As if the Garage Theatre is aware of this, they have laid a movement element on top of the proceedings. That tactic worked wonderfully in the Garage’s last production, making a mediocre script far more fun by drilling to the core of the plot and extracting, even creating something that was not at the surface. But with The Uncertainty Files there’s little substance and no plot whatsoever, and so the movement element can only bob about at surface, never anchoring itself to deeper levels—because there are none.

Considering the occasional mmming and hmming I heard during these U.S. premieres, undoubtedly some would argue I’m giving McLean short shrift. But during a night out at the theatre you hear mmming and hmming almost every time a character makes a common cultural reference. Some people simply respond positively to whatever they recognize in art. Are there thoughts and feelings you’ll recognize in What Love Is and The Uncertainty Files? Sure. Is that enough? Hey, I just work here.