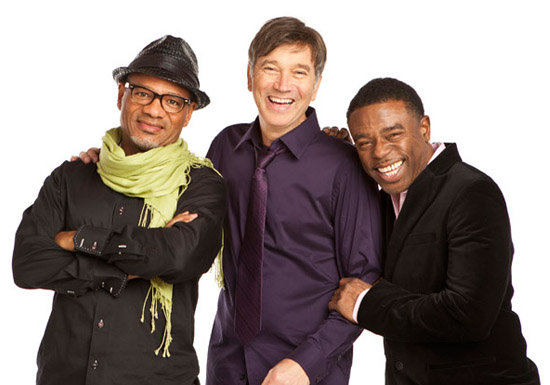 With Valentine’s Day soon upon us, what could be better than taking the one you love to a romantic concert and dinner? As the holiday for lovers approaches, it’s time for Rainbow Promotions Valentine’s Day Concert, Feb.13, at the Terrace Theater in Long Beach.

Brought together by Matt Pierson of Warner Brothers Jazz, the Brown-Whalum-Braun team up was conceived as a modern take on a lively ensemble vibe Pierson says.

Indeed, as a guitarist, Grammy nominated Norman Brown’s dexterous playing has earned him praise as the George Benson and Wes Montgomery of his generation.

Twelve-time Grammy nominee and winner for 2011’s Best Gospel Song, “It’s What I Do”, Kirk Whalum is one of the most influential sax men of his generation. To hear his playing is to truly hear the intonations of the human voice through his horn.

Musician, songwriter and producer Rick Braun is a high energy and charismatic performer. A diverse player, he was named Billboard’s #1 Smooth Jazz Songs Artist of 2015 but also has a background in straight ahead jazz. His playing brings a passionate mix of R&B, jazz and funk.

To add that extra dose of romance, also on the bill are vocalist, Kenny Lattimore and saxophonist Michael Lington.

Lattimore, who was proclaimed “A Modern Soul Man” by the New York Times, has said that his musical purpose is speaking to the hearts of women and the minds of men. He has enjoyed multiple career successes from his debut album, Kenny Lattimore, which went gold to the critically acclaimed sophomore release, From the Soul of a Man, followed by two Top 10 duet albums with singer Chante Moore.

As a teenager, Danish –American Michael Lington was captivated by the contemporary jazz of David Sanborn and Grover Washington, Jr. which led him to American soul music. Lington described when he heard the music of Jr. Walker, King Curtis, Sam Cooke and Wilson Pickett.

“This was the music that made me want to play the sax, all of that American R&B and instrumental funk becoming part of my soul in my mid-teens,” said Lington.

Create a memorable Valentine’s Day sharing an appetizing meal, followed by a captivating concert experience. With a VIP package comes a 3-course meal, a rose for each lady and preferred theater seating. Rainbow Promotions are the producers of the Long Beach Jazz Festival, one of the city’s most popular annual musical events. The event provides the perfect venue to relax, unwind and enjoy an enchanting night music for your Valentine’s celebration.

“You never know who may show up,” said Kimberly Benoit of Rainbow Promotions. “Stevie Wonder attended last year and this year, actress Loretta Devine will be coming. Don’t miss the Smooth Jazz Concert For Friends and Lovers.”