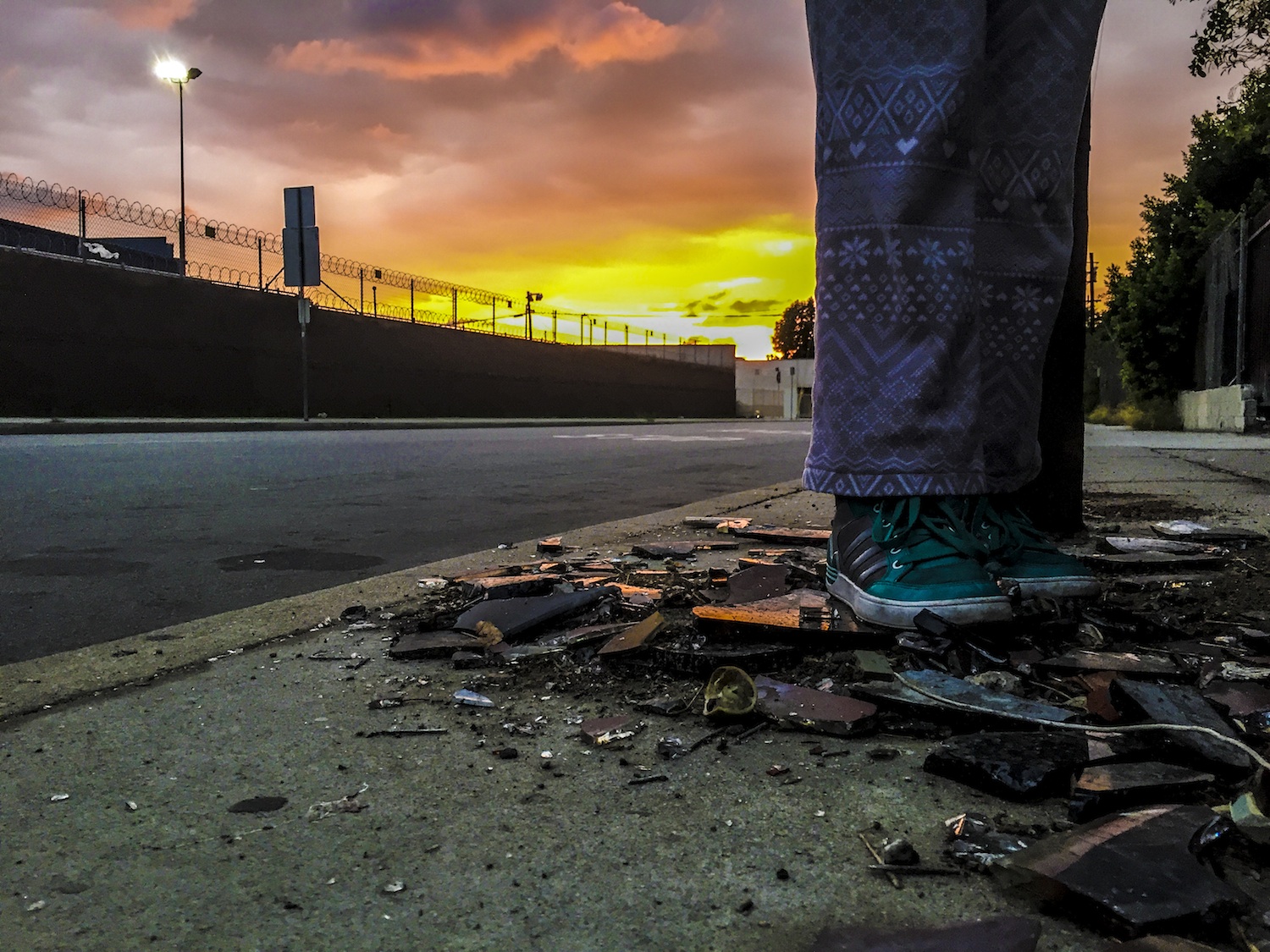 How our environment affects us is not always holistically understood. There are economic, social and environmental factors often not in our control. Watts Now LA is a photo narrative series that deals intimately with the physical surroundings of that community and affecting change within it. The exhibit is part of the VisionLA.‘15 Climate Action Arts Festival, which ran concurrently with the Paris climate talks in December.

Like the environment it examines, Watts Now is very local. It was created by the Watts Labor Community Action Committee, California State University Dominguez Hills, LA Housing is a Human Right, and Physicians for Social Responsibility and produced by local residents, youth, faculty and students.

One of the photographs on display was a lake with weathered warning signs and devoid of life. The picture was of the lake at Willowbrook Recreation Park. Before the park was renamed after Laker basketball great, Magic Johnson, before signs were posted warning of high levels of toxins in the soil and water, local residents use to fish at the lake.

Other photos showed the multi-colored soils and gravel forming heaps along railroad tracks bordering houses and schools, evidence of illegal dumping. To the naked eye the subtle brown hues of the soils may be hard to notice but the camera lens presented it clearly. Poisons of arsenic and boron keep the weeds from growing along the tracks, but the wind and rain spread these contaminants. People also use the tracks as short-cuts, taking residue with them as they walk.

A homeless encampment is pictured along an empty storm drain, with litter strewn everywhere.

Timothy Watkins, the president of the Watts Labor Community Action Committee said the exhibit sheds light on the toxicity that Watts is exposed to daily.

‘It may be one of the unhealthiest places in the city, in the state or in the nation,” Watkins said.  “In Watts there is a greater convergence of transportation modes — may be greater than anywhere else I can think of.”

Watkins’ father, Ted, founded Watts Labor Community Action Committee 50 years ago to improve the quality of life in Watts, — the same year as the Watts revolt took place. Because of this milestone, Cal State University Dominguez Hills wanted to get involved with this exhibit.

Law and social justice students from the university Cal State University of Dominguez Hills and students from Jordan High surveyed and took photos of these blighted sites as part of curriculum-based assignments.

The Human Rights Housing Collective and two professors from Dominguez, Vivian Price and Jorge Cabrera, were also involved in the documentation. Cabrera worked with the students, going around Watts, collecting information about environmental injustice.

Monika Shankar, with Physicians for Social Responsibility, got involved with this project when the physicians group started documenting the environmental conditions early this year.

“Jordan Downs has been collecting pictures for many years because they feel the contamination needs to be documented,” Shankar said. “Part of the goal is to capture narratives, but there is also a goal for our own accountability, to be able to document what is happening on the Jordan Downs site in terms of remediation so that the main agencies involved at this site can be held accountable and do what they are supposed to be doing. Nothing says it like a photo does.”

“Part of the goal is to capture narratives, but there is also a goal for our own accountability…. Nothing says it like a photo does.”–Monika Shankar with Physicians for Social Responsibility.

These groups also plan to start testing with an independent group of organizations that take the information to compare to what they are being told publicly.

Running through the city are not just one or two of each, but multiple rail lines, oil lines, pipelines, air traffic corridors, highways, and freeways. Southern Pacific, Union Pacific, Santa Fe Lines, and Metro rail are all there. Underneath the railways are oil pipelines. Some were put in a few years back, others date back to the turn of the past century when 90 million barrels per year of oil was being pumped through Watts to the Harbor with ships waiting off shore.

“If you just look at a minimal amount of lead poisoning due to consistent long-term exposure, you’re looking at symptoms that are identical, in many cases, to what we see our most uncivil and worst behaving kids in the community,” Watkins said.

“They’ve been subjected to the environmental condition,” Watkins said. “But then there is a social condition that would say, because they behave the way they do, they deserve to be subjected to yet another system of suppressive heinous kinds of condition.

“But the community may, in fact, be under-informed or unaware of the real consequences to the exposure of big industries.” The bottom line is, “Your child isn’t safe.”

Watkins notes the ongoing threat of the  “hyper toxic” site right next to Jordan Downs that’s undergoing a $700-million state required clean up is in the midst of an open air clean up.

“Early in the morning, kids are walking to school, their mothers are right there next to them,” he said.

“They are out there leaning against the fence waiting for the light to change. Workers out there driving the tractors and trucks are walking around in this (dust), they don’t have any protective gear on, no masks, and they’re just working. We don’t understand and the community [is] not being informed of it.”

Watkins researched through the cancer registry if Watts has any illness clusters and discovered it’s almost impossible to find.

From an illness standpoint it looks at Watts as being relatively healthy. But six miles away  in Los Angeles council District 9, there’s the hazardous South Los Angeles Wetlands Park. Watkins noted that Watts is 20 miles away and in the same council district as San Pedro, in District 15, but has not gotten nearly the attention it’s southern neighbor has on environmental justice issues.

Watkins says Watts is not represented agency education level or the political level. He wonders where the advocacy is.

“Sometimes these narratives are hijacked by agencies or politicians, folks who have more power in the community,” Shankar added. “But the stories of those who are more disadvantaged due to social circumstances or economic circumstances, they have a voice as well. And we want to elevate that voice.

“It was wonderful to see the kids in the class, the way they had analyzed the conditions around them and the same day talking about gang violence around them…. They are making those observations and realizing the environment has contributed to violent behavior or inability to learn and concentrate. We provide that little connection but they are very aware of what is happening in their neighborhoods in a very sharp way.”

The exhibit runs through Jan 31.  A closing reception will take place  Jan 29.