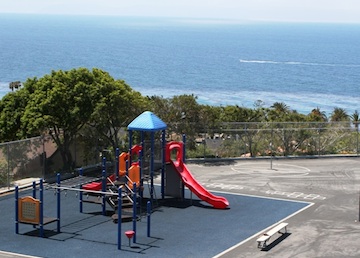 By David Weaver, Parent of a White Point Elementary School Student
San Pedro streets are getting narrower—25th Street and Pacific Avenue, for example. The shift is part of a larger effort to slow us down. Speed bumps, narrow streets, zigzags, roundabouts have all been employed to create slower speeds and safer streets.

City planner Jeff Speck put it this way: “When lanes are built too wide, people are forced to walk farther across streets on which cars are moving too fast and bikes do not fit—and bad things happen.” The ideal lane width is 10 feet.

So why is Los Angeles’ 15th District Councilman Joe Buscaino leading the effort to widen safe, unique, historic, narrow, tree-lined Hamilton Street, just blocks from White Point Elementary School? Why has Buscaino’s office quietly approved a four-lane, 70-foot-wide, 1,000-foot-long drag strip through the heart of a residential neighborhood in a school zone? And why has Buscaino’s office fast-tracked this pet project, which greatly increases the likelihood that a child walking to school will be hit by a speeding car?

By enlarging Hamilton Street, Buscaino will direct traffic around his own wealthy neighborhood.

Upon inspection, you see that Hamilton Street runs parallel to Paseo Del Mar—the street that fell into the ocean a few years back. Strangely, the landslide that took out Paseo Del Mar has been an economic boon for those wealthy residents near the slide and in South Shores.  No longer can motorists take the coast down Paseo Del Mar and up Western—that route has been cut off, leaving a park-like enclave of traffic-less streets and soaring home values—where Buscaino lives.

Buscaino’s office denies the correlation, of course (though several staff members live in the South Shores enclave). James Dimon, president of Coastal San Pedro Neighborhood Council, said, “I’m not going to lie to you…widening Hamilton Street has everything to do with Paseo Del Mar and redirecting traffic.”

As for residents near Hamilton Street, few were ever told about the street-widening project, and to this day know nothing of its true scale. Ryan Ferguson, Buscaino’s field deputy responsible for notifying residents of the project (he lives near the slide), informed maybe six in the immediate area in early 2015. When asked why he notified so few, he replied, “I only told those people I felt would be affected by the project.”

More disturbing yet, Buscaino’s office has given the project what can only be viewed as a fraudulently low budget of $1.2 to $1.6 million—a figure that was approved without a complete set of construction drawings. As a contractor I estimate that the project will cost $3 to $5 million—money that should be used to repair Paseo Del Mar. There’s no way to know what the true costs will be.

But here is something we can know: One day a kid will have to cross Hamilton Street—a street too wide and too straight, a street where cars are driving too fast—and bad things will happen. And Councilman Buscaino, we will look back at your direct efforts to create this school-zone drag strip.

Yes, Hamilton Street can use some improvement. It needs to be 2 to 4 feet wider, with a sidewalk on the north side. This can be done while keeping it the unique and lovely and safe residential thoroughfare it is. Then we recommend you take the millions saved and perhaps help the homeless being dropped off in the district, clean up and repair the dirt alleys in San Pedro and Wilmington, and attend to the trash and graffiti and lack of police presence on our streets. In other words, Councilman Buscaino, serve the entire 15th District, not just your own backyard.

Fact: In 2012, more than one in every five children between the ages of 5 and 15 who were killed in traffic crashes were pedestrians.