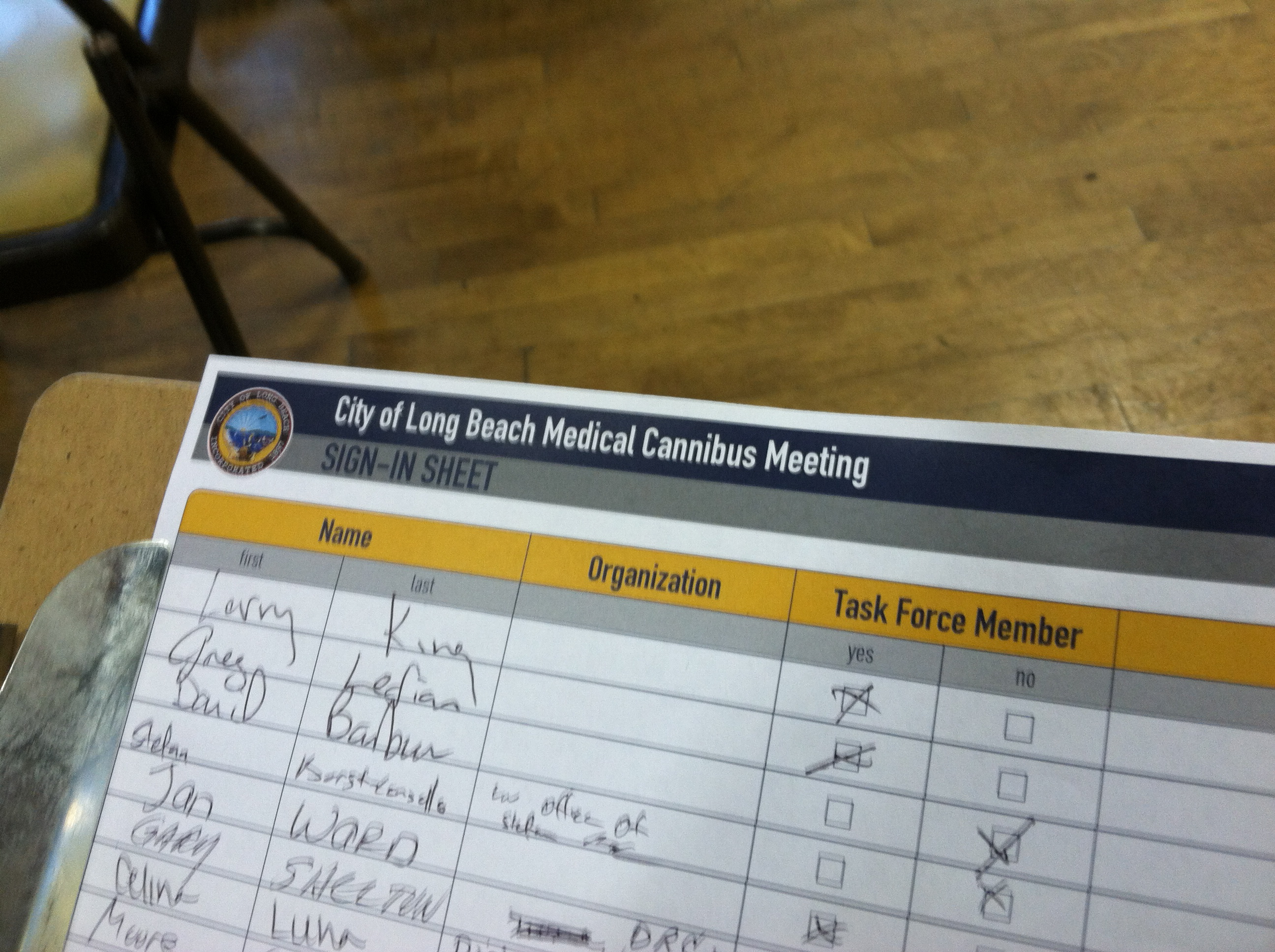 We do owe the public a resolution on this issue, with a responsible timeline.
–Mayor Robert Garcia, February 2015

The cannabis landscape in the United States has gotten a whole lot greener since September 10, 2013, the night the Long Beach City Council unanimously voted to draft a new ordinance allowing medical marijuana dispensaries to return to the city. Four states have legalized marijuana for recreational use. The California Democratic Party has inserted into its platform a plank calling for “the legalization, regulation and taxation of marijuana, in a manner similar to that of tobacco or alcohol.” The police chief of Washington, D.C. has publicly stated that “[a]lcohol is a much bigger problem [than marijuana],” and that “[a]ll those [marijuana-related] arrests do is make people hate us,” while generating unnecessary paperwork and court appearances. Congress has even prohibited the Drug Enforcement Administration from conducting any more raids on retail operations sanctioned in states like California that allow medpot.

Nonetheless, nearly two years later cancer patients who cannot fend for themselves must induce providers to break the law in order to get medpot within city limits. And it’s looking increasingly likely that nothing will change before California jumps on the legalization bandwagon.

Seem unlikely in a city whose residents look so favorably on cannabis that over four years ago they voted in favor of legalizing marijuana for recreational use? Read on to get a lay of the land.

After the September 2013 city council meeting that started the current process, it was more than four months before the Planning Commission began work on a new medpot ordinance. Eight months later, the commission finally provided the city council with its draft ordinance, which proposed allowing 18 dispensaries citywide under tight restrictions.

However, the city council did not pick up the matter until a February 10, 2015, study session, where it created a Medical Cannabis Task Force of two citizen representatives from each council district to report to the city council in April with input concerning what the eventual ordinance should look like.

The one councilmember who voted against this action was Suzie Price. Price says her “nay” vote was not because she opposes dispensaries or the task force, but because the plan as outlined was unrealistic.

“Frankly, it seemed to me like it [i.e., the timeline] was a little more for show than it was real,” she says. “It was more about trying to send a message to people who wanted to move this along than realistic […] We voted on this timeline that was absolutely insane considering what we were asking [the task force] to do […] That gives people a false expectation.”

Price was right, as the task force did not hold even its first meeting until April 1. Moreover, the five meetings since then have be decidedly unproductive—a fact of which many task force members seem keenly aware. During the May 13 meeting, for example, Member Greg Leifan wondered aloud when the task force would take any action—and whether they even had in place the mechanics for such.

That question was on full display when the task force spent 45 minutes attempting to hammer out how they could compile a list of “tentative suggestions” to bring back at the end of the task force’s life so as to decide whether they want to recommend any or all of them to the city council.

“We’ve had three meetings, and we really haven’t done anything,” said Member Adam Hijazi during the discussion. Member Joe Sopo concurred: “Going for three-and-a-half hours and doing nothing I feel is non-productive.”

But two weeks later things were no better, with the task force still struggling with the logistics of compiling those tentative suggestions. Member Adam Herzberg called the process a “circus of absurdity,” adding, “This committee has been absolutely useless to this point.”

For all this, the Medical Cannabis Task Force is purely advisory, and the city council is under no obligation to pay heed to any of its recommendations.

One organization with no desire to see the process move forward is the Long Beach Police Department. Since the city council’s September 2013 signal of intent to reintroduce dispensaries, the LBPD has remained active on the cannabis front, arresting 780 people for marijuana offenses, issuing 683 citations, and serving 70 search warrants.

According to Deputy Chief David Hendricks, a guest speaker at the May 27 Medical Cannabis Task Force meeting (the first from whom the task force has heard), the LBPD regards the distribution of marijuana—including for medicinal purposes—as a felony. When questioned by a task force member as to whether it would be better for the city to have licensed dispensaries in place of unlicensed delivery services—of which over 50 can be found locally via listings such as WeedMaps—Hendricks acknowledged no distinction. “I don’t think either one is good for the city of Long Beach,” he said. “[…] It’s illegal, pure and simple.” When asked whether the department has a mechanism to allocate its drug-related resources based on the relative harm of respective drugs, Hendricks demurred: “I don’t feel the need to address whether one [drug] is worse than another.”

Hendricks acknowledged that in the past the department’s resource allocation toward dispensaries—including the full-time work of eight detectives and one supervisor—has come at the expense of the department’s ability to address not only other drug-related crime but also property crime and even violent crime. And he says this will again be the case if the City allows dispensaries.

The LBPD’s willingness to prioritize its resource expenditure in such a manner is nothing new. Former Chief Jim McDonnell repeatedly inveighed upon the city council to ban dispensaries by claiming their presence “negatively impacts our ability to be able to address [crimes such as] human trafficking, prohibited possessors of guns, gang crime, and violent crime.” (McDonnell, who is now sheriff of Los Angeles County, is slated to address the task force on June 3.)

City Manager Pat West supports the LBPD’s contention that other areas of law enforcement must suffer if dispensaries come back to town. “[T]he Police Department would need to decide which current enforcement operations would be reduced to provide a marijuana enforcement detail,” he wrote in a memo dated March 24, 2015.

Nonetheless, the LBPD is pushing for any ordinance to include “seed to sale” tracking and the mandate that all cannabis be cultivated within city limits, unusual requirements (absent, for example, from L.A.’s medpot ordinance) that would increase the LBPD’s resource commitment, as opposed to minimizing it.

According to West, “[E]ven if additional resources were found, there would need to be a minimum of a one-year preparation period” to get an approved ordinance up and running. So with the Medical Cannabis Task Force virtually certain to extend past its current June 17 deadline (city staff have speculated that an August conclusion is more realistic), it is looking like marijuana could be legal for recreational use statewide before Long Beach is again home to a single medicinal dispensary.

Does that pace fit with Mayor Robert Garcia’s February 10 assertion that the city council “owe[s] the public a resolution on this issue, with a responsible timeline”? Garcia declined to comment.

“It’s time for all of us to step up and step in and lead once again in California, just as we did in 1996,” said Lieutenant Governor Gavin Newsom at the 2014 California Democratic Party Convention. “We did just that with medical marijuana. But for almost 20 years now, we’ve sat back admiring our accomplishment while the world, the nation, and states like Colorado and Washington have passed us by. ”

Just as other states have left California behind on the cannabis question, locally Long Beach has been left behind by Los Angeles, San Pedro, and most recently Santa Ana. Exactly why Long Beach is lagging may—or may not—be a complicated question. But the simple truth is that this city whose residents heavily favor allowing dispensaries to come back to town won’t be getting them anytime soon.