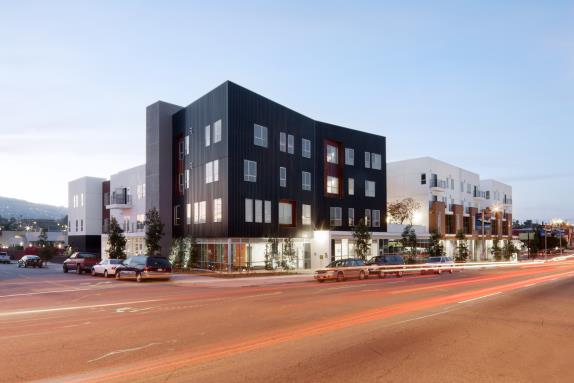 Meta Housing Corporation Completes Its First Family Arts Colony
SAN PEDRO – Meta Housing Corporation has completed its first “family arts colony” apartment project – a new, 49-unit arts-focused affordable apartment community that integrates artistic live-work space in the San Pedro.
The community, the Pacific Avenue Arts Colony, is the fourth arts colony project developed by Meta Housing and the first that is open to non-senior residents.
Constructed on a former automotive repair facility lot in the historic core of San Pedro, the 49-unit Pacific Avenue Arts Colony, or “Pac Arts,” offers six ground-floor live-work units for resident artists. It includes a full-scale professional level art gallery space that will encourage connection and collaboration with the nearby arts district.
The Pacific Avenue Arts Colony development was financed with 9 percent tax credits, as well as funds from the California Community Reinvestment Corp. and the Community Redevelopment Agency of the City of Los Angeles.
Meta Housing also worked closely with long-time partner Bank of America, which provided construction financing and equity for the project.
The Pacific Avenue Arts Colony was developed by Meta Housing in partnership with General Partner Western Community Housing, and was designed by Y&M Architects. Non-profit EngAGE will serve as arts and programming service coordinator for the project.
The community offers a variety of art-focused amenities, including professional-grade art studios, a soundproof music room and a graphic media center, among others.
Pacific Avenue Arts Colony, at 303 South Pacific Ave. in San Pedro, is comprised of affordable one-, two-, and three-bedroom floor plans. More information is available at www.pacificavenueartscolony.com.

Murder Suspect Arrested After DNA Match
LONG BEACH — After more than a decade, 39-year-old Stewart Teofilo of Patterson, Calif., will face a murder charge after he was connected to the 2002 crime through DNA.
The was opened on June 24, 2002, when at about 3:24 p.m., Long Beach Police responded to 1200 Pier E in the Port of Long Beach regarding reports of a person who had been stabbed.
When officers arrived, they discovered 33-year-old Maurice Howard of San Gabriel, inside his vehicle in a parking lot at the location. Long Beach Fire Department paramedics responded and pronounced Howard deceased at the scene.
Howard had sustained multiple stab wounds to his head, upper body and torso area. Detectives processing the scene collected a substantial amount of physical evidence the night of the murder. However, they were unable to identify a suspect and the case went cold. Several years later, cold case investigators submitted evidence collected from the scene to the Los Angeles County Crime Lab for DNA testing, hoping that advances in medical science would lead them to a suspect. In May of 2014, detectives received information that a DNA profile from an evidence sample submitted resulted in a match to Teofilo. Detectives determined that although Teofilo was living in Patterson, he had connections to Long Beach.
On April 21, 2015, detectives arrested Stewart Teofilo in Modesto, California, as he appeared in court on unrelated charges and transported him back to Long Beach. On April 23, the Los Angeles County District Attorney’s Office filed one count of murder on Stewart Teofilo. He was arraigned on April 24, and is being held at the Los Angeles County Men’s Jail on $1 million bail. He is expected to appear in court on May 1, 2015. A motive for the murder is still under investigation.
Anyone with information regarding this incident is urged to call (562) 570-7244 or visit www.lacrimestoppers.org.

Port to Consider Cement Import Facility Final EIR
LONG BEACH —The Port of Long Beach has prepared the final environmental impact report for the Mitsubishi Cement Facility Modification Project.
The port’s Board of Harbor Commissioners will consider the adequacy of the final EIR at its regular meeting May 11, and whether to approve the proposed project.
Mitsubishi Cement is proposing modifications to its existing import cement facility on Pier F at 1150 Pier F Ave. The facility receives bulk cement and cement-like materials (including Portland cement, blast furnace slag, pozzolans, and fly ash) via bulk cargo vessels at Berth F208. The product is stored in a warehouse and loading silos. It is then loaded onto customer trucks via three truck loading racks and transported to local and regional concrete batch plants.
The proposed project would consist of constructing 40,000 metric tons of additional storage capacity consisting of storage and loading silos on vacant port property adjacent to Mitsubishi’s existing facility. The existing site would increase in size from 4.21 acres to 5.92 acres. It would also include installing an emission control system (Dockside Catalytic Control System) to capture and reduce nitrogen oxide emissions from ship auxiliary generators at berth, as well as upgrade ship unloading equipment and land side structures.
The port’s Board of Harbor Commissioners is scheduled to act on the proposed project during a public hearing (Spanish and sign language translation services provided) on May 11 at 6 p.m., during the board’s regularly scheduled meeting, at the Harbor Department Interim Administration Offices, 4801 Airport Plaza Drive, Long Beach.
The final EIR, including comments and responses, is available at: http://www.polb.com/ceqa.
The Board will consider any further comments regarding the proposed project at that time. Alternatively, comments may be sent electronically to Heather Tomley, Director of Environmental Planning at: heather.tomley@polb.com

Long Beach Taps into Growing Brewery Industry
LONG BEACH — The Long Beach City Council has initiated a zoning change that will make it easier for craft breweries, wineries and distilleries with tasting rooms to open shop throughout the city.
On April 7, the City Council adopted a zoning code amendment permitting craft breweries, wineries, distilleries and accessory tasting rooms to operate within commercial, industrial, and certain planned development districts. The zoning change streamlines the application and permitting process, reducing the time and costs associated with starting this type of business. The ordinance also provides concise development standards designed to guide new projects and minimize impacts to commercial neighbors.
The craft brewing industry has experienced tremendous growth within the past 30 years, both in volume of production and market share. Prior to the city’s zoning change, the Long Beach Municipal Code allowed for similar uses in specific zoning districts, such as the manufacturing of beverages in certain industrial zones, and brewpubs in the downtown plan area.
City staff collaborated with the Long Beach Police Department and the City Attorney’s Office to establish development standards in relation to the zoning change, including facility size and volume of production capacities, hours of operations, and stipulations that an alcohol manufacturing business and accessory tasting room may not be located within 500 feet of a preschool or K-12 school.

Hahn Advocates for Truck Drivers
Washington, D.C. — On April 29, Rep. Janice Hahn advocated for striking truck drivers at a hearing on commercial motor vehicle safety. She also inquired into federal avenues to promote their fair treatment.
Truck drivers who serve the ports of Los Angeles and Long Beach have been striking since April 27, in protest of wage-theft and unfair employment practices. These drivers have long been trapped in a system in which many are misclassified as “independent contractors” by their employers, who can then deduct business expenses from their employees’ checks.
In addition to low wages, truck drivers are often pressured to work long hours contributing to exhaustion and safety concerns for themselves and other drivers on the roads.
“Recently they have won victories in the courts, but these unfair practices persist,” Hahn said. “These trucking jobs ought to be good careers You should be able to earn a good living moving this country’s goods.”
Hahn asked Teamsters Director of Safety and Health LaMonte Byrd, one of the witnesses testifying at the hearing of the House Transportation and Infrastructure Subcommittee on Highways and Transit, whether truckers are often pressured to work unreasonable hours and how the federal government should address these unfair employment practices. The Teamsters have backed the striking port truckers.
Watch Congresswoman Hahn’s questioning during today’s hearing here.

Hahn Calls for Immediate Debt Relief for Corinthian College Students
Washington, D.C. — On April 28, Rep. Janice Hahn (CA-44) called on U.S. Education Secretary Arne Duncan to make sure all students who took out federal loans to attend Corinthian Colleges have those loans discharged. Corinthian Colleges Inc., a for-profit company, abruptly closed all of its remaining campuses and ended its college programs this week following financial troubles and numerous government investigations of its practices. The most recent closures displace 16,000 students across the country, including more than 10,000 in California.
Hahn has previously intervened to help students of a failed for-profit college, Career Colleges of America, following its closure of its campus in South Gate in her district in 2014.