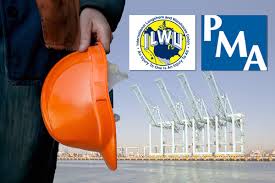 PMA Decides to Lockout of ILWU Workers
SAN PEDRO — On Feb. 11, the Pacific Maritime Association cited alleged slowdowns by the ILWU as their rationale for locking down the port Feb. 12 and 14 through 16.
PMA spokesman Wade Gates claimed that the PMA made a comprehensive contract offer designed to bring these talks to conclusion and the union made a request they knew the PMA couldn’t meet.
The PMA attack on the union leadership’s integrity to the rank and file forced ILWU president Bob McEllrath to set the record straight in a letter released to the membership and pensioners, noting that a100 local resolutions were submitted to the contract caucus this past year and that those resolutions became the mandate for the current negotiating committee.
In a letter, McEllrath’s called the PMA’s assertion that the union is holding up negotiations on non-essential matters as false.
The issue that’s supposedly holding up negotiations was the union’s request to end the virtual life-time terms of the contract arbitrators–people that the PMA and the ILWU agree on to become referees in individual labor disputes between the union and the association. The union requested that the arbitrators change when the contract ends.
McEllrath noted that the request was made in light of cases where the impartiality of arbitrators was questioned.
The PMA in its announcement said the union simply wanted to fire arbitrators that disagree with the union.
An agreement is said to be near, but workers and containers ships continue to wait.

NWSPNC Takes Stance on Waterfront Projects
SAN PEDRO — On Feb. 9, the Northwest San Pedro Neighborhood Council announced that it supported seven specific projects:
Wilmington Waterfront
o       Catalina Freight Site Re-Purpose
o       Wilmington Waterfront Promenade (Avalon Blvd. Corridor Phase IA South
o       Harry Bridges & Fries Ave. Park, Street Improvements, and Landscaping (Avalon Blvd. Corridor Phase I North)
o       Wilmington Waterfront Pedestrian Bridge
San Pedro Waterfront
o       Sampson Way & 7th Street Intersection Improvements
o       Town Square at 6th Street
o       Ports O’ Call Promenade
However, it reiterated its existing resolution, adopted Jan. 12, 2015, that the funding for these projects should be done without applying the limitations contained in the proposed policy, and with the understanding that any grant funds for the projects will be additive and not applied to the $50 million commitment in each community.
The neighborhood council requests that the Port of Los Angeles include funding to expedite completion of these seven projects in its 2015-2016 budget, have specific project schedules developed, and include them as part of the Capital Improvement Program project list.
The council also thanked the port for modifying its proposed policy by eliminating the deductions from capital funding for litigation and environmental expenses.

Medical Marijuana Ordinance Discussed
LONG BEACH — On Feb. 10, the Long Beach City Council hosted a study session to discuss the history, current status and proposed draft ordinance related to medical marijuana.
On Oct. 16, 2014, the Planning Commission voted to forward its recommendations to the city council on adopting an ordinance to establish restrictions and prohibitions on the establishment and operation of medical marijuana businesses.
The recommendations include:
1) All locations would require a conditional use permit and development standards would be established for consideration of all CUP applications;
2) Performance standards, which include a security plan;
3) Location restrictions within certain zones;
4) A cap of two locations per council district and no more than 18 locations citywide; and
5) Consideration of “buffers” between dispensaries and schools.
A citywide ban on medical marijuana dispensaries has been in effect since 2012, after a state appeals court ruled that the City’s previous ordinance was preempted by federal law.

Buscaino Announces District 15 Medical Marijuana Dispensaries Closures
LOS ANGELES — On Feb. 6, Councilman Joe Buscaino announced that he has been working with the Los Angeles Police Department and the city attorney to close down illegal medical marijuana dispensaries in his district.
Under Measure D there are 134 legal dispensaries in Los Angeles. The City Attorney’s Office has closed down more than 400 illegal dispensaries citywide.

Garcetti’s Economic Development Agenda Moves Forward
LOS ANGELES – On Feb. 11, Mayor Eric Garcetti signed his business tax cut plan into law and received the endorsement of the Los Angeles Business Council for his plan to increase Los Angeles’ minimum wage.
Garcetti has made job creation and support for businesses a cornerstone of his back to basics agenda. Los Angeles’ business tax is the highest in the county, making the city more expensive and less attractive to do business in, while the current minimum wage leaves even full-time working people below the poverty line, which is a drag on the overall economic recovery.
The business tax cut represents a 16 percent overall reduction within three years, saving Los Angeles businesses a total of $90 million. The cut takes the top tax rate from $5.07 per $1,000 in gross receipts to $4.75 in Fiscal Year 2016, $4.50 in Fiscal Year 2017 and to $4.25 in Fiscal Year 2018.
Garcetti’s minimum wage plan would responsibly and gradually raise the wage to $13.25 through 2017. After that, the wage will rise responsibly and gradually each year, through 2017. After that, this common sense measure pegs the minimum wage to the

POLAHS Student Named #ShareAwesome Contest Grand Prize Winner
SAN PEDRO — Port of Los Angeles High School student Mika Verner, was awarded the grand prize for the #ShareAwesome contest.
The #ShareAwesome contest is a social media challenge that urged students ages 13 to 17 to capture and share photos of awesome people, moments and decisions. #ShareAwesome is designed to spotlight and address important issues of online safety and digital citizenship in a fun, positive way while helping families create an open,
The National Parents Teachers Association, a child advocacy association, awarded the prize. The contest was part of National PTA’s #ShareAwesome public awareness campaign, which launched in September 2014 and is supported by LifeLock, Inc. (NYSE: LOCK), the industry leader in proactive identity theft protection.
Verner was selected as the winner of the contest among hundreds of entrants from across the country for her photo captioned “My Sport is Sailing” and her finalist video. Verner was recognized, Feb. 10, at the Facebook headquarters during ConnectSafely’s Safer Internet Day celebration. He was honored with a $2,500 scholarship, Microsoft Surface Pro 3 and technology for her school.
Details: ShareAwesomeNow.org, PTA.org.