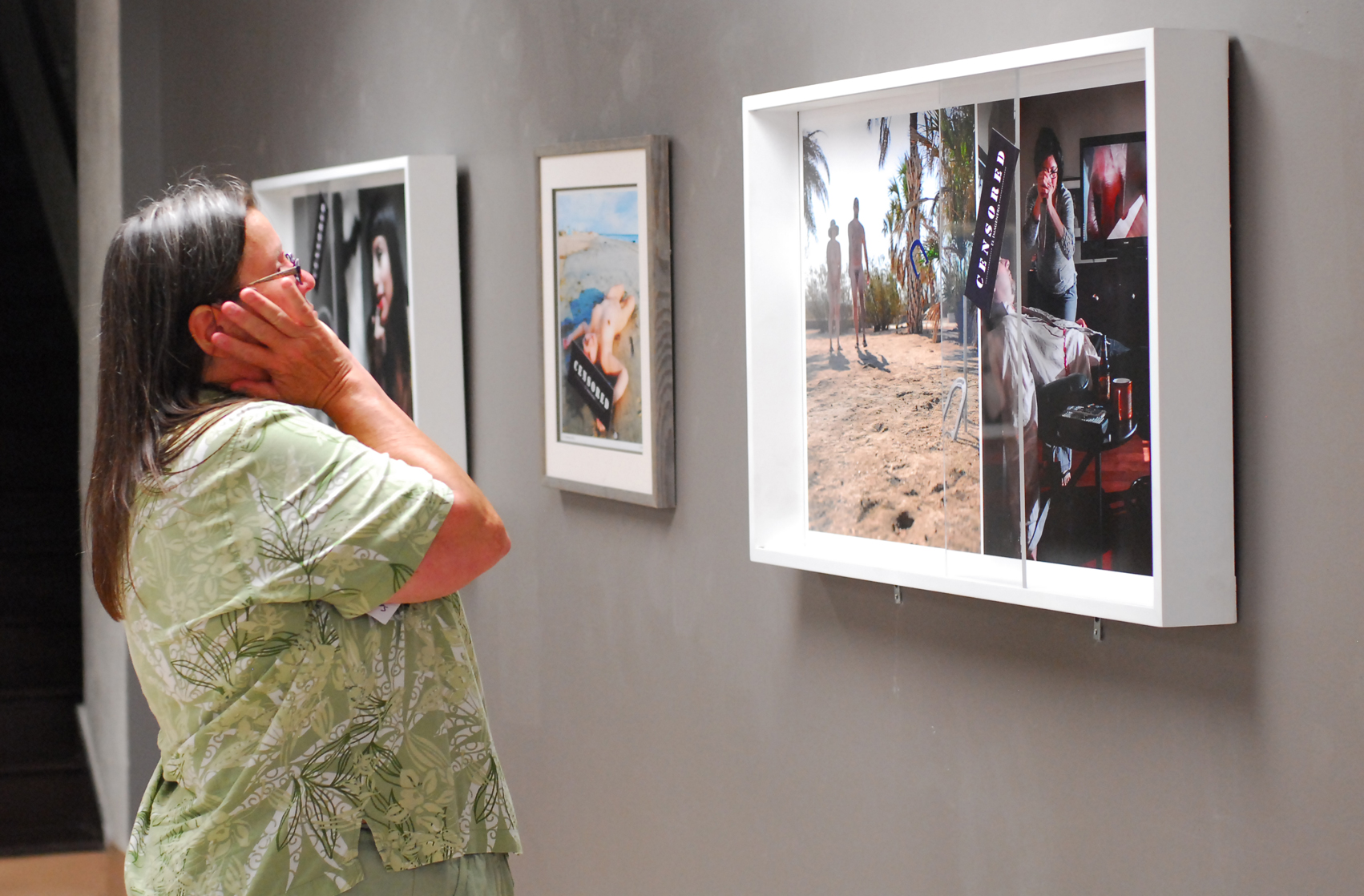 These day violence, seems to be on the forefront of the newspapers, television and the Internet. However, what we are exposed to is not without censorship.

The Croatian Cultural Center of Greater Los Angeles is exploring the topic of censorship in the media in the provocative exhibit What We Censor, What We Don’t.

What We Censor, What We Don’t is the work of photographer D. W. Gastélum, who works under the name El Imagenero. Considered a philosopher with a camera, he has been delving into the topic of censorship.

Earlier this August, police dragged out a Brooklyn grandmother, who was taking a shower, from her apartment. Officers stood by for more than two minutes while she was naked in the hallway. A video later emerged of the whole incident. The image of the African-American woman was broadcast across the airwaves and the Internet in a blatant disregard for her privacy.

Through his photographs, Gastélum tackles the hypocrisy that comes from the suppression of some speech and images, as opposed to others, often with conflicting standards to race, gender and age.

The interactive photography show depicts nudity and violence. In an attempt to define individual standards, visitors are allowed to censor the images by placing ‘censored’ stickers over the objectionable aspects of the images. Is the observer offended by the nude woman lying on the floor, or are you offended by the bullet hole in her head? Courts have judged that anytime, day or night on network television, you are free to see grisly scenes of murder, but nudity is routinely censored.

According to the exhibition’s guide: “Laws are mere codification of ‘community standards. They are not natural, and they are not universal. They are what we collectively decide or allow our standards to be.”

His legal mind brought him to the topic of community standards.

One of his inspirations for this project was a 2003 image leaked from Abu Ghraib prison in Iraq. The image, which the media released, showed Iraqi prisoners, naked, bound, hooded and tortured. The horrific sight of U.S. servicemen carrying out an atrocity was deemed fit to print, but the genitals of the prisoners were blocked out.

The juxtaposition of violence broadcast on the evening news and the censorship of the natural human body triggered Gastélum’s objections.

Another horrific image on the Internet that gave rise to the exhibit was a photograph that he saw on Facebook. The photograph was of two young boys, around 7 to 10 years old. They were both dead, hung by the neck with a wire, and both of them had their genitalia blurred out.

“To show their dead bodies does not accomplish anything,” Gastélum said.

Horrified by what he saw, Gastélum attempted to have the posting removed by Facebook. Regrettably, viral media took over and the image made several rounds on his news feed. The image inspired one of the first pieces in his current exhibition. Gastélum staged an image of a naked woman sunbathing, with a dead rooster next to her, hung by a wire. Which part of this image offends the viewer? The dead rooster or the beautiful, naked woman?

The artist also has found himself a target of censorship. A small section of the gallery is set aside for photos he created that were removed from his own social media sites. The images of tasteful nudes were found objectionable and Gastélum was puzzled about the reaction.

Many readers have reported images of bare bottom babies also removed while the daily news displays images of the horrors of war.

In his blog Gastélum says:
“The most important part is the people seem to understand the point of it, some of them even said that the art helped them firm up some of their thinking on the ideas presented….and they can influence what is accepted as a “community standard.”

The photographer brings years of experience to his process.

The large images for the show were all made digitally with a Nikon D3x and a selection of Nikon lenses.
He likes to shoot with fast lenses that open up to f/2.0 or better, and many of his go to f/1.4. All of those images were also giclee printed on Epson Exhibition Fiber Paper, with Epson K3 inks on Epson 3800 and Epson 9900 printers. The media used assures long-lasting accuracy.

His rich black and white photos call back to hours of darkroom printing in the days when 35 mm film was the standard. Today’s best photographers are experts in Photoshop.

He uses Adobe Photoshop CS6, and said he does not use any add on products.
“The lack of add-ons is mostly because I can still get the results I want without them and I do not do high volume processing that would make purchasing and learning to use such products much more valuable,” Gastélum said. “I did all of the retouching on all of the images, you’d be shocked to know what many famous photographers do NOT do on their own images. I personally printed each of them.”

The exhibition came with a full schedule of supporting lectures. Sean DuFrene of the Art Institute and Rudy Vega of UCI both hosted art discussions at the Croatian Cultural Center.

Artist Andrea Patrie shares the gallery space with Gastélum. Her nudes are reminiscent of artist Lucian Freud and her work can also bring a discomforting example of the relationship between artist and model.