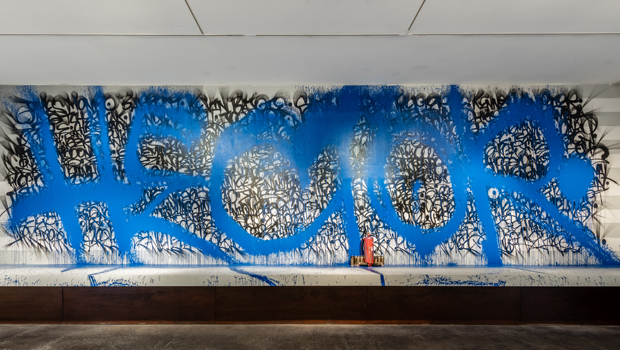 It wasn’t that long ago that street art was just considered the scribbles of street vandals on private property. In the past few decades these “vandals” have become “artists,” and their works have moved from the street to the interior walls of art galleries and museums. The Long Beach Museum of Art was the latest venue to exhibit such art, called “Vitality and Verve.”

When the Long Beach Museum of Art decided to host the exhibit, curators seemed to be unaware of the origins and intentions of street art, which is to attract attention toward a cause, or to be used as a form of provocation.

Street artist Saber achieved that goal with one mural in particular, “Too Many Names.” In contrast to the aesthetically appealing murals in the rest of the museum, Saber’s mural confronts an unsettling subject with a grizzly artistry. His monumental mural covering an entire wall, contains the names of the more than 557 people killed by police in the United States in 2015. The names, written in the spray painted technique of taggers – and emblazoned with the name of Long Beach tagger Hector Morejon – is controversial for it’s subject matter and its stylistic symbology.

In the midst of a timely and national conversation about victims of police shootings, the museum passed on an opportunity to participate in the dialog. The question remains: Why is this mural so controversial for the Long Beach museum?

The suspicion is that donors are uncomfortable with the subject matter. When a reception was planned on July 31 for members of the group Families for Justice, the museum slammed on the brakes. The families invited the press to help promote the young organization and the issue of police shootings in the nation, particularly shootings in Long Beach. The group was founded by the families of Morejon, whose name is in bold blue letters, as well as the families of Donte Jordan, and Feras Morad, who was killed when he experienced an extreme reaction to psychedelic mushrooms.

The press was greeted by a museum employee who passed out a statement from the museum that read: “The Long Beach Museum of Art (LBMA) is not affiliated with Families for Justice: LBC. The press release that was issued by Families of Justice: LBC on July 31, 2015 was not approved by the Museum nor does it reflect its views.”

A request for an interview with the museum director was met with an emailed statement. Aug. 7, which read:

“The media was not barred from the museum. There were several of them here on campus with Saber and the organization Families for Justice. Some of them took photos of the group in front of the mural, which we allowed. Since we are not affiliated with Families for Justice we conveyed to Saber that we would not allow any interviews conducted on campus regarding the formation of their organization.”

“It shocked me (that they wouldn’t allow interviews in the museum). When somebody else is paying your bills, I guess you have got to toe the line.” said Michael Brown, a member of Families for Justice. “I’m sure media has come into the museum before. This issue is in the headlines and it’s not going away. We are glad that they showed enough fortitude to leave Saber’s work on the wall. There’s 557 names on that wall. People are being exposed to this problem.”

Pamela Fields, mother of Donte Jordan, was hopeful that her son’s story could be told that day through the mural. The families had grouped together for support following the devastation and loss of their loved ones.

“I felt alone, like nobody felt my pain,” Fields said. “I needed to be one-on-one with the mothers of those killed. In Long Beach, police brutality is our reality.”

They want the police department to know that families have been affected. After her son was shot 10 times in the back, and twice more on the ground, she lost her job as a nurse and Fields found herself homeless for 19 months.

During this citywide exhibit, 21 artists were invited to participate. The mural project is presented in collaboration with Thinkspace and Pow! Wow! Ron Nelson, museum director, described an effort to spotlight artists who are stepping out of their studios to paint on a grand scale using outdoor walls as their canvas, as well as urban artists who are beginning to work in a traditional studio setting.

Muralists were not simply given access to the museum walls. As a result of this exhibit, murals cover walls all over the city. The stunning murals have added the desired aesthetic to downtown Long Beach. Street art has become more accepted by the general public due to its artistic recognition, and the high-profile status of Banksy and other graffiti artists. This has led street art to become tourist attractions in many cities.

“Street art is very popular right now,” Saber said. “It is used as a vehicle for gentrification. It’s something that looks great on T-shirts and it looks great on Coca-Cola bottles. I’m happy that it has opened doors for the artists, but it has watered down our message. At the end of the day, this was never meant to be commodified. This was meant as a way to express ourselves on our own terms.”

Saber was especially drawn to the tragic death of Hector Morejon, a 19-year-old, who was killed while tagging. Although Saber is an internationally recognized artist, he began as a tagger, leaving his marks on trash cans.

“I felt an affinity to Hector because he was killed tagging,” he said. “I have had friends killed tagging. I talked to his family and he was not a gang member. He had no gang affiliations. He was a kid trying to fashionably fit into his environment.”

The artist is concerned that, since this genre of art has achieved popularity, many have turned their backs on the roots of the work. Young taggers take inspiration from renowned artists such as Saber. Street art exists worldwide. Cities and towns throughout the world are home to street art communities, from which pioneering artists emerge. It is in every city now, but taggers are still being killed for misdemeanor infractions.

“We’ve turned our backs on them,” the artist said. “It’s not cool to be them.”

Saber considers it a victory that his mural remains on the wall of the museum. Although he is grateful that his art remains, he admits that during the weeklong installation, concessions were made. The artist was asked to change the color of Hector’s name from red to blue and was not allowed to add finishing touches that were meant to create a memorial at the foot of the mural. Most troubling, his artist’s statement was taken down off the wall. In the world of conceptual art, the artist’s statement serves to summarize the artist’s message. Random Lengths News has decided to print his statement in entirety for our readers. See “Too Many Names“