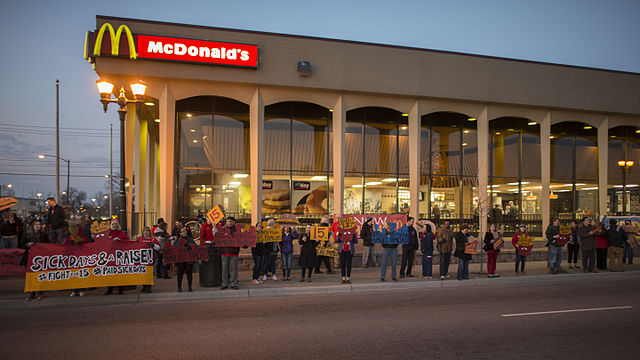 Demanding McDonald’s prioritize public health and worker safety over profits, hundreds of employees at the fast food chain (140,000 U.S. restaurants) went on strike May 20, a day before the company was set to hold its annual shareholders’ meeting.

Instead of  McDonald’s distributing dividends to its shareholders, the striking employees are calling for the company to use its massive profits to pay for safety and financial protections for workers, scores of whom have contracted COVID-19 in at least 16 states so far.

Employees and strike organizers at the fair wage advocacy group Fight for $15 are demanding hazard pay during the pandemic of “$15X2,” paid sick leave, sufficient protective gear for workers and a company-wide policy of closing a restaurant for two weeks when an employee becomes infected, with workers being fully paid.

The strike is taking place at stores in at least 20 cities. Fight for $15 and the Service Employees International Union, which is also supporting the action, say it’s the first nationwide coordinated effort targeting the company since the coronavirus pandemic began in March.

Longtime McDonald’s cook Bartolome Perez joined the strike after having his hours reduced when he spoke up about working conditions during the pandemic.

“They only care for their profits,” Perez told USA Today. “They don’t care for our lives. They show it to us again and again.”

“Workers being able to speak out is key for a healthy democracy and safe society,” Evan Greer, deputy director of Fight for the Future told Common Dreams, a nonprofit news site. “Workers are our first line of defense against corruption, abuse and an essential part of fighting COVID-19. They must feel safe in alerting the public about dangerous threats as they appear. Congress must act now.”

SEIU released a survey of about 800 McDonald’s workers, 46% of whom reported coming to work sick out of fear that they would be penalized if they stayed home. More than 90% of workers said their stores did not supply sufficient face masks.

McDonald’s workers in Chicago filed a class-action lawsuit claiming the company is still not providing enough hand sanitizer, gloves and masks for workers.

“I don’t think there would be strikes happening on 20 cities all on the same day if this was not a widely experienced condition of all workers in fast-food restaurants,” SEIU President Mary Kay Henry told USA Today in response to McDonalds’ denials.