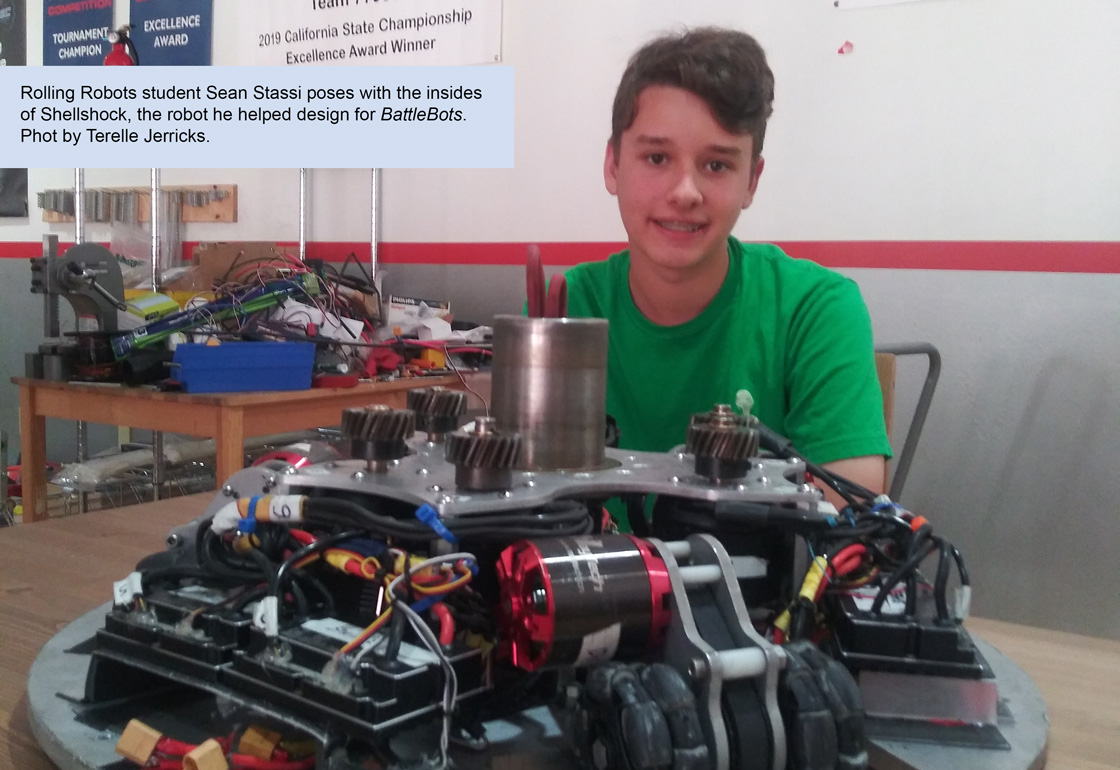 A 250-pound machine created purely for destruction may sound like something from a science fiction movie, but it’s reality for five students from Palos Verdes. They designed and built a robot with solid steel armor that spins three blades at 200 miles an hour. Rancho Palos Verdes residents Sean Stassi and Trevor Heise were featured in the third season of BattleBots, a fighting robot reality series.

The show consists of robots competing in three-minute one-on-one bouts with the goal of destroying or disabling the opponent. If there is no knockout during the battle, a panel of judges declares the winner.

To Kirkman, the fight over converting Pier 400 into a fully automated cargo terminal is an opportunity to further the conversation of building up a new generation of engineers and mechanics to develop, build and maintain tomorrow’s machines.

Stassi, the Competition and Shellshock

Robots became Stassi’s passion before he started grade school when his parents bought him his first Lego set. In elementary school, Stassi joined his school’s  Lego League team. The Lego League was established by the education nonprofit, FIRST (For Inspiration and Recognition of Science and Technology), which was founded in 1989.

Heise, Stassi’s Shellshock team mate and a more senior student at Rolling Robots, had competed  previously in robot competitions, but on a much smaller scale. He had built 20- to 30-pound robots for VEX competitions with other Rolling Robots students, and 120-pound robots for FIRST as part of his high school team. But none of them compared to the monster that was Shellshock.

“Since this is at a much larger scale, [you] need to be a lot more precise with your components,” Heise said. “We had a really fast-moving shell so if that was a little bit off, it could pretty much explode.” Heise was the driving coach, and he helped build the robot.

Shellshock appeared on the show on July 19. It lost to a robot named RailGun Max, which hit Shellshock and flipped it over. The Rolling Robots team was unable to right it and lost because of it. Matches can last up to three minutes if there is no clear winner, but that was not the case in this instance. The referees gave the Rolling Robots team 20 seconds to right Shellshock, but there was nothing they could do.

Shellshock let off smoke after it was flipped on its back and caught fire after the match was over. The insides were badly burned, including the battery, said Bing Jiang, who founded Rolling Robots with Kirkman. However, they were able to replace them.

“Some of the build is not rugged enough to prevent these kind of high impact [hits],” Jiang said. “The big thing we learned is in BattleBots, with high impacts, things are working very differently.”

The team built the Shellshock in about a month, Kirkman said. After BattleBots told Rolling Robots they wanted them on the show, they had 60 days to prepare, but it took 30 to buy all the parts. Making the shell took more than a month.

The time that the Rolling Robots filmed was also a busy time for Heise, as it was Advance Placement test week at his school.

“It was a big time commitment, but in the end I feel like it all paid off,” Heise said. “Having it work and fighting was really worth all the time.”

The Enduring Influence of Apollo 8

Five days a week, Kirkman spends hours teaching, guiding students on math, coding and design. It’s clear Kirkman sees himself in his Rolling Robots students. Kirkman is a child of the ‘60s, inspired by the Apollo missions to the moon.

“As an 8-year-old kid, particularly the Christmas trip to the moon is etched into my mind,” Kirkman said. “That was a big media event, because it was Christmas. All the toys that year were space related.”

Kirkman found that he enjoyed teaching, so he retired from the aerospace industry to found the school.

“I had been teaching at community college and teaching at USC a little bit, and found that I liked teaching, and enjoyed working with these younger kids better than I did the graduate students,” Kirkman said. “I just liked that they’re very curious. They’re here about the fun and the learning. Whereas, by the time you get to college, you’re there for the grades.”

Kirkman and Saluzzi see their work as a possible panacea to the likely job losses due to the further automation at our ports, goods movement system and other industries.

Kirkman recently went to Councilman Joe Buscaino’s office to discuss ways to educate students in the community in robotics as a response to recent Maersk recently bringing more automation to the Port of Los Angeles.

“There’s some concern that a lot of jobs are going to go away,” Kirkman said. “Of course, we’re trying to preserve those jobs, but these kids in 10 years, they need to be able to handle that automation.”

Kirkman wants to create a program in San Pedro for families that work in the port. However, he did not specify what exactly it would entail, but it would offer classes to children and workshops where they can invent things.

Saluzzi sees a Silicon Bay in San Pedro, just as there’s a Silicon Beach in Playa Vista and Silicon Valley near San Francisco.

Los Angeles Unified School District is already on the case,  addressing this labor shortage through career technical education in the industries with the most jobs available. Studies have shown that such classes are popular, but only a quarter of students take courses that could lead to the nation’s biggest industries.

This past April, the Thomas B. Fordham Institute, a conservative-leaning think tank in Washington, D.C. released a first-of-its-kind report that looks at how career and technical education courses match up with U.S. job opportunities.

The study found that more than half of the CTE courses taken by high school students in the Los Angeles metropolitan area are in arts, audio/visual technology and communications; information technology; STEM, and hospitality and tourism. The study found that almost no students take CTE courses in government and public administration, education and training or finance.

Compared to students in the rest of the country, students in Los Angeles take more courses in STEM and arts, audio/visual technology communication. However, they take fewer courses in information technology, manufacturing, business management and administration.

The study also found that the distribution of CTE concentrations in Los Angeles is highly skewed towards fields with higher average wages.

For example, the STEM and arts, audio/visual technology and communications fields (which have average annual wages of $98,000 and $72,000 respectively) account for almost half of local CTE concentrations, but just 4.4 percent of local employment.

Conversely, the study found that almost no Los Angeles students concentrate in lower-paying fields such as marketing; manufacturing, hospitality and tourism, and transportation, distribution and logistics—despite the fact that they support a majority of local jobs.

“We have to train everyone now, Saluzzi said. “The future economy, it’s only a few years away.”

The president’s most recent sit-down interview? As it happens, it occurred last week on “Triggered,” a YouTube program hosted by his namesake son.
Read more
Covid-19

The Long Beach CARES Emergency Rental Assistance Program (LB CARES), which is being administered by the city’s Development Services Department, will provide up to $1,000 per month of rental assistance payments for up to three months on behalf of qualifying Long Beach residents who have lost income due to COVID-19 and meet federal low-income requirements.
Read more