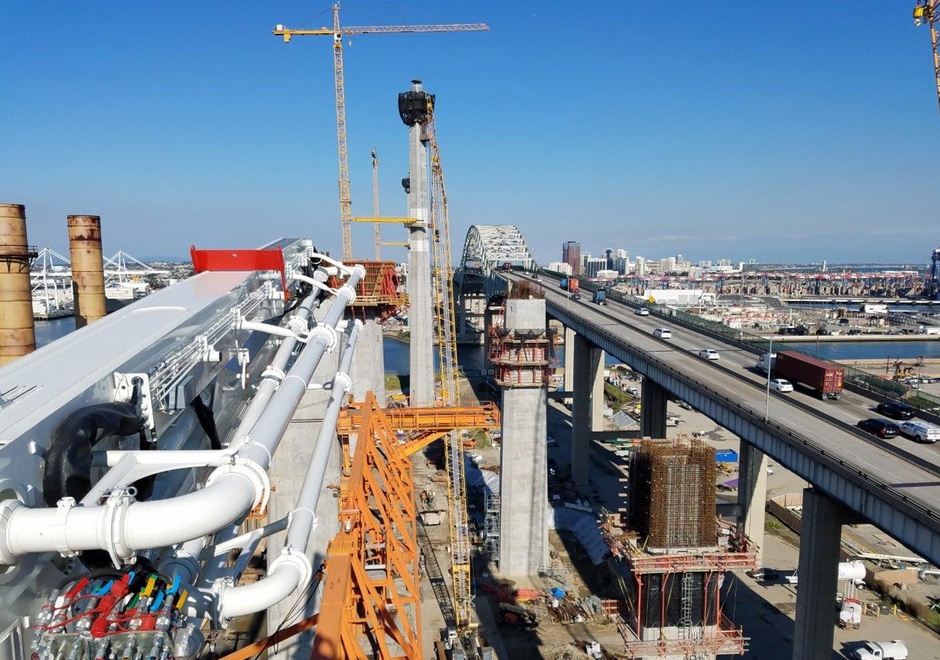 Replacing the Gerald Desmond Bridge isn’t one of Long Beach’s more controversial projects. The landmark 50-year-old bridge, which spans the Port of Long Beach’s Back Channel, is simply no longer up to handling today’s road and harbor traffic. Although it remains structurally sound, chunks of concrete have been flaking off for years, and a safety net has been installed to literally hold some parts together.

What’s being called the Gerald Desmond Bridge Replacement Project is a joint effort of Caltrans and the Port of Long Beach, with funding contributions from the U.S. Department of Transportation and the Los Angeles County Metropolitan Transportation Authority, or Metro.  When the new bridge is completed, Caltrans will take responsibility for operations and maintenance.

Denis Wolcott, who handles media inquiries on the project, provided the following information about the budget, which is currently $1.467 billion:

Wolcott said that, “as of today” the project is on time and on budget, although he added a significantly clarifying point.

“The original project budget was $1 billion when the project began in 2013,” Wolcott said. “Since the project began, the Port of Long Beach has authorized a couple of incremental budget increases to its current level of $1.467 billion.” The difference is because of some changes in the design.

Wolcott also said, “The current estimate is that the bridge could open to traffic as soon as late 2019.  However, given the size and importance of this project — it’s a bridge being built to last at least 100 years — we recognize there could be normal construction delays.”

Today’s largest cargo ships — up to six times as large as fifty years ago—can’t get under the current bridge. The new bridge, with a cable-stayed design, will solve that problem by raising the road deck to 205 feet above water. That will give the new bridge the highest road-deck clearance of any cable-stayed bridge in the United States.

The two 515-feet towers, from which support cables will fan out, are completed and already dominate the Long Beach skyline. They are currently the second-highest cable-stayed bridge towers in the United States—only the Arthur Ravenel Jr. Bridge in Charleston, South Carolina, has taller towers, at 572 feet tall.

With three lanes in each direction plus safety lanes, the new bridge will also be wider and better able to serve the old bridge’s current traffic of  68,000 vehicle trips per day– equal to about 18 million trips a year.  Pedestrian walks and bicycle lanes are also part of the design.

Construction has affected motor vehicle traffic with both long-term and short-term closures and detours. The website www.newgdbridge.com has a place to sign-up for a weekly newsletter that provides traffic updates. People can also download the LB Bridge Mobile App to keep informed of traffic conditions surrounding the bridge construction.

The last of the major road closures is to replace the existing ramp that connects eastbound Ocean Boulevard to northbound I-710. It was closed in mid-2018 to make way for a new connector that will open in mid-2019.

Whether the new bridge will bear the name “Gerald Desmond” is ultimately a question for the state legislature. The old bridge is named after a former Long Beach city attorney and council member.