UTLA Teachers Ratify Contract But Say Fight is Not Over 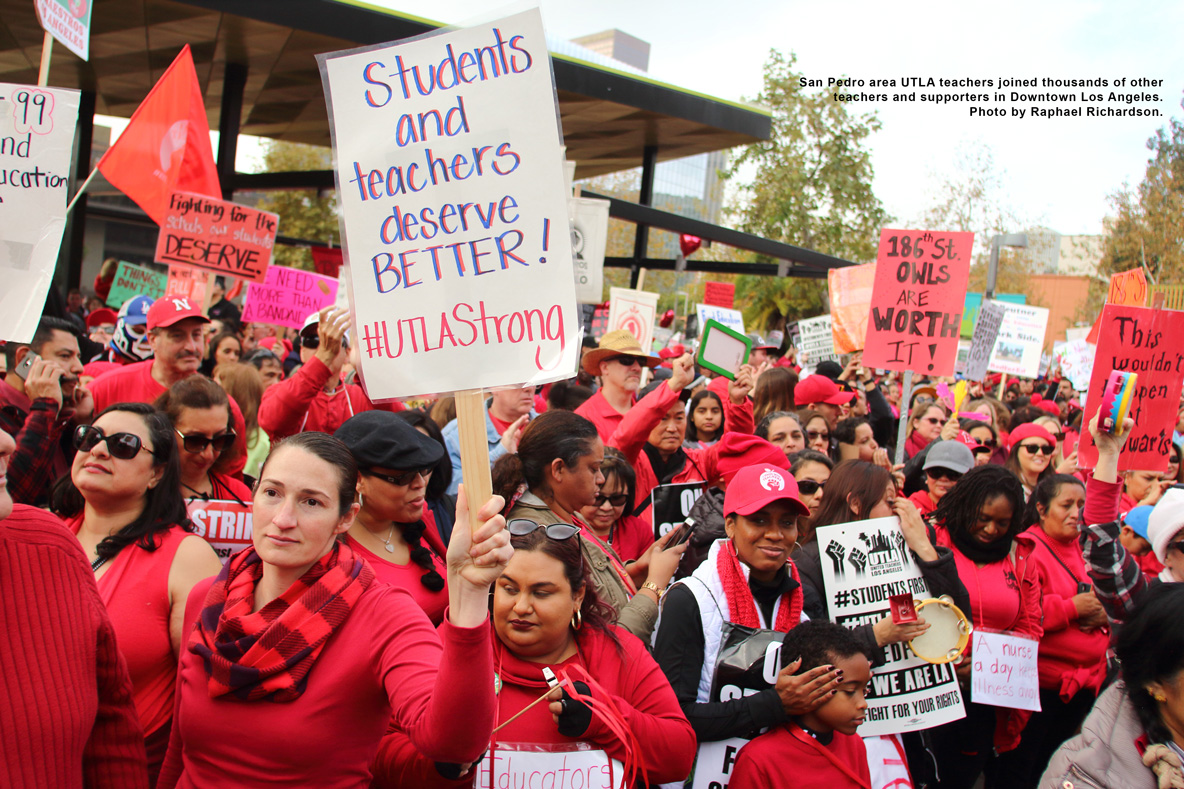 Most teachers disappointed. ‘We could have gotten more, especially class size reduction.’

Rather than a traditional labor contract focused on wages and benefits, the agreement between the Los Angeles Unified School District and United Teachers of Los Angeles after a six-day teachers strike was hailed Tuesday by LA Mayor Eric Garcetti as a first step toward addressing class sizes, reinvestment in existing schools, employee compensation and other issues.

But the strike was so much more for those on the picket line. The great teachers strike of 2019 will be known for its massive rallies of tens of thousands of people, its solid picket lines at more than 1,000 schools and the 15,000 parents, students, community members and other unionists who walked them daily.

The cap on charter schools was bumped up to the state with the hopes that Los Angeles Unified will pass a motion to call upon the state to halt charter school expansion.

“It doesn’t mean much” said Jeanne Allen, the CEO of the pro-charter Center for Education Reform in Washington DC, of the new deals measures.”  The district rolled over on that one to try to make peace…  Schools will continue to be replicated and I don’t think their attempt to control nor stymie public charter schools will be sustained.”

But teachers failed to win any meaningful control over local school decisions, co-location of charter schools on public school property, local school budgets and a fundamental reduction in class-size.

Teachers were elated by the public support they received and hopeful about future negotiations to push for further gains in public education. Richard Henry Dana Middle School teacher Rodney Lusain was one of those.

“This proposed contract was not a home run of a deal,” Lusain said. “The UTLA leadership must still push for our goals, pushing back on the charter movement.  The agreement is not firing us up the big goal still exists, but the fight is not over.”

“We’ve changed the education narrative in Los Angeles and this contract will be the vehicle for enhancing and preserving public community schools,” Bruhnke said.

Dana middle school science teacher, Robyn Meehan, whose classes include 38 or more students, was a bit more conflicted about the contract.

“[The contract] positively addresses the charter issues with hopefully some state commitment,” Meehan said. “We needed more class-size reduction (the contract calls for class reduction of one student per year, up to four over the three-year contract) and thus I have mixed feelings.”

Although more than 80 percent of the union’s membership approved the agreement, many rank-and-file teachers expressed dissatisfaction with it.

“It is a disappointment,” said Tobias Seiple, a teacher at Dana Middle School. “This is a contract we could have gotten without a strike.The solidarity and unity were overwhelming. The issue has never been about pay but about class-size reduction. And all the electives are still massive, 45 students or more. This was a symbolic win, but it initiates change in the state but has not won much for students.”

“The bargaining team could have fought harder to decrease class sizes by pushing for a hiring increase of new teachers,” Smith said. “However, who is to say that the district won’t roll out version 1.5 in the future, which will allow for an increase in student to teacher ratio above the cap limitations?”

Smith said he was hoping for stronger language and action regarding the cap on charter schools in the district.

“The deal basically states that we leave the advocating for capping charter school growth to members of the LAUSD Board of Education [a board that is comprised of mainly charter supporters],” Smith said. “All in all, I’m happy for what we’ve won and I am fired up to fight for what we need! I’m so inspired by this workers’ movement, by our community coming together in solidarity for education justice.”

Lusain believes the strike and the resulting contract, despite its shortcomings, reflects some really important gains.

“Positive aspects of the strike are not reflected in the contract,” said Lusain. “The team building. The connection with the community and the school. The national awareness of the plight of teachers. Kids and parents stayed out in huge numbers facing hardships and the six-day strike could not have gone any better in terms of parent and community support.”

Lusain said most questions are about class-size.

“We were hoping for a much greater swing of the pendulum back towards public education and smaller classes. There is confusion in the contract language about having a nurse in every school.  Does that mean half a day the nurse travels between schools?”

“Rank and file needed a day to process this and consider a counter offer,” said Soni Lloyd, a social studies teacher at Venice High School. “Maybe this was the best we could have gotten, but it is not right to rush the process at the very end.” Lloyd voted no, but more than two thirds of Venice High teachers voted to approve the deal.
Outside the auditorium immediately after the meeting, some teachers said they didn’t like that LAUSD already sent emails to parents saying teachers will back in classrooms Wednesday, with the presumption of a “yes” vote.
“I am just disappointed that we didn’t get a whole night to discuss and vote on the agreement,” said Kathleen Iannacone, a Hamilton High teacher, out on the steps in front of the auditorium. “Well, I am already in my 60’s. My fight was for the new young teachers.”   (From LA Taco, HS paper)

Alex Caputo Pearl explained that some of the money, which district negotiators previously said they could not or would not use, came from the $2 billion reserve. There will be future ballot measures in order to raise more money for public education.

Many would call this a transformative strike, one that could reverse labor’s retreat in the face of attacks against public employee unions across the country.

This strike came as the wave of teacher strikes and massive demonstrations that began in West Virginia won massive public support opposing the deplorable and deteriorating conditions in the schools and the lack of public funding.  The National Education Association ranks California 36 out of 50 states in expenditures per student in fall enrollment.

The support for striking Los Angeles teachers was national and international and began to be a social movement in defense of public education, smaller class sizes, a nurse and librarian in every school, more counselors with fewer cases and an effort to limit the growth of private nonunion charters.

While big money has gone towards privatizing schools and Austin Beutner, formerly a partner of the Blackstone Group (a multinational private equity firm), was hired as the LAUSD superintendent to advance that goal, the UTLA strike slowed that process.  It strengthened the bond between unionists and surrounding communities. It pointed to what is possible for organized labor.

Scores of community organizations brought food and solidarity to the picket lines. SEIU Local 99 engaged in 10 sympathy strikes and other members participated in the pickets. The ILWU was one of the few unions that sent members to the picket lines, revealing a real shortcoming of the strike support the teachers needed from the rest of organized labor. A letter from the Los Angeles County Federation of Labor urged other unions to actively support UTLA, but this rarely happened, a reflection of decades of a weakening of the labor movement and the concept of solidarity, that an injury to one is an injury to all.

The vocal and enthusiastic picket lines, mass rallies downtown and at LAUSD regional sites inspired all working people. Despite efforts by the Los Angeles Times, Daily Breeze and other corporate media and some politicians to pit parents against teachers, they failed.  The outpouring of community support for the teachers, including a march of 1,000 firefighters Jan. 22 in downtown Los Angeles, forced the district to back down on some of its proposals.

The president’s most recent sit-down interview? As it happens, it occurred last week on “Triggered,” a YouTube program hosted by his namesake son.
Read more
Covid-19

The Long Beach CARES Emergency Rental Assistance Program (LB CARES), which is being administered by the city’s Development Services Department, will provide up to $1,000 per month of rental assistance payments for up to three months on behalf of qualifying Long Beach residents who have lost income due to COVID-19 and meet federal low-income requirements.
Read more