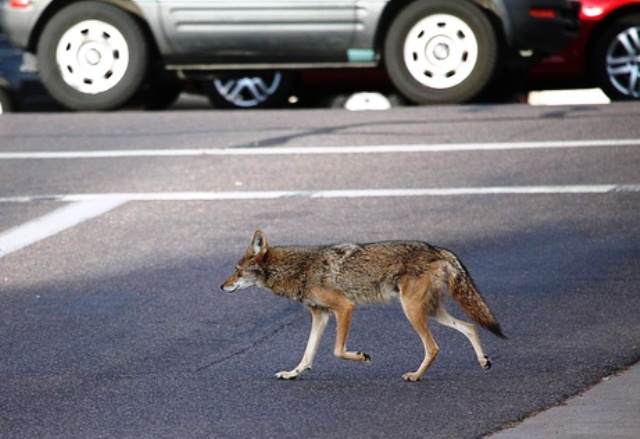 Coyotes on the Rise in Harbor Area

Most people wouldn’t think that an urban landscape would be rife with wildlife, especially in Los Angeles County, the land of freeways and terrible drivers.

However, there is one animal that’s steadily challenging the perception of the typical urban setting. From San Pedro to Long Beach, the canis latrans, the song dog, or coyote, has become a source of discord in the Harbor Area.

Regarded as canine pests, killers of vermin, livestock and pets, coyotes have been the targets of government-sanctioned killing for more than a century. It’s hard to believe an animal the size of a small German shepherd could provoke so much vitriol. But since the arrival of European colonists, the coyote’s image has gone from being respected by Native Americans to straight-up vilified.

In Long Beach, the war against coyotes is being waged specifically in the neighborhoods surrounding the El Dorado Park Nature Center. A recent spike in coyote sightings and pet attacks have riled up residents. In 2015, there were about 223 coyote reports, according to Long Beach Animal Care Services. These include sightings and pet attacks. That same year, Councilwoman Stacy Mungo faced pressure after residents complained about coyotes acting aggressively toward children. As a result, Long Beach Animal Care Services drafted a new coyote management plan.

The plan features a four-tiered response system. Relocating coyotes is against the law in California, so the last resort for officials is lethal trapping. Animal Care Services record coyote sightings and pet attacks and largely teaches residents how to properly scare coyotes away. Ted Stevens, the manager of Long Beach Animal Care Services, said the biggest difference in the new management plan is a lower threshold for employing lethal removal. Trapping and killing used to be authorized only for attacks on a human. That has never happened in Long Beach. Now, officials can  authorize  to trap and kill if there are at least three pet attacks in the same area.

Blue: A coyote is seen or heard in the area. Education and hazing techniques are recommended.

“It’s still kind of early in the season to tell [if it’s working],” Stevens said. “Last year we did have some increase in aggression levels that haven’t been seen in the past. Maybe it was an aberration; maybe it could happen again, we don’t really know. But we’ve always had education as the main focus and we’re going to continue that effort. Hopefully, we can have a peaceful coexistence, but you know, we’re prepared to do what we need to do.”

Again, it’s tough to believe that coyotes are denounced when there’s a gaggle of geese roaming around El Dorado Park free to attack women with baby strollers with impunity. That’s not a joke, that actually happened.

In San Pedro, city officials are still deciding how to respond to citizen complaints.

Yellow: A coyote is seen multiple times in an area with humans or human-related food sources; is not wary of humans; and there are domestic animal losses.

Education and aggressive hazing is necessitated. Increased response and patrols by Animal Control officers may be implemented.

Councilman Joe Buscaino requested revising Los Angeles city’s coyote plan. The plan was released in mid-June of this year, and like Long Beach, it calls for more community education and outreach. In 1994, lethal trapping and killing was banned in Los Angeles. So far, officials seem reluctant to go back to this policy, earning criticism from residents in favor of harsher control. The Facebook group San Pedro Coyote Watch, is full of frustration and anger with the city for what they perceive as a lack of action.

“I just want [the coyotes] to go away. Our animals are prisoners in their own home,” wrote Cheryl Valenzuela. “We pay taxes. This is BULL.”

But scientists have repeatedly said: That lethal targeting does not control coyotes and may even exacerbate the problem.

Since 1931, the U.S. Department of Agriculture’s Wildlife Services has killed as many as 80,000 coyotes a year.  According to the Humane Society, controlled killings are only a temporary solution.

Orange: A coyote kills a domestic animal, enters a dwelling or yard when people are present or acts aggressively towards people. Multiple incidents of this level in the same general area may indicate presence of one or more habituated coyotes.

Education and aggressive hazing is necessitated. Increased response and patrols by Animal Control officers may be implemented and circumstances are discussed by department management.

If three investigated and confirmed level orange incidents have occurred in the same general area within two weeks, targeted lethal removal will be used.

Coyotes are highly territorial animals. Like wolves, territories are held by a dominant female and male, with lone coyotes or floaters scavenging in between areas. Take out the dominant pair, and these transient coyotes will just replace them. By actively removing a portion of coyotes from an area, humans inadvertently decrease the competition for food and habitat.

The Humane Society reported that even if 75 percent of coyotes were killed every year for 50 years, it still wouldn’t be enough to eliminate them. It also found that when aggressively controlled, coyotes can actually increase their reproductive rate by simply breeding earlier and having larger litters. And, larger litters mean a higher survival rate, which equals more coyotes.  That’s right people. No matter what you do, these bitches will always be one step ahead.

David Thraen, executive director of All Wildlife Rescue and Education, a nonprofit rehabilitation organization in Long Beach, said coyotes do more for the environment than we give them credit for. In fact, they’re a keystone species, meaning other animals largely depend on coyotes to keep the ecosystem in balance, keeping the rodent and small mammal populations in check. It’s all very Lion King.

Red: Coyote involved in an investigated and documented attack, either provoked or unprovoked, on a human. City staff will notify California Department of Fish and Wildlife, which assumes the role of lead agency, and will work with local authorities to eliminate responsible coyotes.

“They do serve a purpose,” Thraen said. “They’re like Mother Nature’s pest control. If it weren’t for the coyotes, then we would have a big squirrel problem…But they’ve been able to find a food supply, and adapt to the environment as it changes. So the number one thing is to get rid of the food source, and the coyotes will migrate elsewhere.”

This food supply is from us. Specifically, from our garbage, the pet food we leave outside, the seeds scattered on the ground from bird feeders, fallen fruit from trees and of course, pets.

The coyote management plan implemented by Long Beach has a checklist for residents to make suburban neighborhoods less tempting places for coyotes to grab an easy meal. Suggestions include keeping pet food securely inside, keeping trash cans secure, cleaning up stray seeds and fruit on the ground. Additionally, city officials suggest keeping vegetation trimmed back and restricting access to decks and sheds to reduce neighborhood hiding places and denning sites. The idea is to push coyotes out of residential areas and back into open and natural areas.

Thomas Dewey, a retired craftsman in El Dorado Park Estates, has lived in Los Angeles County his entire life. Dewey said he’s  seeing coyotes out and about, although he’s never seen any in Long Beach.

“I knew people who lost cats in Griffith Park,” Dewey said. “This was before the mountain lions became a problem. People would see [coyotes] an awful lot. But I never got close enough to be threatened by them. I can see how it would make some people nervous, but it doesn’t make me nervous.”

Ted Stevens said that the way to prevent attacks on cats and dogs is to keep cats inside, and small dogs supervised outside. He stressed that coyotes are opportunistic hunters. They’re looking for the easiest meal. If they don’t come across pets or pet food while hunting, they’ll go back to their natural prey, leaving little Tigger in peace.

Martin Byhower, an environmental and biological consultant, said that when it comes to biodiversity, outdoor house cats are more of a hindrance than the coyotes.

“God, they’re terrible,” Byhower said. “Outdoor cats kill so many [native] birds, I think the number is in the billions. They’re killing machines. And this is not a value judgment on cats themselves, it’s just a fact. There are so many things that can happen when you let your cats run free, and actually indoor cats live longer. People talk about animal cruelty, but if you look at the way animals die because of outdoor cats, it’s just incredible. But it’s out of sight, so you don’t usually see it.”

Most of this information has yet to deter the residents hellbent on completely removing coyotes. Several members of the San Pedro Coyote Watch group have frequently complained about the number of actions that humans need to take in order to peacefully coexist with this animal.

But Dewey has taken a different tactic.

“I see it as a problem we’ve created,” Dewey said. “So I wouldn’t really blame the coyotes.”