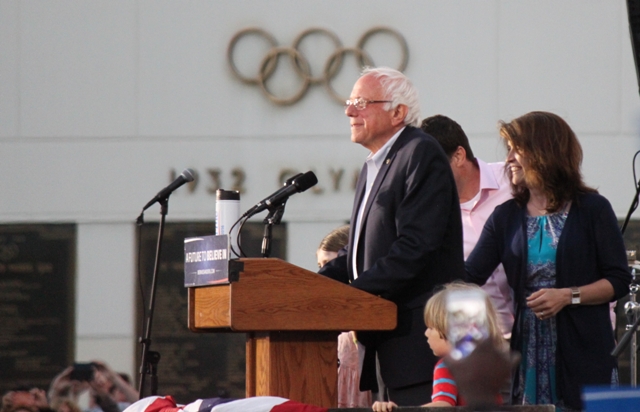 In the Los Angeles Harbor Area, Sen. Bernie Sanders found broad swaths of support, particularly in Wilmington and San Pedro, though not enough to turn them into “Bernie-towns.”

More specifically, Sanders and Hillary Clinton finished in dead heats in precincts covered by the Central, Coastal and Wilmington neighborhood council districts, while Clinton had a commanding majority in the Northwest San Pedro Neighborhood Council District.

In the county supervisor’s race, Rep. Janice Hahn won the primaries by 27,000 votes.

Wins in the Long Beach and Los Angeles Harbor Area, assured victory for the congresswoman. She also edged out her nearest rival, Steve Napolitano, in the beach cities but the margins were much narrower.

Hahn garnered 55 percent of the vote in the neighborhood council districts of Wilmington and San Pedro, where she served three terms as Los Angeles City councilwoman.

Hahn focused her campaign on Los Angeles County’s growing homeless and mentally ill populations, its transportation system and crime. She has frequently contended that with Congress locked in perpetual gridlock she believes she can get more done in local office.

“My father, beloved County Supervisor Kenny Hahn, always stressed to me the importance of being a champion for the people,” said Hahn when she announced her candidacy in February 2015. “He instilled in me the values of courage, integrity and public service and, most importantly, the simple principle of always putting constituents and local neighborhoods first. With that philosophy in mind, I have decided not to run for re-election to Congress and instead enter the race for Los Angeles County Supervisor District 4.”

Though the county supervisor’s seat is nonpartisan, Hahn is a Democrat and has been endorsed by fellow Democrats on the board, including Mark Ridley-Thomas, Hilda Solis and Sheila Kuehl

The members of the dynasty opposing Hahn aren’t related by family blood, but by political philosophy and orderly tradition. Steve Napolitano, the former mayor of Manhattan Beach, has served as chief deputy on outgoing Supervisor Don Knabe’s staff since 2005. By pursuing his boss’s job—with his boss’s endorsement—Napolitano is also following in Knabe’s footprints.

Knabe, a former mayor of Cerritos, was first elected to represent District 4 on the Board of Supervisors in 1996, when he succeeded his boss, Deane Dana, for whom he had served as chief of staff. Dana, who was retiring after 16 years as a supervisor, endorsed Knabe for the job.

All three men are Republicans.

Napolitano describes himself as a fiscal conservative but a social progressive. He and his family reside in Manhattan Beach, where he has lived all his life. While serving on that city’s council, he worked as a part-time teacher and put himself through Loyola Law School. He passed the bar in 2000.

Warren Furutani came in second overall, after decisively winning nearly half the precincts in the Los Angeles Harbor Area and finishing second in Carson. Steve Bradford won overwhelming majorities in Carson, Compton, Inglewood, Gardena and the South Los Angeles neighborhood of Athens. Compton City Councilman Isaac Galvan also made strong showings in Athens, Inglewood, Long Beach and Compton, placing second behind Bradford in those areas, but a close third overall. Galvan was a couple of percentage points away from beating Furutani to make the runoff with Bradford.

The close race may have resulted from  the  Galvan campaign’s misleading mailer to San Pedro residents trying to link former Assemblyman Furutani and Random Lengths News Publisher James Preston Allen to the tiny houses controversy that erupted in 2015.

Galvan, the first Latino member of the Compton City Council, and also the youngest council member at 26, was investigated by the Los Angeles County District Attorney’s Public Integrity Office regarding his ties to Pyramid Printers and its owner Angel Gonzalez. Reportedly Galvan was employed by Pyramid but Gonzalez, who was convicted in 2002 of sending out misleading campaign mailers, was also recently hired as Galvan’s assistant.

Galvan’s campaign site says he runs his own graphics and printing brokerage firm but nothing about Pyramid or Gonzalez.

Bradford has been endorsed by Rep. Janice Hahn and Isadore Hall to fill the open Senate District 35 seat.

He was the first African American elected to the Gardena City Council, where he served for 12 years. He was then elected to represent Assembly District 51 in a 2009 special election. That followed a fullterm beginning in 2010. After redistricting, he was elected in 2012 to the Assembly District 62.  He helped pass 42 bills during that time. He served as chairman of the Select Committee on the Status of Boys and Men of Color.

In a Feb. 10 interview Bradford told Random Lengths he’s running because of his commitment to public service, especially in regards to unresolved issues and unfinished business he left in Sacramento.

He said that the most important issues are employment—“making sure we go back to work”— quality of education, and reform of the criminal justice system.

This past April, Svolos explained that although Senate District 35 isn’t a Republican district, she considers herself a moderate.

Furutani, who served on the board of the Los Angeles Unified School District, the Los Angeles Community College District Board of Trustees and three terms in the state assembly, may be the best situated to pick up votes in the areas Galvan won.

Isadore Hall III won the primary by a healthy margin—33 percent to Nanette Barragan’s 19 percent—but well short of the 51 percent needed to avoid the runoff in the general election in November.

The time, effort and local endorsements paid off with a win in San Pedro for Hall. The state senator also won Compton, Carson, Long Beach and Lynwood.

The former Hermosa Beach Mayor Pro Tem garnered enough votes to compete in the general election, but probably has more than a fighting chance of winning the seat as a real estate brouhaha exploded at Hall’s victory party on election night.

Hall was served a subpoena by tenants of the Alameda Court condominium in Compton who are involved in a legal fight with the building’s owners to stay in their homes. In court documents—made available by the Barragan campaign—the plaintiffs alleged that Hall, also a tenant in the building, received preferential treatment. This was allegedly because of his role in getting the project approved almost 10 years ago, while he was a Compton city councilman.

Interestingly enough, Hall was served an eviction notice in 2015 for nonpayment of rent and utilities by the owners of Alameda Court—documents also publicly released by the Barragan campaign.

The tenants’ case is scheduled to be in court in October, just before the general election Nov. 8.