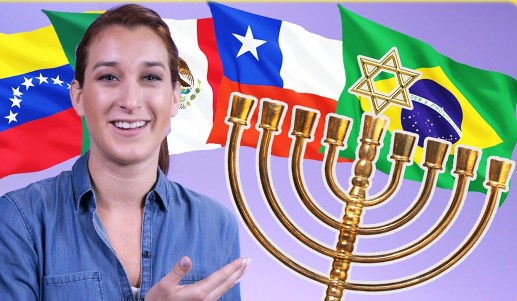 Despite not having much money, sharing her home with her large Mexican family made Tila Carrol’s childhood a happy one. While her upbringing was monolingual (only Spanish was spoken at home), her faith was dichotomous. Her home was Lutheran and Catholic.

But neither religion seemed to satisfy her curiosity about life’s most complicated questions, such those related to creation and life after death. So, when she turned 18, she began exploring other faiths, most of which did not offer much room for free thinking or expression.

It took her about 12 years to find a faith that helped her find some answers: Reform Judaism.  Carrol was attracted to Judaism because she could learn about it, but the answers aren’t all scripted and pat, such as, “there aren’t answers in life sometimes.” Judaism fit into her way of thinking about life and her philosophy. Her family didn’t oppose her very much, besides a few questions about why she was converting at the time.

“Judaism didn’t have all the answers, but it allowed me to be a person that could question, which wasn’t allowed much where I was brought up,” said Carrol, a member of Temple Israel in Long Beach.

She is a panelist for The Jewish Story, a conversation about the experience of modern-day Latinos, who also happen to be Jewish. These intersecting identities are often less visible. Most people assume that Latinos, by the mere fact that many trace their ancestry to traditional Spain or Portugal, are universally Catholic.

“People should expect to hear stories that are very different than the dominant narrative of the American Jewish experience,” said KPCC reporter Adolfo Guzmán-López, a congregant moderating the panel.

The modern Jewish experience in the United States is largely perceived as an experience of European and Eastern European Jews.

“It’s important because … [there are] many types of diversity there is in this country,” Guzmán-López said. “Diversity also exists within religions. It’s important to understand that Latino immigrants — while they’re mostly working class and Catholic — come in other shapes and sizes.”

The panelists will discuss how they navigate between the different worlds of being Jewish and Spanish speakers from Spanish-speaking countries, said Guzmán-López. He said they will talk about how they combined these two cultures into their daily and family lives.

Jewish Latino heritage is unique in the community because of the Jewish experience in Spain hundreds of years ago and the important and influential Jewish population that emerged out of Spain, Rabbi Steven Moskowitz said.

“The Hispanic and Latino population is such a significant part of the diversity that is both Long Beach and California as a whole, so it’s important for us to appreciate that our congregational community is a reflection of that wonderful reality,” Moskowitz said.

Long Beach is also one of the most culturally and ethnically diverse cities in the United States. Over the past few years, there have been an increasing number of members of Temple Israel congregation with Latino or Hispanic heritage. Exploring Jewish Latino heritage is part of an overall exploration of the cultural diversity within the Jewish congregation, Moskowitz said.

Two other panelists will discuss The Jewish Story through their lens. Cuban-born Ross González, who traces his roots to Turkey and Spain, will discuss how his family ended up in Turkey because of the Spanish Inquisition.  And, Mexican-born Gabriel Lopez, who traces his roots to Mexico and Eastern Europe, is the ritual chair at Temple Ner Tamid in Downey.