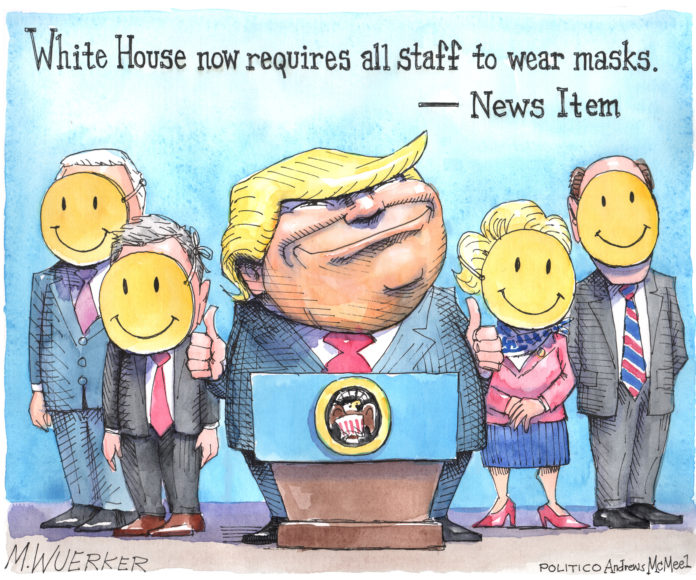 Just this week, the U.S. death toll from the COVID-19 pandemic passed 100,000. It seems like such a long time ago that candidate Donald Trump kept saying, “We are going to Make America Great Again,” and that “We are going to win so much that you’ll get tired of winning.” See the actual video clip here: https://tinyurl.com/trump-albany-rally.

Well, we’re still waiting to see what “winning” looks like because from this point of view, America seems to be losing the COVID-19 war while simultaneously tanking the longest running bull economy ever as DJT goes golfing. Reminds me a lot of Alfred E. Newman’s cartoon in Mad Magazine who famously spouts, “What, me worry?”

Donald appears not to worry about the coronavirus as much as he does about being compared to President Barack Obama, or his taxes being exposed or much else except what it would mean if he didn’t get reelected. The term “loser” comes to mind and getting him kicked off this real-life reality TV show would just be too exquisite to express.

However, it is a fundamental mistake to think that Trump and his pals are men without a plan. It’s just they don’t have a plan that includes protecting Americans from the COVID-19.  Let me explain.

While we have all been either distracted by the pandemic or quarantined, the real plan is to just deconstruct all of the “big government” that the Republican Tea Party radicals can get away with, like destroying the U.S. Postal Service, deregulating the Environmental Protection Agency, defunding the Centers for Disease Control and Prevention, the World Health Organization (and a string of other science and health departments meant to protect Americans from just this kind of pandemic) and even going so far as to rid these agencies of anyone who doesn’t support the use of hydroxychloroquine as the cure-all for COVID-19.

This drug, as you’ve undoubtedly heard about by now, is what DJT has self-prescribed (if he is to be believed, which most of us don’t). The common side effects of hydroxychloroquine include: headache, dizziness, ringing in your ears, nausea, vomiting, stomach pain, loss of appetite, weight loss (which might do him some good), mood changes, feeling nervous or irritable (which might just explain his midnight Twitter rampages), skin rash or itching  or hair loss (we could only hope).

Don’t be distracted by his campaign ploy of the week like “Obamagate” or “Liberate Michigan.” Keep your attention on what’s really going on, especially at the other end of Pennsylvania Avenue where Republic Senate Majority leader Mitch McConnell is busily stacking the federal judgeships with rightwing ideologues.

Remember, “Moscow” Mitch, as he is now called, is the senator who stood in the way of President Obama appointing Merrick Garland to the vacant seat left by the sudden death of conservative Supreme Court Justice Antonin Scalia. Well, just wait until the election results come in on Nov. 3. When DJT loses to Joe Biden, old Mitch will be stacking the courts faster than a three-armed bricklayer on Adderall.

Meanwhile, local congressional repre-sentatives are ringing the alarm bell about the Trump administration actively trying to take away healthcare coverage from millions of Americans in the middle of this pandemic. Congressman Alan Lowenthal (D-Long Beach) writes, “This isn’t the first time Donald Trump and his GOP allies have tried to obstruct American healthcare. His administration has always been intent on dismantling the Affordable Care Act—and due to his attacks, millions of Americans are now uninsured. [He] still doesn’t have a plan to cover coronavirus treatment for uninsured Americans, despite promising to do so months ago when this crisis began.”

In other words, stopping large corporations from making even more profits at the detriment of the general public or their workers is a problem. We have all witnessed this tactic of using “fiscal conservatism” against public schools and colleges, public health care systems and even now with the U.S. Postal Service.  The tactic is used to defund them on the grounds of saving taxpayer money. If these systems survive the budget cuts, they then claim these systems are inefficient or don’t work. This was done while raising the military defense budget from $316 billion in 2001 to over $685 billion in 2019.

Now let me ask you just one simple question — would a rational plan for the defense of our nation be to take just 10% of that defense budget to protect America against the current or future diseases? Would there not have been enough personal protective equipment in the National Strategic Stockpile if this had been done in the past three years?

Or has this administration cheated you, the taxpayer, by pouring billions into weapons and a Mexico border wall that can’t even stop the invasion of a single virus to the detriment of our national economy. Obviously, the Federal Reserve has the money to pay for many things, but only if Congress approves the spending.

At this point, if this is what he calls “winning,” I’d hate to see what losing looks like because 100,000 fatalities in four months is more than we’ve actually lost fighting the last three wars.