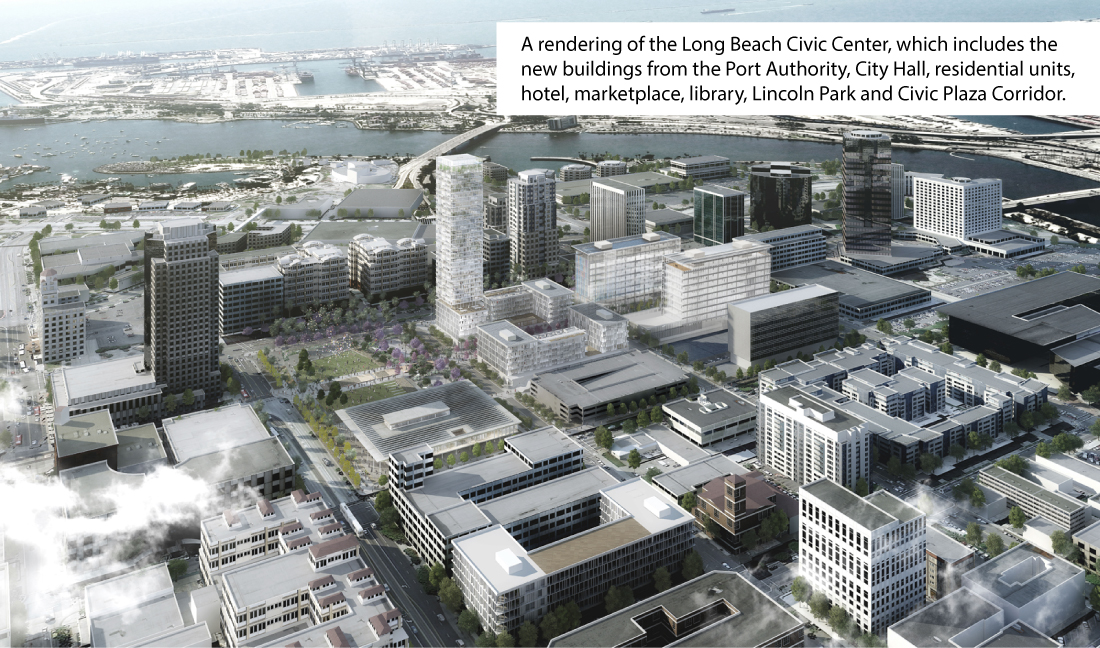 As part of a massive downtown civic center development, Long Beach is planning to shut down its existing downtown library on Jan. 19, in favor of a more environmentally-efficient one, scheduled to open summer 2019. The current civic center, including the main library, was built in 1976 in Lincoln Park, bordered by Ocean Boulevard on the south, Pacific Avenue on the east, Broadway on the north, and Magnolia Avenue on the west. The new project preserves the general location, but the existing city hall and library are being demolished to make room for retail and residential development along with what the city is calling a “re-envisioned” four-acre Lincoln Park.

Plenary-Edgemoor Civic Partners is contracted to design, build, finance, operate, and maintain the $520 million civic center for the next 40 years.

Besides a new library, plans call for an 11-story city hall and an 11-story headquarters for the Port of Long Beach, along with a reconfigured flow to downtown traffic and more allowances for bicycles and pedestrians.

The artist’s rendering on the developer’s website shows the new Port of Long Beach headquarters and city hall to the west, and a residential and commercial development in the center, with Lincoln Park and the new library in the east. Centered between the work area of the civic block and the play area of the park and library will be new residences and commercial units, including a 36-story tower that will serve both as a hotel and as residential space. Around the tower will be a commercial, pedestrian-friendly “market space.”

Plenary-Edgemoor touts the new library as the “jewel of the park,” containing all of the services provided in the existing Library in a spatially and operationally more efficient building.

According to a 2017 press release from the City of Long Beach, the entire new civic center will be more environmentally efficient, too. For example, the new library will have a Leadership in Energy and Environmental Design (LEED) gold rating, with a large solar area across the roof generating all the building’s power.

Plenary-Edgemoor adds all of it will blend seamlessly into the neighborhood. “Our Project will re-introduce Chestnut and Cedar streets to the Civic Center — to make it more open and inviting to pedestrians, bicyclists and vehicles. Next, we will extend First Street across the site– to connect east to west. These simple actions will form an urban framework of smaller blocks that will knit the downtown back together and create a new pedestrian environment,” according to a company press release.

The plans also call for new commercial and residential development along Third Street and Pacific, along with reconfigured flow of downtown traffic, and allowance for more bicycling and pedestrian traffic.