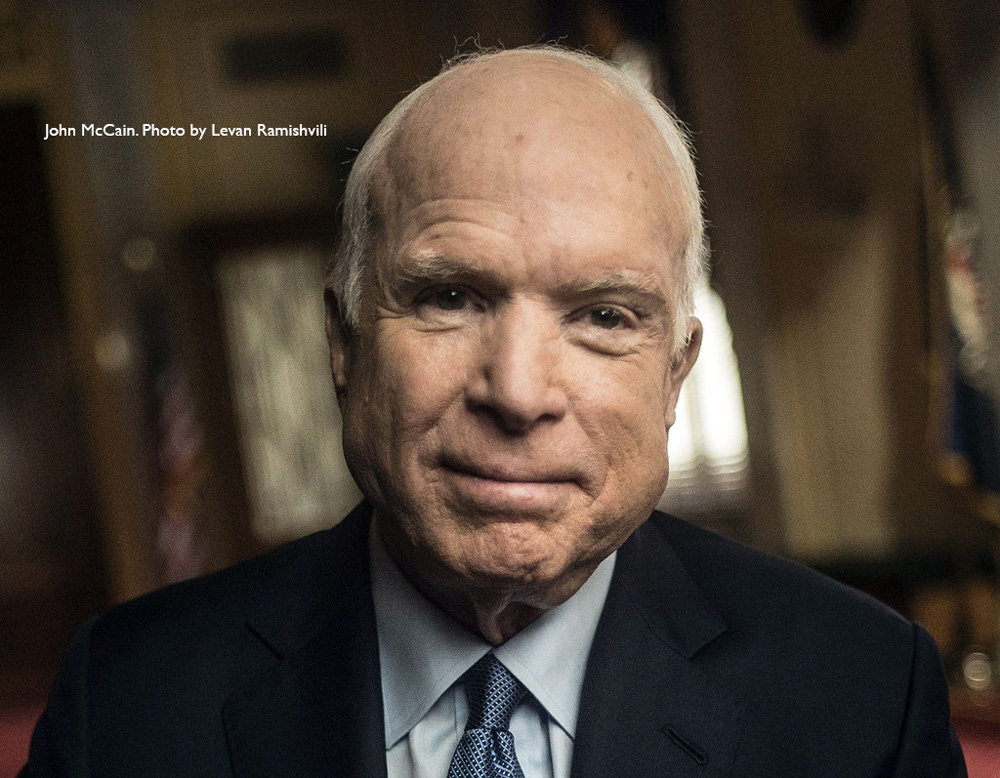 I was never a fan of Arizona’s Sen. John McCain. It is only belatedly that I’ve come to admire him for his reputation as “maverick” given his thumbs-down vote preserving the Affordable Care Act against the Republican Senate majority.  He truly was a maverick and if his politics had been a bit more to the left, he just might have made a great president. Although, I won’t ever forgive him for choosing Sarah Palin as his running mate in the 2008 election.

His preplanned national funeral, however, was probably the most significant political act  of defiance of his career. It forced the Washington establishment to join in a poignant one-finger salute to He-who-was-not-invited.  Clearly, by the list of who was invited to speak and by what was said, McCain’s intent was to bring the nation back to some rational civility and common grounding in the basic creed of American beliefs.

The funeral absorbed the entire news cycle for more than two days. The funeral had effectively pushed No. 45 to the periphery of the news cycle and brought much of the nation back to the fireplace via the national network news for two hours. The spin was provided by the significance of the ritual itself and by who said what.

Both Meghan McCain, the senator’s daughter and President Barack Obama took swipes at the current President. Meghan’s eulogy was so heartfelt and compelling that none of the people who watched it could keep a dry eye. It was her most defining statement and she delivered it with such courage that it set the tone for much of what followed.

At one point, in reference to the Trump campaign’s slogan, Meghan said, “The America of John McCain has no need to be made great again because America was always great.”

Obama too, with a much more subtle critique, derided those who traffick in “bombast and insult and phony controversies and manufactured outrage.” He also attacked, “politics that pretends to be brave and tough but in fact is born of fear.”

This, of course, was in contrast to the man everyone came to mourn — a celebrated national hero, Navy veteran and POW, who endured torture when he was captured in Vietnam.

The kerfuffle over the White House raising the flag before a sufficient amount of time had passed after McCain died was just one more of the trivial distractions to which this nation has become accustomed. This includes the current state of affairs in which we have 24-hour news coverage of the current president’s tweeted insults, falsehoods and half-truths.

Since the national funeral, there is the glaring recognition that the midterm congressional elections is a battle between two very distinct visions of America. This is evidenced by the fact No. 45 is and had been hurriedly hopscotching across the country to rally his base to forestall the “blue wave” that’s threatening to take over Congress and potentially have him don orange jumpsuit and handcuffs.

As much as No. 45 has divided this country with his stupid, racist and delusional social media attacks, he has unified a resistance that we have not witnessed since Richard Nixon held that office. Some even labeled the ceremony as the Resistance Meeting. The floodgates of the resistance seem to be busting open now with new information and not just with the Robert Mueller investigations, but with several recent books and a new documentary film.

Potentially, the most damaging is the recently released documentary, Active Measures, directed by Jack Bryan. The film starts by summarizing Vladimir V. Putin’s career through the time of his election as Russia’s president. In the heaps of interviews, video clips and flow charts, Bryan outlines the links between Putin and No. 45, Paul Manafort extensive work for Russia and the foreign shell companies that launder funds for Russian organized crime into the United States.

If even half of what is revealed in this documentary can be proven in court, No. 45 has a great deal to worry about beyond this coming election.

Then there’s Bob Woodward’s latest 448 page book, Fear: Trump in the White House. Woodward provides an unprecedented look inside this president’s inner circle. This book uses confidential interviews to show how some of the president’s own advisors view him as dangerous to our national security and some who have sought to circumvent the commander in chief.

All of this and Judge Brett Kavanaugh’s appointment to the U.S. Supreme Court has truly galvanized the Democrat’s resistance in a way that was not foreseen a year ago. Clearly, more and more people are seeing this presidency as not only deleterious to our nation but as an existential threat to our republic and our democratic institutions.

I’m sure the late senator relishes the thought that his passing instigated this, but he probably never imagined he would become a symbol of the “Resistance.”  I never would have thought it possible either.