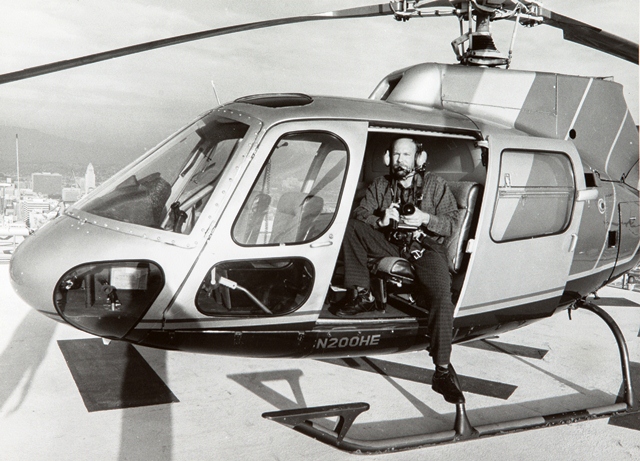 Michael Justice was the quintessential photographer stricken with wanderlust. During his long career, Justice followed his camera to assignments in 62 countries. By the time he landed in San Pedro, a little bit of that wanderlust had worn away.

Random Lengths News began collaborating with Justice in 2008, when he shot photos for its publication HarborLiving.

As the managing editor, I worked closely with him. He was a great photographer with an interesting back-story.

On Jan. 4, Justice died in a helicopter accident. He and the helicopter’s pilot, 41-year-old Christopher Reed, were pulled out of the two-seater copter that crashed near the San Pedro breakwater the next day.

Justice was doing some aerial photography for the Port of Los Angeles for whom he had worked since 2010.

“Michael was one of the best photojournalists who I’ve had the opportunity to work with over the 36 years [of this paper],” Allen said. “I considered him as something more than a colleague. He was my friend and I’ll miss him…. The irony of Justice’s death is that after traveling the world in places more dangerous than this, he died less than a mile from his home on a routine assignment.”

“It’s a sad day for the Port of LA and the photojournalism community,” POLA spokesman Phillip Sanfield said. “We are feeling his loss deeply.”

Justice, 61, was born and reared in Torrance. He’s been a freelance photographer for almost 30 years. He discovered his love for photography at Torrance High School, where he took a class in the subject. At the time photography equipment was very expensive, but Justice stuck with it. He perfected his craft at the Pasadena Art Center College of Design in Photography, California State University Long Beach and Brooks Institute of Photography. It took time for him to be able to invest in his craft, but it paid off his sister Lori Mahler recalled.

“He’d travelled the world,” Mahler said. “We were very close.”

“He was always at his happiest when he was shooting photos,” Warren said. “I’ll always remember him for his love and passion for photography and his dedication to his family and friends…. Michael was one of the funniest, energetic and caring people.”

Justice is survived by his two sisters, Leann Atwater and Lori Mahler, and several nieces and nephews. A celebration of life reception took place at Ports O’ Call Restaurant in San Pedro on Jan. 13.