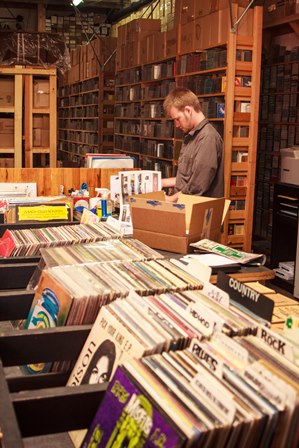 There were always a few holdouts: A small core of collectors who held on to their turntables and never placed their albums on the lawn at a yard sale.

Now, those collectors have been vindicated. Dig out your turntable. Vinyl is back in a very big way.

In 2008, organizers in San Francisco created “Record Store Day,” a day to spread the word about the unique culture thriving at independent record stores. The day is now celebrated at record stores on every continent except Antarctica. Boomers are watching their grandchildren joyfully embrace the beloved pastime of combing through record store racks, searching for that one rare prize and rejoicing at a discovery to add to their collection.

Jim and Dacie Callon of JDC Records have brought their record distributorship back to San Pedro after spending almost 20 years in Hermosa Beach on and around Pier Avenue. Music fans will remember JDC Records. The Callon’s original location was on Pacific Avenue across from Fort MacArthur, before it moved to 5th Street.

JDC records in now comfortably in downtown San Pedro on 6th Street, near Pacific Avenue. The massive inventory of vinyl has found a new home right behind San Pedro Vapes (a discreet entrance off the alley will get you in the back door). Go in the back and you will find records, CDs and even tapes stacked literally to the ceiling.

Jim Callon says he is happy to be back in his hometown. Starting June 5, the store will be open for the First Thursday Art Walk. Jim has even promised to have live music for the event. For now, he is open Monday through Friday 11 a.m. to 5 p.m.

The Callon’s have spent almost 40 years in various aspects of the music business. As a musician, Jim Callon founded his JDC Record label in 1977 with two rhythm and blues disco hits. His controversial move from rock to disco may have cost him friends, but when he began distributing 12-inch vinyl, he hit pay dirt as the largest distributor of dance music on the West Coast.

In 40 years, you see a lot of trends come and go, but Callon has remained inventive, persistent and flexible. His former clients Tower Records and Music Plus are history, but today he is distributing vinyl to the newly popular independent record stores across the country and internationally.

A young record collector, Michael Castanon, recently told me of his attraction to the organic, warm, analog aesthetic.

“I enjoy it because it is more of an experience,” Castanon said. “When you listen to an mp3 it is like a buffet: not completely satisfying. But when you put on a record you are fully experiencing it. The warmth and the sound you get from vinyl are much better. If I press play on my iPod I do not feel connected to that music. When I physically go through my records, take a moment and pull out a record, glance at the cover art, [and] I put it on my record player with the intention of listening to it from start to finish.”

Some of us from the 60s generation may be surprised to know millennials could hold still long enough to listen to one complete side of an album, let alone BOTH sides. Remember, you can’t carry this music in your pocket or load it onto your cell phone. You can leave the room, but you can’t go too far.

“A lot of these kids have never heard analog before,” Callon said. “My theory is that when they get into their parents record collection for the first time, the sound is unique to them. Regardless of who the artist is, they become fascinated.”

Another attraction is the somewhat short supply of the records. Vinyl records are still pressed on just a few antiquated press machines left in the country. Sales of vinyl around the globe have climbed from $55 million in 2007 to $171 million in 2012 and are still climbing. Pressing plants are feeling the strain of increasing demand for vinyl albums and they’re ramping up production, working overtime to fill orders.

Callon had the foresight to purchase inventory of records from warehouse stock back in the 90s and he still has much of that inventory, as well as growing his stock through purchases directly from the pressing plants.

The technology for pressing records may not have changed, but the technology surrounding turntables and speakers is 21st century. The newer turntables are an investment. Audiophile turntables no longer require a receiver; powered speakers are plugged directly into the turntable via a preamp. Needle cartridges are adjusted to float lightly on the vinyl, barely touching the record. The base of today’s turntables are heavy to prevent movement. My generation will still recall the movement and skipping that was caused once the party started and people began to dance. That problem is avoided with the heavier more stable turntables of today.

This generation has brought back much of the enjoyment of album rock Castanon tells us.
“I go to The Prospector in Long Beach and the DJ plays Pink Floyd The Wall start to finish.” Castanon said. “Or, they will play Blondie Parallel Lines start to finish. Those are the type of bars I like to go to.”

The lesson to be learned here is: Don’t throw that shit away!

Just as surprising as the resurgence of vinyl – maybe even more surprising — is the return of cassette tapes. JDC Records has a large inventory of music on cassette tapes. As with vinyl, the analog sound is warmer. Occasionally rare recordings can be found more readily on tape. New music is being released again on cassette. And don’t overlook the advantage of portability and headphones with cassettes.

So now, where did I put my Walkman?