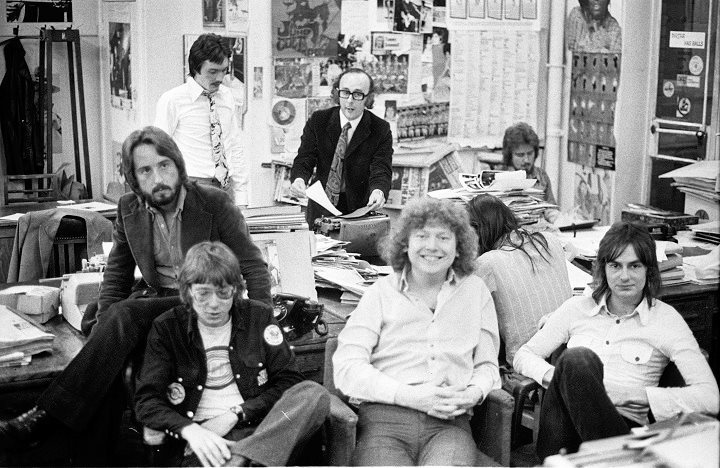 It was a chance encounter. A young photographer, Barrie Wentzell, tells the story of being at the BBC Studios — it was October 1965 — to shoot some pictures during the taping of the weekly TV show Top of the Pops. He had ventured up to the rooftop bar during a break.

“Diana was sitting at a table talking to a reporter from the Melody Maker and I asked her if it was O.K. to take a few pictures of her while she was being interviewed,” Wentzell said. “She smiled and said that it would be fine. After she left, the reporter suggested that I send some pictures to the Melody Maker, which I did, never thinking that they would be used. The following Wednesday, I saw the paper at my local newsstand and there was my photo on the front page along with my name credited. Wow! A few days later, I got a call from Bob Houston, Melody Maker’s assistant editor, offering me a job as chief freelance photographer, which I gladly accepted; thanks to Lady Diana Ross!”

This happy accident began Wentzell’s decade-long adventure with the most renowned music publication of the time. Melody Makers, a documentary film directed by Leslie Anne Coles, details how the magazine shifted the focus of its coverage from jazz to rock ’n’ roll and consequently helped define music journalism and rock photography. The multi-award winning film festival darling recently screened in Los Angeles.

Founded in 1926, Melody Maker was one of the world’s earliest music weeklies. It began as a musician’s trade paper, listing gigs and services, advertising for the BBC Radio program and writing about the musician’s union with a concentration on jazz.

In her film, Coles tells the story of Melody Maker’s steady evolution and growing influence through the lenses of Wentzell’s cameras with the perspective of his experiences as chief contributing photographer from 1965 to 1975. During those years Wentzell photographed The Who, The Beatles, Eric Clapton, Jethro Tull, Yes, Elton John, David Bowie, the Rolling Stones, Jimi Hendrix and other rock gods during the era when they, like Wentzell, were just emerging. Some 50 years after Wentzell’s photos generated the magnetism that drew a following to Melody Maker, the magazine, the main attraction of Melody Makers, the movie, lies in the photos on display along with the tales of the discussions shared between the writers and musicians, who often stopped by the magazines office to do their interviews.

The film chronicles the rise and fall of the magazine which ushered in a style of rock ’n’ roll journalism that no longer exists. It was the mid-60s, the music landscape had and so did Melody Maker. Rock and folk music dominated. Excited fans had a desire to know the musicians they loved, like The Beatles, who inspired them. The publication began moving from stock photos to employing photographers who captured musicians in their element. With a fresh new look Melody Maker became the vanguard, approaching music and musicians as subjects for serious study rather than entertainment.

More importantly, Wentzell and the Melody Maker journalists nourished their relationships with the young rock stars, developing a trust between them. Wentzell was witness to many scenes of “bad behavior.” But not to spoil the relationships between musicians and writers who had total access, discretion was used. There were no makeup artists or publicists around. It was only a bunch of friends together when the writers, photographers and musicians hung out.

The film tells of the tragic day that the Rolling Stones learned that the band’s founder, Brian Jones, had drowned. The Stones were in a recording studio, and a journalist was, too, gathering information for a story. But instead of reporting the scoop, the writer was cornered by Keith Richards, who made him pledge secrecy until the band had informed Brian’s family.

Melody Maker educated its readers, featuring heretofore unknown artists the magazine considered vital rather than covering musicians their audience already knew. This practice helped the magazine break bands and garner credibility and respect throughout the industry. Newspapers had tremendous power at the time. And Melody Maker felt it had a role to play — to foster a deeper understanding of the artists and their work — not simply to promote music. Coles captured this period of rock ’n’ roll history in interviews with journalists, musicians and those who worked behind the scenes. Artists in the film include Ian Anderson of Jethro Tull, Eric Burdon of The Animals and members of Yes and Nazareth.

Melody Maker deputy editor Richard Williams described the magazine as a cause. Music defined who you were in the mid-’60s. Coalescing around the women’s movement, the environmental movement and Vietnam war protests, the youth created the zeitgeist and the belief in the power of music. The publication evolved into a bible for talent scouts and journalists. It became a cause for musicians who knew it was worth reading. In fact, writer Mick Watts wrote a profile on David Bowie when the pop star came to the office in a caftan and makeup and announced, “I’m gay and always have been, even when I was David Jones.” The headline read, “Oh You Pretty Thing,” quickly becoming a part of pop mythology to which Bowie later attributed his success.

The magazine served as inspiration for a young Jann Wenner’s first issue of the San Francisco–based Rolling Stone—published in November 1967. But ultimately, Wenner lacked the same vision the editorial staff of Melody Maker adhered to in standing by their ideals of discretion.

Wenner’s biographer Joe Hagen, a journalist who also worked at Rolling Stone in the ‘90s and the author of Sticky Fingers: The Life and Times of Jann Wenner and Rolling Stone Magazine wrote, “Wenner’s vision was “begged, borrowed, recycled, and stolen.” From the first issue, the editorial philosophy of an underground newspaper that took rock ’n’ roll seriously, the layout and even its subscriber base—was based on a previous publication, or somebody else’s original idea.”

Further, as the news of the time intensified, with the Kent State massacre, riots at the 1968 Democratic National Convention and escalation of the Vietnam War, rock ’n’ roll and the counterculture had a split and Wenner aligned with rock ’n’ roll.

During this time, the same shifts hit the British music culture. In Melody Maker’s case, an older staff — who had flourished at the dawn of rock counterculture — were not as into the new scene. A rival publication, New Musical Express, was ahead of the curve on the evolution into punk, covering the Ramones and Sex Pistols. Many writers didn’t understand it, nor did they care to. Eventually, a fragmented music market diminished the audience of the once highly demanded magazine.

The film is a visual treat with the added pleasure of amazing rock star stories, which you may come away from yearning for more of. Ultimately, it pays tribute to a style of music coverage not often seen, where everyone, artist, journalist and reader, played an equal and satisfying part.