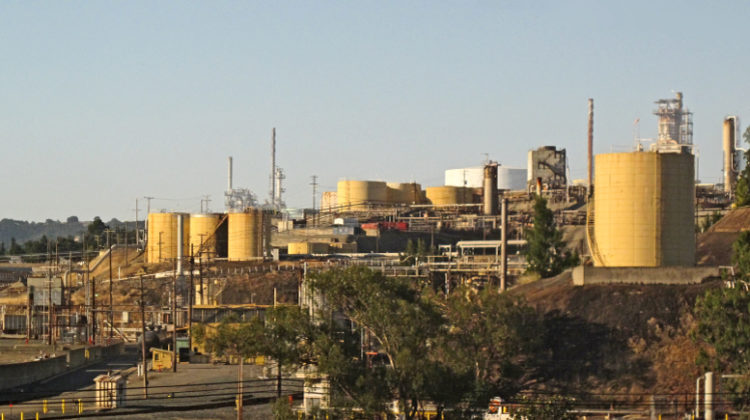 The Torrance Refining Co. and Valero Wilmington Refinery are the only California refineries using hydrofluoric acid  or HF alkylation. If accidentally released, HF would flash into a drifting ground-hugging toxic plume. A  plume such as this could have the destructive magnitude of the 1984 chemical release at Union Carbide plant in Bhopal, India, which  killed tens of thousands and  disabled hundreds of thousands more.

All other California refineries use liquid sulfuric acid for safety reasons despite the higher cost. Three viable affordable replacement options exist; hundreds of construction jobs would be created and no jobs lost.

Regional HF emergency preparedness would be orders of magnitude costlier and far less protective. Sheltering in place during a significant HF release could be a death sentence, and a quake can release HF while making sheltering impossible.

During a 1987 fire, a Torrance refinery supervisor implored arriving city firefighters to cool the HF tanks down “because the unit was within three minutes of exploding and killing everyone within three miles.” Residents demanded an HF ban. The City of Torrance sued Mobil, saying, “[HF] could cause a disaster of Bhopal-like proportions … extend[ing] to other areas of Los Angeles County … 100,000’s … could be killed and double that … seriously injured.” The Air Quality Management District adopted Rule 1410 in 1991.

In truth, MHF failed to meet safety promises, but still made the cut. “Safe” MHF is a disaster chemical, as shown by Environmental Protection Agency reports shielded from public scrutiny in the U.S. Marshall’s LA office.

Those reports admit an MHF release from one settler tank could create a drifting plume capable of killing or permanently disabling for 3.2-miles (Torrance) and 4.3-miles (Valero). Victims of that release could number 27,000-40,000.

That’s why MHF units bristle with emergency measures, unnecessary for sulfuric acid. Alas, as the AQMD Board explained in 1991, “engineering measures can… reduce the probability of an accidental [HF] release… [not] eliminate the possibility of a major accident.”

The “safe” MHF fiction nearly cost the lives of tens of thousands during Torrance and Philadelphia MHF refinery explosions in 2015 and 2019. The U.S. Chemical Safety Board revealed that Torrance’s 2015 explosion nearly caused a “catastrophic” MHF release.

Basic chemistry reveals MHF isn’t safe or even safer. MHF and HF are equivalent hazards. The HF toxic distances for EPA MHF scenarios are 16-17 miles. Five million live in the hazard zones defined by those distances. About 600,000 victims could be directly exposed to the plume.

In 2017, AQMD resurrected Proposed Rule 1410. For nearly three years, the board heard testimony from staff, industry consultants, and the LA County Health Department that MHF safety claims are unproven, MHF is 99 percent HF and barely different, we can’t medically cope with an MHF release, an earthquake could cause a release and simultaneously disable mitigation systems, and MHF must be phased out to protect the public.

But the AQMD Board, eight Democrats and five Republicans, unceremoniously terminated PR 1410 on September 6, 2019. Instead, the industry promised additional protective layers, an approach followed at the Bhopal plant that system safety experts deem ineffective.

This month a federal judge certified a class action lawsuit against the Torrance Refinery stemming from the 2015 explosion. Unfortunately, defined classes exclude millions threatened by MHF, mentioned in the initial brief.

The scientific and economic facts support a HF ban. Although corporate interests dominate deep blue California, a broad organized community fight could yet win this battle, especially in alliance with unions not bound by shortsighted corporate partnerships. Our lives could depend on it.