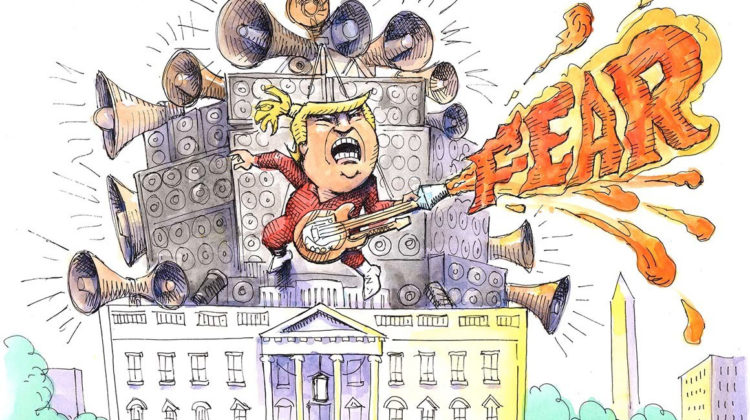 When government is led by the worst and incompetent

No, I didn’t invent the single word headline I’m using this week, and it isn’t a political term that you got wrong on your Advanced Placement government exam in high school. And it’s not the capital of Kakistan or even Kazakhstan. But it does resemble a communicable disease spread by social media affecting our society. Can you guess its meaning? If not, then you can always find it in the Webster’s and Oxford dictionaries.

Kakistocracy is a word that explains how Donald Trump can give the Presidential Medal of Freedom to economist Arthur Laffer for his theories on cutting taxes to produce more revenue for government. Most people remember it as “Reaganomics” and it has been criticized by most economists nationally and was proved a disaster as recently as 2012 in Kansas.  When Laffer was an economic adviser to Gov. Sam Brownback, he zeroed out state tax liability for about 330,000 of the top wage earners in the state, contending it would be a “shot of adrenaline into the heart of the Kansas economy.” Well, that didn’t work.

The state, which had previously had a budget surplus, experienced a budget deficit of about $200 million in 2012. Drastic cuts to state funding for education and infrastructure were implemented to close budget deficits and the Kansas economy tanked relative to neighboring states. Brownback’s tax overhaul was described in June 2017 as the “most aggressive experiment in conservative economic policy.” The drastic tax cuts had “threatened the viability of schools and infrastructure” in Kansas. The Kansas legislature eventually had to repeal the tax cut in June 2017, overriding Brownback’s veto.

This is the very same theory that is driving Republicans to support Trump’s new tax cuts that have raised the deficit to new heights. So much for fiscal conservatism. It is also these policies that brought us the Great Recession under Bush II even though conservatives try to pin the blame on President Barack Obama, who only took office after the effects of Bush’s tax cut  policies hit the nation.

According to the New York Times, Trump praised Laffer for policies that he said brought “greater opportunity for all Americans.” This only reinforces the core economic myth of “trickle down” prosperity that if you give more money to the wealthy that it will be spent to benefit the working class. What we have seen instead over the past few decades is that the wealthy only find new and better ways to hide their assets, leaving the working class with the burden. It also leads to the kinds of corruption that only having too much money can buy — think of Bernie Madoff, Jeffery Epstein or the “side-door” university admissions scandals. Money is power and having too much power corrupts.

I can’t even count the number of times this Laffer theory has been proved wrong, but clearly this is a Wizard of Oz moment for America, waiting for Dorothy to pull back the curtain to expose government made up of the worst and the incompetent, employed to help the rich get richer.

While attending the ersatz bronze Bukowski birthday party recently, I was reminded of a Charles Bukowski quote that seems as relevant today as when he wrote it years ago: “The problem with the world is that the intelligent people are full of doubts, while the stupid ones are full of confidence.”

This truism is an apt explanation of how stupid people rise to power at almost every level of governance and civic leadership. In this context, we label wrongheaded decisions and policies as “bold leadership” while thoughtful reflection and careful actions are labeled passive and weak. It is how tyrants rise to power in otherwise educated democracies.

America today is being lead by a group of Kakis-rats (if I may coin a word). A group of corrupt incompetents are setting an example for the even more ignorant to boldly push for increasingly racist and violently hateful policies. Doubt should not be a barrier to acting  intelligently and boldly. There’s no room for doubt if we are to resist the kakistocracy.

Kakistocracy (pronounced \kak-uh-STAH-kruh-see\) means “government by the worst people.” [And the incompetent or corrupt] It comes from the Greek root kakistos, which means “worst,” the superlative form of kakos, which means “bad.”