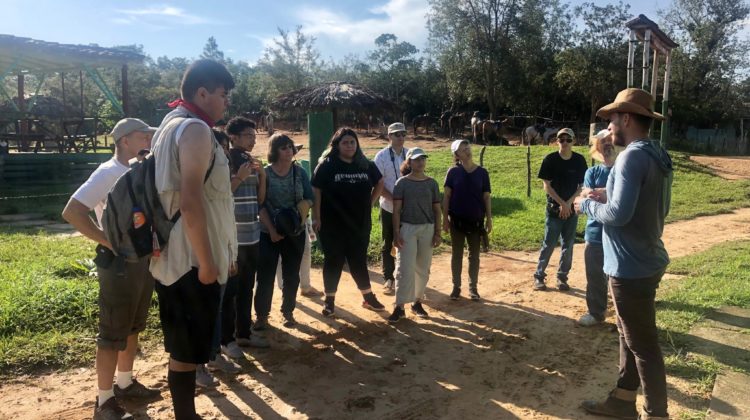 Havana, Cuba — A strong US youth delegation participated in the 12th International Environmental Conference held in Havana, Cuba July 1 – 5. The delegation of 19 youth and chaperones (overwhelmingly Latinx) presented in multiple workshops at the invitation of the University of Havana Marine Science Center, the Cuban National Aquarium, and the Environmental Youth of Cuba (Jóvenes Ambientalistas Cubanos). San Pedro youth of the LA Maritime Institute Youth Crew/Explore the Coast program participated.

The group presentations from US environmental organizations, were attended by over 175 participants from all parts of the world. Participants congratulated the LA MicroplasticsTeam for being so young and tackling the difficult problem of plastic pollution and seeing the immediacy of international collective action.

The conference, attended by 1400+ guests, including 250+ international guests from 43+ countries and was opened by Elsa Perez, Minister of Science, Technology and the Environment for the Cuban government. She presented shocking figures with a lead comment “The very existence of life on planet Earth is threatened.”

*800 million people have no access to fresh water, hundreds of millions without electricity

*one half of food produced is wasted not reaching people

*7.3 billion hectares of rain forest are destroyed annually, reduction of 15 to 6% of planet surface

92% of the world’s population do not breathe clean air

Perez added, “While the United States continues its aggression against Cuba, limiting people to people and academic exchange, continuing a 60-year long blockade, activation of the Helms Burton bill and countless efforts to destroy the Cuban people and our socialist economy and internationalism. These measures will not make us renounce our principles, our new constitution and our efforts to join internationally to stop global climate change.”

It was refreshing to see many of the panels being led by women, at least 70% of Cuba’s professional workforce are women.

The US delegation learned and discussed the many ways people world-wide are using their resources to fight climate change. Cuba, with limited resources because of the embargo and other natural and economic forces, is making new buildings more sustainable and environmentally conscious of the climate change impacts on them like hurricanes and sea level rising.

The California delegation arranged collaboration with many international delegations and individuals.

They also visited local cultural and scientific sites in Havana and toured the tobacco and coffee farms, while on horseback, in the region of Viñales and a cave exploration. (Cuba has more caves than any other country)

Cubans believe that in order to be a strong and actively participating citizens in society you must be educated. Even in their tight economy and ongoing trade sanctions Cuban literacy achievements are impressive. Cuba has a 99% literacy rate, compared to our 85%. When engaging with the locals many, if not all, wanted to learn more and were impressed with the work and reach the young students were undertaking.

Overall, it was wonderful to see so many science professionals from all over the world come together and share their ideas, successes and failures so we could all learn and grow from each other. Climate change is not something easy to tackle, everyone is affected in many different ways depending on our geography, and that is why we have to work together to figure out ways to fight it. One of the many things all the American delegates, and even international representatives, agreed on is that although small change is great and helpful it is not until we start holding big companies accountable and demand rigorous environmental governmental regulations that we will see considerable changes.

This delegation and scientific exchange and collaboration would not have been possible without the assistance of all who contributed financially to raise $5000 needed for the LA Microplastic students and other youth’s 10-day trip. We collectively thank you and hope that you will support us again in a couple of years when there is a combined international environmental and marine science conference in Havana. We shall be organizing a youth and adult delegation to attend and participate through workshops and invite you to join us.

The students and some of the delegation will have a report back, open to the community, Nov. 1.