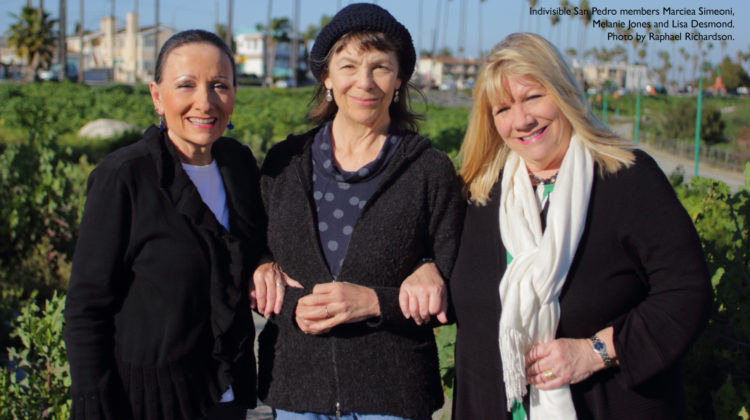 “Don’t get me wrong, this was not the first time I was pissed when my man lost an election,” said Lisa Desmond, who has attended weekly Indivisible San Pedro meetings with her sister, Marcia Simeoni, more-or-less faithfully since January 2017. “Only this time it was my woman [who lost] and she had been robbed right before our eyes by this hideous misogynistic, hate mongering con-man. Worse yet, people voted for this creature. ”

No, Desmond hasn’t gotten over it.

“At first, I was terrified,” she continued. “But by the time [Donald] Trump delivered his American Carnage inauguration speech, my sister and I were furious. When we found Indivisible, it was on.”

Fact is, through action after action, day by day, members of Indivisible San Pedro are remaking our democracy.

Desmond and Simeoni call themselves the Resister Sisters.

“After participating in 55 phone banks, countless letter writing campaigns and dozens of organized protests I can honestly say that we helped flip the U.S. House of Representatives and worked hard to replace [Vladimir] Putin’s best friend, Orange County Republican Dana Rohrabacher, with Harley Rouda in District 48. Talk about empowering. I feel super proud about that,” Simeoni said.

Like the Resister Sisters, Melanie Jones joined Indivisible San Pedro after Trump took office. However, she says her flame was sparked by the Women’s March in Washington, D.C., which she attended with one of her adult daughters.

“The day after the election, I felt like I had been hit by a truck — physically struck down,” Jones recalled. “People were kind of wandering around totally dazed asking each other, ‘What can we do?’ For me, the D.C. Women’s March was an amazing start. Everywhere I looked there were people protesting ­ and judging by all the laughter over the hilarious signs, they were having a great time doing it.” Jones recalls with a satisfied gleam in her eye.

When she got home, her husband, Peter, had gotten his hands on a copy of the original Indivisible Guide.

“We thought, ‘We can do this, it’s small, it’s local,” Jones said. “We made a few calls and the next week, 80 people showed up for the first meeting. At this point there are 30 or so of us who come every week. We keep it short — one hour max — and on point. We talk about what the people who supposedly represent us are doing and what we need to do about it.

“All in all, I think Trump has given us a great gift. He activated us and made us see the necessity of paying attention and being engaged.”

It’s a lesson the Resister Sisters vow never to forget.

“I used to think I was very politically involved,” Simeoni recalled with a chuckle. “I always voted, I listened to NPR, I kept up. But when that human turd got elected I realized that would never be enough for me again. I have a young employee who is a Dreamer and I promised her I would do everything within my power to protect her. It’s a promise I intend to keep.”

Dreamers are people brought to the United States illegally by their parents as children but are allowed to receive a renewable two-year period of deferred action from deportation and eligibility for a U.S. work permit under the Deferred Action for Childhood Arrivals Act.

Although Jones has done a lot of marching  since she first hit the streets in opposition to the Vietnam War, she shares the Resister Sisters’ alarm about the pace that  Trump is ratcheting up his assault on women.

“Let’s call it what it is: Trump’s fear-based war against women,” Jones said. “He fears our strengths: our intuition, our compassion, our ability to hang on despite the degradation heaped upon us. Frankly, he doesn’t scare me one bit. There is hope for us without a doubt. But hope is not enough. We’ve got to do the work. I am all in.”

Desmond has the same long-haul commitment.

“It’s the subjugation of women in this country that keeps me protesting,” she said. “I’ll be honest ­ I don’t see an end to it, either. I’ve been watching these old guys take away women’s reproductive health choices in other states for years. I can’t and I won’t let that happen here. I am an old woman; I don’t actually have any reproductive choices. But if women of my age don’t step up now, I fear young women will have no say over their own bodies in the future. I won’t let that happen.”

In addition to this fierce dedication to younger women, Desmond, Simeoni and Jones share something else in common with most  of the women in Indivisible San Pedro — they are over 50. Coincidence? Not according to the United States Census Bureau and the North American Menopause Society. They confirm there are more women older than 50 in America today than at any other point in history.

Do the math and throw in a few basic facts about women’s reproductive health (i.e., the average age that menopause shows up is 51) and it’s no mystery why postmenopausal women are a such a dominating force throughout the resistance movement.

Periods, politics and being pissed off. All in a woman’s day of work. Regardless of lifestyle or life, chicks are born to ride the menstrual cycle. Thanks in large measure to the trifecta of patriarchy, misogyny and ageism, getting off the dang thing was long seen as a regrettable if not an irreparable fall from grace. Which is total bullshit.

Dr. Christiane Northrup, author of Wisdom of Menopause, along with the dozens of postmenopausal women (and those who love them) who have made Indivisible San Pedro a force for years can tell you that menopause is a time of clarity, as well as an increased intolerance for injustice and inequality. Send in the Crones.

What You Should Know About Contacting Indivisible San Pedro