An Artist Finds What Was Lost ... 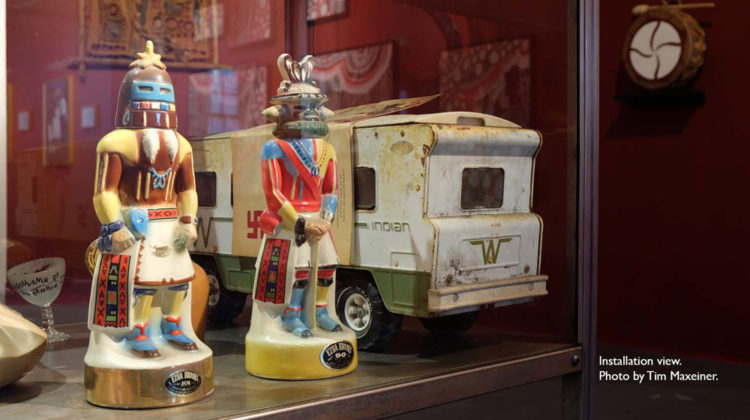 An Artist Finds What Was Lost Coming Into Being

Nearly everyone, at some point in their life has been told to “just be yourself.” But what does that mean? How does a Native American adoptee, searching for identity, while living in the spaces between European and Indigenous roots, find the answer to that question? This question of identity — asked so often — suggests that there could actually be a plausible answer.

Laurie Steelink has spent a lifetime chasing down the answer to the great universal question. The result of this search (so far) is presented in an exhibition Angels Gate Cultural Center called Coming Into Being; Gathering the Elder in Me, opening Oct. 13. The show is a type of anthropological presentation that combines photographs, paintings, drawings, and video, with ephemera, artworks and photographs from her family’s collection.

When you feel like an outsider your search for identity takes on a greater sense of uncertainty.

“It was a difficult time being raised in Arizona in terms of identity and being comfortable with who I was,” Steelink said. “When I was a teenager wanting to assimilate, the culture was not welcoming. It wasn’t until I was a young adult that I wanted to identify more with my Native American ancestry.” On the incongruous date of Thanksgiving 1960, Steelink was born to a young woman who was a member of Arizona’s Akimel O’otham Tribe. Steelink was given up for adoption by her birth mother. At six-months old, she became the child of Jean and Cornelius Steelink, Euro-Americans, and staunch liberals who came from a long line of revolutionaries, Wobblies, civil rights activists, scientists and artists.

The Steelinks had little doubt of who they were. The patriarch of Laurie’s adopted family, grandfather Nicolaas Steelink, was a Dutch American labor activist, ardent atheist and an anarchist. During his time as a member of the Industrial Workers of the World, he was convicted of criminal syndicalism (essentially a charge for union organizing), and sentenced in 1920 to two years in San Quentin prison. Her adopted grandmother was a Russian immigrant fleeing the revolution and a committed humanist. She later became one of the earliest women to graduate from the University of Southern California School of Pharmacy.

Her adopted mother and father met and fell in love on a picket line protesting the atom bomb. Her parents were founders of the Arizona chapter of the ACLU, when no chapters existed in the state. Both parents were pacifists with academic careers, who devoted their lives to humanitarian causes.

Raised in Tucson  under such fortunate circumstances Steelink was blessed with a family structure that clearly provided a direction in her life, if not the answer to her question of identity. Steelink was always aware of her Native American ancestry, and coming of age in a mixed-race family, in an academic, middle class environment, left her grappling with these issues that she’s finally beginning to resolve. At the age of forty, Steelink located and met her birth mother and Akimel O’otham relatives, and has become an active member of Southern California’s indigenous community

Through this search she was able to find the answer that most adoptees carry throughout their lives. Why was I given up for adoption? Her birth mother lived in poverty and struggled to survive on the reservation. Upon meeting her birth family, she discovered that their lives had been brutal and harsh. Her romanticized fantasy of Native American life was lost, but gave her a deep gratitude for the good fortune of being brought into the Steelink family. She went on to get a bachelor’s of fine arts from the San Francisco Art Institute and a master’s degree in fine arts from Rutgers University. She served as director of Track 16 Gallery in Santa Monica and eventually moved to San Pedro.

This is where the story began to come together.

Pushed out of Santa Monica by astronomical rents, Steelink came to San Pedro and founded Cornelius Projects, a home for art, music and poetry. She met punk rock and jazz musician Joe Baiza, who reconnected her with the revolutionary message of the outsider. She met street racers and low riders, and invited them to tell their stories at Cornelius Projects. She met a whole community of San Pedro artists and organized exhibitions in her gallery recounting the history of art and music in her new hometown. She also met people who began to ask her about her Native American roots and spoke to her about something called the Gathering of Elders up on the hill at Angels Gate.

In 2016, the entire nation, and much of the world, was caught up in the dramatic struggle to stop the Dakota Access Pipeline which crosses tribal lands in North Dakota. At this time, Steelink had begun to meet local Native Americans and she was approached by tribal activist George Funmaker of Red Earth Defense, to use her gallery space to host a fundraiser for Standing Rock after the original planned location cancelled. She suddenly found herself, in her studio, surrounded by 60 indigenous activists joining an historical movement. The lost half of her identity had metaphorically found her.

She hosted the successful fundraiser, supported by art donations from some of San Pedro’s most talented artists. The fundraiser featured presentations by indigenous water protectors and a film screening.

Since that time, Steelink has been actively involved with newly returned Gathering of Elders. Steelink’s highly personal exhibition, Coming Into Being; Gathering the Elder in Me, coincided with the 14th Many Winters Gathering of Elders, an indigenous cultural event that took place at Angels Gate earlier this month. It incorporated a second curatorial project Steelink organized, In a Good Way, which surveys previous Gatherings between 1992 and 2017.  In a Good Way brings together photographs, printed matter and a new series of portraits of Southern California indigenous peoples by photographer  Tom Gugler.