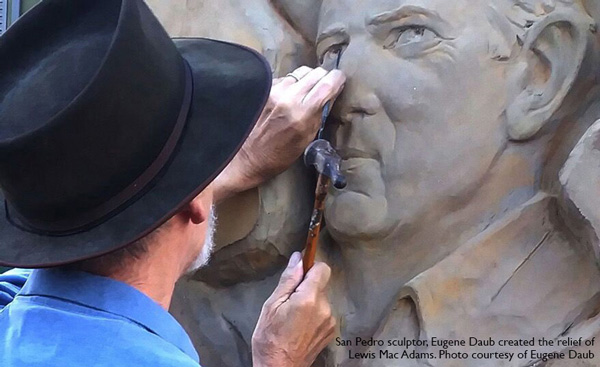 The Los Angeles River, infamously tamed and confined in concrete is coming back to life, one small step at a time. The improbable revitalization began thanks to poet, artist and crusader Lewis MacAdams.

This month MacAdams’ extraordinary accomplishments were recognized with a 7-foot statue created by sculptor Eugene Daub titled, Poetry and Politics. On the monument are MacAdams’ words: “If it’s not impossible, I’m not interested.”

The monument was installed in the Frogtown neighborhood of Los Angeles, officially known as Elysian Valley. The river runs through the small community bordered by 110 Freeway to the south, the 2 Freeway to the north, Interstate 5 to the west and the Los Angeles River to the east.

MacAdams, the founder of the non-profit Friends of the LA River, also known as FoLAR, points to the frog as the symbol of the river. Frogtown’s name comes from the days when red-legged frogs used to climb out of the river to lay their eggs. On warm summer evenings croaking could be heard throughout the river valley. Red crawfish used to live in that river and the last steelhead trout was caught in 1948. MacAdams may never bring back the steelhead, but his goal is to repopulate the river with the sound of frogs.

The genesis of MacAdam’s activism dates back to the 1980s when he moved here from San Francisco and stumbled across the concrete ribbon called the LA River. The poet was invited to participate in a performance festival at the Museum of Contemporary Art, called Angels Flight. As part of his performance he and two friends grabbed their wire cutters, cut a hole in the surrounding chain link fence that had defined the river as an inhospitable drainage ditch and performed something of a ceremonial unleashing of the river. He called his piece, Friends of the LA River, and a movement was born. The impossible task was to return one of the world’s most heavily industrialized rivers to nature.

Honoring the campaign to free the river, Daub moved away from his traditional bronze medium and created a statue from concrete. This is the first time he worked with that material. The statue depicts MacAdams over a relief of river flora and fauna including frogs, herons and fish. Marsh Park, the location for the installation, was renamed MacAdams Park in his honor.

The park itself is a triumph. The goal was always to ‘crack the concrete’ and return the river to the people, for recreation, environmental education and as a community space. In 2014, FoLAR built the first visitor center for the river. Affectionately referred to as the Frog Spot, it sits on the bank of the river overlooking heron’s resting on rocks and trees growing on the banks. Now, the park provides a verdant location for newlyweds to exchange vows, hipsters to knock back a beer while enjoying live music, as well as for families to take pleasure in a simple picnic. Each Saturday they host live music and recruit volunteers for their grassroots advocacy.

To be part of MacAdams visionary project and have an up-close experience with the river, volunteer at folar.org.