An Infectious Stupidity or Con... 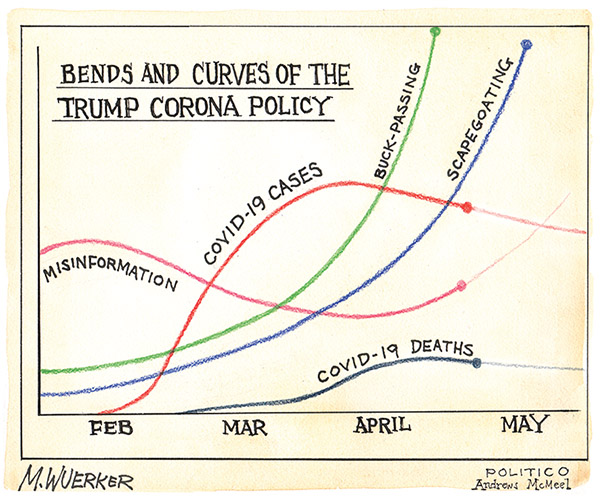 An Infectious Stupidity or Conspiracy of Idiots

There’s not a whole lot you can do with a man who doesn’t listen or learn from his mistakes and one who continues talking from a point of ignorance during a time of crisis against overwhelming evidence.  Such is this president.

His now daily briefings have become even more irrational than ever and his changing positions and blame-gaming are enough to make your head spin — if you were to take what he says seriously.  But how can one not?  Oh what I would do for just one opportunity to be a part of the Washington Press Corp and show them just how to ask just the right questions and how not to back down from a bully.

Allen: “Mr. Trump, you certainly have now made America great again. In fact, we’re number one in the entire world.”

Trump grins and likes how this sounds initially.

Allen: “We now have the highest rate of COVID-19 infections in the entire world, with more deaths than Italy and China and yet, you and your advisors knew about the possibility of this epidemic weeks, maybe even months, before the rest of us did and you did nothing to prepare for it.  Congratulations! Is that how you intended to make America great again?”

Trump: “Well, that’s a nasty question, from a nasty reporter of fake news.”

Allen: “Nasty questions are reserved for particularly nasty idiots who believe they can lie with impunity and get away with it in public.”

The president then explodes in unrestrained blather, he loses his cool on national TV, which only further proves my point. He then storms off the podium ending the press conference early.

The Secret Service swoops in and escorts me out of the White House briefing room,  with the advice never to return.

The mainstream media are stunned at how a reporter from a news organization they’ve never heard of had the audacity to stand up to the ridicule of this president. When asked, I respond, “This is something all of you should have done long ago only you all have something to lose by speaking truth to a liar, I don’t!”

For weeks afterwards I become aware that all my movements are being surveilled by agents in dark suits in cars with government plates. I assume they are tapping my phone, email and scrutinizing our reporting. I’m cautiously amused at having some new readers.

It’ll soon be over in November if the election isn’t stolen again and I can only wish that the blind hand of this infection visits the White House in a manner commensurate to the pain that they have inflicted upon the nation.

What happens when people who don’t believe in government govern

Donald Trump is a symptom of an infection worse than the coronavirus. This infection has been spreading since before President Ronald Reagan said “Government is not the solution to our problem … government is the problem,” in his first inaugural speech. That comment seemed to just roll off his tongue like a line from one of his old B-movies, delivered with smooth confidence as if it were a common man’s truth. Sure, no one likes a government that interferes with our liberties up until there’s an epidemic that kills you or your family.

The hypocrisy of this common belief was first exposed in how Reagan handled the response to the AIDS virus in the early 1980s. Though the Centers for Disease Control discovered all major routes of disease transmission, including that female partners of AIDS-positive men could be infected, in 1983, the public considered AIDS a gay disease. It was even called the “gay plague” for many years after. And because of this designation and because of Reagan’s religiously anti-homosexual politics, his administration did nothing to prevent the spread of the disease until it was too late to stop it. The best read on this era is a 1987 book, And the Band Played On: Politics, People and the AIDS Epidemic by journalist Randy Shilts. The title is a reference to the musicians on the Titanic, who reputedly kept playing as the ship sank. This is perhaps a bit like the opera singers in Italy singing from their balconies as the COVID-19 pandemic sweeps across their land. Then, as now, America was woefully unprepared to deal with the HIV/AIDS epidemic. Yet, America has ever since the 1940s been researching biochemical warfare agents and defenses to them. And there are a few dozen agencies that have increasingly focused on the science of protecting this country from both biochemical weapons attacks and epidemics. The National Defense Authorization Act of 2016 required high-level officials across the federal government to create a national biodefense strategy together. As a result, in 2018 the National Biodefense Strategy was released by none other than President Donald J. Trump. And yet, this very same administration that has had every opportunity to prepare a response to something like the COVID-19 outbreak but reacts with all the surety of a Keystone Cops episode, all the while deflecting any responsibility for the house burning down. Former Vice President Joe Biden perhaps said it best last January. “The possibility of a pandemic is a challenge Donald Trump is unqualified to handle as president. I remember how Trump sought to stoke fear and stigma during the 2014 Ebola epidemic. He called President Barack Obama a “dope” and “incompetent” and railed against the evidence-based response our administration put in place — which quelled the crisis and saved hundreds of thousands of lives — in favor of reactionary travel bans that would only have made things worse. He advocated abandoning exposed and infected American citizens rather than bringing them home for treatment.”

That is the difference between those who believe government has a role to protect and serve and those who think government should be strangled in the bathwater. Suddenly a national health care plan isn’t so unimaginable anymore.