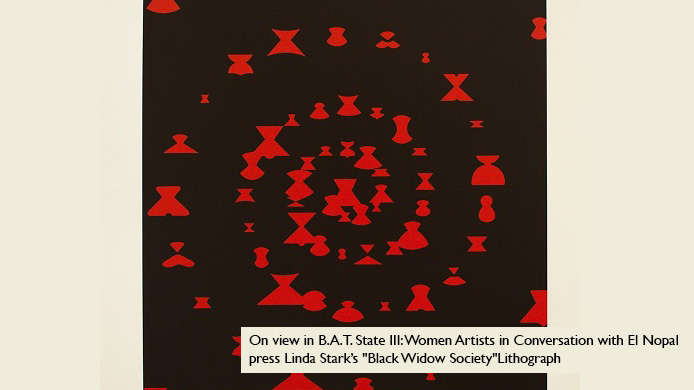 B.A.T. State III, Expands Cultural Relationships Through the Past

This past September, artists Anita Bunn and Francesco X. Siqueiros curated the B.A.T. State III: Women Artists in Conversation with El Nopal Press. El Nopal Press is a fine arts press founded by Siqueiros and is distinguished by its focus on the work of artists who explore border issues and cultural relationships between Mexico and the United States.

The catalyst that drove El Nopal was Sisqueieros intent to internationalize the conversation of the Chicano esthetic. It began with localizing the conversation in the American Southwest with Mexico City and addressing issues of identity. Siqueiros noted it may be a marginalized conversation, but it’s one that has expanded through that initial gesture.

“The stretch of conversations of women artists is quite vast in cultural perspectives,” Siqueiros said at the B.A.T. State III opening Sept. 8. “Now it’s gone beyond that by bringing in women artists from concrete abstraction.”

Three generations of artists have made a presence in the exhibition, bringing a body of prints by 37 women artists produced over a span of 30 years, featuring lithographs, relief prints, and monoprints. Bon à Tirer or “good to go,” in printmaking, refers to the final trial proof that an artist approves before the master printer begins production. The artist gives approval by initialing the proof with “B.A.T.” and signing it.

Siqueiros cited  El Nopal artists like Shirley Jaffe, whose work created movements that aren’t repetitive but function together as a whole. Her black and white prints on view embody declarative energy. And Linda Stark’s Black Widow Society, nocturnal portraits of black widows. The hourglass symbol on the spiders belly resembles a woman in a red dress. The works reference the cult of the black widow or femme fatale architype in a star like spiral of widow forms signifying its omnipresence in the Southwest.

Many artists have been drawn to work with Siqueiros because of his technical expertise, collaborative spirit and encouragement of experimentation. One of those artists is Bunn, who in 2013 proposed the first B.A.T., which she curated at LA’s Offramp Gallery. B.A.T. III, highlights themes of activism and examines the influences of printmaking through the cultural and geographic border between California and Mexico. The works relate to the idea of the border rather than its physical manifestation, economic and social barrier, or penetrable boundary.

Yreina D. Cervántez’s Nepantla prints [roughly translated as in the middle or an in-between state] represent how Native Americans traversed colonization — at least on the surface and adopted themselves into a new way of being in two worlds. Nepantla eludes to ideas of negotiating and living in a world but not being quite accepted. Through collage form the prints contrasts the history  of Native American tribes and newspaper stories of the farm worker protests of the 1994 ballot initiative, Prop. 187 — an attempt to establish citizenship screenings and prevent undocumented immigrants from using non-emergency health care, public education and other services in California.

Cervántez comes from classic Chicano iconography tradition of the 1960s and 70s, which at that time Siqueiros noted, was about constructing identity. Cervántez was transitional because she worked with writers and women poets and they were extending the conversation of the classical period, going beyond Chicano identity.

Siqueiros compared this expansion with exhibitions like Rita Gonzales’ 2008 Phantom Sightings Beyond Chicano Arts at the Los Angeles County Museum of Art. Phantom explored experimentation within the Chicano art movement, LACMA asserted at the time, with artists oriented less toward painting and critical statements than toward conceptual art performance, film and media based art… The Los Angeles Times noted the show also stirred debate beginning with its title, Art After the Chicano Movement, “suggesting a generational and aesthetic break with Chicano artists who emerged during the civil rights struggle. Its emphasis [was] on younger artists who don’t wear their ethnicities on their canvases, Phantom Sightings [seemed] to be inaugurate a “post-ethnic” Chicano era.”

Cervántez exemplifies this aesthetic useing iconography of the past in order to update symbols and create a modern feminist perspective. Her female figures are often described as inspiring representations of female agency. Cervantez’s art exemplifies that Chicanos are already in their own ancestral homelands and are actually not immigrants to the United States.

In Drug Lord and Patron and Nation and Futbol, artist Carolyn Castaño produced 37 lithograph/monotype prints of both a Columbian drug lord and a soccer/fútbol star. B.A.T. State III exhibits four of these prints, which represent the mythology of figures in Colombia. One of the figures is Pablo Escobar, drug lord and leader of the Medellin Cartel. The other is soccer/fútbol athlete Andrés Escobar who was allegedly killed by the cartel after scoring a goal for the opposing team accidentally during the 1994 World Cup. Both men were from Medellin, Colombia. Escobar loved soccer and funded many of the games and training for his local team Atlético Nacional, which Andres came out of and benefited from. 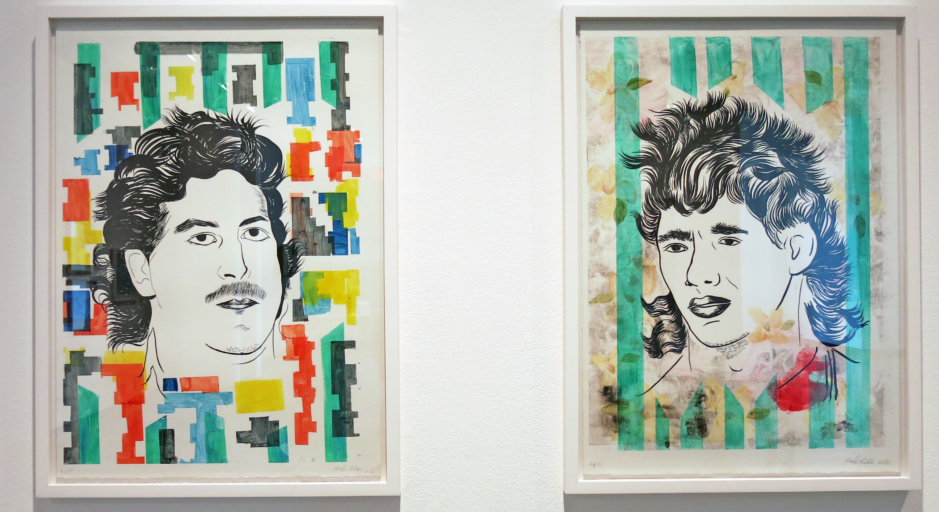 Drug Lord and Patron and Nation and Futbol, by Carolyn Castaño

It’s a comparison and contrast conveying unique backgrounds on each of the four prints featured. Drug Lord and Patron has a variety of imagery and color conveying blood, death, forms, cactus and flowers showcasing vibrant symbolism of life and death. Nation and Fútbol depicts green and white stripes representing the Atletico Nacional’s team colors. In some, Pablo is bleeding or decapitated — connecting to the violence of the narco wars.

In others, colorful modernist shapes make the prints become almost pop-like posters. They become or have become local popstars for people who revere soccer or Pablo’s fame but they’re detached from who they were.

Siqueiros said that monotypes are the orthodox of lithographs but with the perspective of Castaño’s prints, they would be cost prohibitive. Siqueiros acquired a German Mainlander proofing press for this set of 37 prints — used for hardcopy proofing or for obtaining bright colors using pigmented inks. This proved to push boundaries and informed the quality of Siqueiros’s press beyond orthodoxy. Most print shops do not have this press which has much more control and possibility. It demonstrates the collaborative spirit El Nopal Press engages in.

On Oct. 13, Siqueiros will speak and lead a printmaking workshop with Anita Bunn which includes the artist talk with Yreina D. Cervántez.

On Oct. 16, Siqueiros will lead a panel discussion to further explain the vast connections El Nopal has brought forward through B.A.T. State III.

“It’s been 30 years,” Siqueiros said. “I’m only there to provoke something but [the result] can go well beyond the original intention. There are so many connecting points.”

The exhibit runs through Nov. 14.