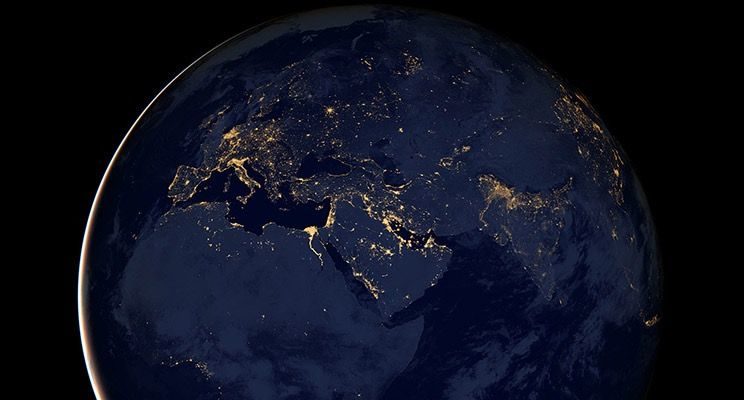 It May Be Key To Looming Climate Crisis Survival

In 1965, President Lyndon B. Johnson was warned about the dangers of climate change as part of a report, “Restoring the Quality of Our Environment.” By 2000, it warned, there would be 25 percent more carbon dioxide in the atmosphere. “This will modify the heat balance of the atmosphere to such an extent that marked changes in climate, not controllable through local or even national efforts, could occur.”

Had we begun gradual but sustained action then, we could have largely avoided the climate change crisis we’re now in the midst of, which is only going to get dramatically worse, with sea-level rise of 45 feet or more, and destabilizing mass migrations across the globe. Even starting in 1988, when NASA scientist James Hansen warned Congress that climate change had arrived, we could have largely transitioned to renewable energy by now.

That year, George H.W. Bush, running for President, responded by pledging to use the “White House effect” to battle the “greenhouse effect.”  But he ended up scuttling firm timetables for curbing carbon dioxide emissions as part of the international agreement which has framed global action ever since.

It was hardly surprising, given his oilfield roots, and the key role the fossil fuel industry has played in preventing action. The main weapon the industry has deployed is the “uncertainty” narrative—the same narrative that used to promote excessive reactions in other contexts—the need for military spending or action, for example — as with Dick Cheney’s “One Percent Doctrine,” that “If there’s a 1 percent chance that Pakistani scientists are helping al-Qaeda build or develop a nuclear weapon, we have to treat it as a certainty in terms of our response.”

But with climate change, the story was exactly the opposite: Uncertainty, we were told, meant we shouldn’t do anything at all.

Uncertainty Means More Cause To Worry

That’s 100 percent wrong, scientists now say. Uncertainty means risks are almost certainly even greater than we suppose. What’s more, understanding uncertainty can help guide sound action and help avoid worst-case scenarios. In addition potentially debilitating effects of uncertainty only increase the significance and importance of listening to and empowering the growing youth climate justice movement.  In many ways, harnessing uncertainty may be indispensable in facing a future that’s more uncertain than we can possibly imagine. 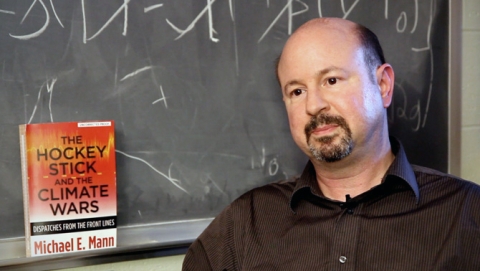 No one knows the climate wars better than leading climate scientist Michael Mann, best known for his 1998 “Hockey Stick” paper, and the controversies that followed. That paper used multiple proxies to conclude that recent warming was unprecedented in at 600 years. “This year in @Nature, scientists concluded it’s unprecedented in at least eleven millennia,” he tweeted last December. “Guess we were wrong…”

“The critics like to say the climate models can’t be trusted; Their predictions are alarmist, they are an exaggeration,” Mann told Random Lengths. “If you actually look at what the models have predicted and what is actually happening, we are losing sea ice in the Arctic faster than what the climate models predicted.”

In fact, the latest research shows the Arctic is warming twice as fast as the global average over a period of decades.

“That means that the polar amplification is greater and happening more quickly than the models had predicted, and so the increase in extreme weather events tied into that are a nasty surprise,” Mann said. “It is something that we would not have predicted based on the models at the time, but we see it playing out. And retrospectively we can say, ‘Oh yes we now see how this is related to changes in the climate that are human caused,’ but we could not have predicted beforehand,” he said. “A cautionary tale.”

What’s more, “There is this intrinsic conservativeness in the world of science,” Mann said. “Scientists don’t want to be alarmist, they don’t want to be coming out in the head of the pack, and they feel safe being in the middle, especially when there are bad actors looking to discredit us and malign us and to vilify us.” This can even influence assumptions in modeling “when it comes to uncertain aspects,” he said.

Uncertainty Gets A Closer Look

In 2014, Stephan Lewandowsky co-authored two important papers about climate uncertainty, which I covered for Salon, and re-contacted him to discuss.

“Basically, we provided a quantitative analysis of the fairly obvious fact that uncertainty means things could be worse than anticipated,” Lewandowsky told Random Lengths. “Potential climate surprises are more likely to be calamitous than benign, because the probability of adverse climate events, such as flooding resulting from sea level rise, increases with increasing uncertainty, all other factors being equal. In consequence, adaptation costs go up if we want to keep risks constant.”

For example, he said, “A sea wall that might cost $1,000,000 if we knew the extent of sea level rise by 2050 with great precision, may cost $2,000,000 if the same expected sea level rise is known with lesser precision.” Chalk it up to basic math. “This result follows from basic extreme-value statistics and is nearly inescapable,” he said. “So uncertainty is no one’s friend and it should provide an impetus for mitigation rather than a nudge towards inaction.”

Those papers helped spark a wider interest and the next year he co-edited an issue of the journal Philosophical Transactions devoted to the relationship between scientific uncertainty about climate change and knowledge.

“Appeals to uncertainty are so pervasive in political and lobbying circles that they have attracted scholarly attention under the name ‘scientific certainty argumentation methods’, or ‘SCAMs’ for short,” Lewandowky and his co-editors wrote in their introduction. “SCAMs have been identified as contributing to the delay of regulatory action on many health and environmental problems, including climate change.”

That same year, environmental data scientist Justin Farrell published the first of two studies of the network structure and influence of the climate change counter-movement, based on large-scale text-analysis. While climate denialists have frequently floated baseless, even illogical conspiracy theories about climate scientists deliberately faking results and misleading the public, Farrell’s work provided solid proof that denialist themselves operated that way. The network of contrarian institutions and individuals grew dramatically larger and more tightly organized from 1980 to 2013, even as evidence of global warming grew stronger and more dire.

In his second paper, Farrell found that “organizations with corporate funding [either Exxon-Mobile or the Koch family foundation] were more likely to have written and disseminated texts meant to polarize the climate change issue.” In addition, “Corporate funding influences the actual thematic content of these polarization efforts, and the discursive prevalence of that thematic content over time.”

Thus, just as uncertainty has the opposite significance of what’s attributed to it—making action more imperative, not less — so, too, those promoting the false message are the opposite of what they pretend to be: the conspirators pushing a special interest agenda, accusing those they attack of their very own misdeeds.

Uncertainty As Source of Knowledge

In contrast, Lewandowsky and his Philosophical Transactions co-editors went on to say that in light of his earlier work, “Uncertainty can therefore be a source of actionable knowledge rather than an indicator of ignorance.”

For example, one paper examined state formation and decline in the Mexican and Andean highlands over two millennia, the co-editors explained:

“They conclude that the formation and consolidation of states and empires are facilitated during stable climatic regimes and disrupted by highly volatile climatic conditions. As they note, ‘under conditions of extreme uncertainty it is impossible for people to evaluate the costs and benefits of one strategy or another’, thereby preventing adaptation to changing conditions and leading to ‘abrupt changes or tipping points in preindustrial states’. Climatic uncertainty, in other words, has demonstrably contributed to the collapse of past complex societies.”

What’s more, it would be mistaken to think we’re much more sophisticated and therefore immune to the lessons of these historical examples, since general principles are involved:

“Complex systems, such as the climate system or global civilization, are known to be prone to surprises, such as unexpectedly large effects of small changes to seemingly insignificant variables on system behaviour. The potential for future surprise is particularly large in systems in which surprises have arisen in the past.

And they apply to us today:

Both the climate system and civilizations are complex systems that are known for their history of surprises. Finally, the risk of surprises increases if complex systems are driven  outside the conditions in which they have been operating in the past. As Bentley & O’Brien showed, current civilizations are changing more rapidly than ever before. Current climate change is putting the Earth system outside the parameters of the last two millennia. Two mutually interacting complex systems are driven beyond their traditional operating parameters.

All this means we can’t ignore the risk of “unknown unknowns,” a term Donald Rumsfeld used to scaremonger in the aftermath of 9/11, but which are far more likely to exist in the realm of climate change, as this analysis indicates.

In February, the Nation published an article by historian Alfred McCoy, “The End of Our World Order Is Imminent,” in which he argued that climate change would not simply threaten to destabilize the American empire — one of more than 200 in world history — but also the “far more deeply rooted” world order around it, one of just three since the Bubonic Plague in the 1300s. “World orders are woven into the fabric of civilization itself,” McCoy wrote, making it almost impossible to conceive what its end might entail.

Another aspect of uncertainty is how it impacts us psychologically, thus affecting our cognitive capacity for problem-solving. One paper “showed that under conditions of uncertainty, people are biased against creativity and prefer mundane functionality instead… It follows that the uncertainty that inevitably arises in times of crises may therefore stimulate a bias against creativity that in turn may militate against finding a solution to the crisis. When creativity is most needed, it might be thwarted by people’s response to uncertainty.”

Another paper concluded “that uncertainty tends to destabilize cooperation,” the co-editors wrote:

“There is now a considerable body of evidence to suggest that uncertainty is the enemy of cooperation.

“Finally, perhaps the gravest potential consequence of uncertainty relates to its potential to trigger, enable or prolong violent conflict.”

It’s important to note that these last two uncertainty effects are in addition to the direct impacts of climate change on increasing violence, which have been noted episodically (as in contributing to the Syrian Civil War) and systemically. A 2013 study of the post-1950 era, “Quantifying the Influence of Climate on Human Conflict,” found “both substantial and highly statistically significant” increases in the frequency of interpersonal violence and intergroup conflict as a result of climate change “toward warmer temperatures or more extreme rainfall.”

This trio of negative cognitive impacts—though distressing on its face—serve to underscore just how invaluable the rapidly-growing youth climate justice movement can be.

Youth are inherently more experimental and creative as a whole at a biological level. Cooperation and resistance to violence may be biologically more ambivalent, but in the current moment the existing youth activist movement is far more cooperative and universalist in outlook than anything in the adult realm, except the climate science community itself, which has already expressed its support for them.

“There is little doubt that the rhetorically violent populism that Trump pursues will eventually lead to actual violence (arguably it already has),” Lewandosky said. “It follows that the universalist approach of the youth climate strike is a good antidote to that divisive rhetoric.”