Don Arbor Carries on the Tradi... 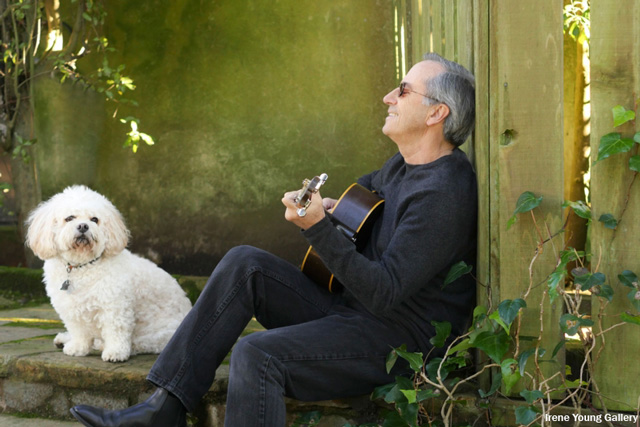 Don Arbor Carries on the Tradition of Protest Music

Turbulent times inspire powerful music. We are in those times. Artists of every kind can make powerful protest music. Yet, often because of the immeasurable and varied ways we now consume music, coupled with our demanding lifestyles, protest music is not always front and center.

I happened upon one such video by Bay Area singer songwriter, Don Arbor. His song, Everyone Comes From Somewhere is a striking message to counter anti-immigrant sentiment. Arbor’s voice is mellow and inflected with  folk stylings, but the power is in the message.

Everyone Comes From Somewhere, is a welcome song for immigrants that is extremely relevant today. Donald Trump announced he was ending the Deferred Action for Childhood Arrivals program on March 5 unless the U.S. Congress found a solution for about 800,000 dreamers brought here as small children by their parents. The Dreamers still await a congressional decision on their fate to remain living and working in the only country they have known.

Arbor is an award-winning video artist. He has a particular talent for protest music, although his repertoire encompasses much more. His music has been compared to such varied performers as Glenn Frey, George Harrison, Steely Dan, and Green Day.

In his video, with assistance from Bay Area filmmakers Charles Koppelman and Irene Young, Arbor weaves images that portray our immigrant past and present. In his words, he came of age at a time when music with a message was very popular.

“Like Bob Dylan’s Blowin’ in the Wind, A Hard Rain’s a-Gonna Fall and Masters of War,” Arbor said. “Those Dylan songs that had a message.”

Arbor’s initial thought to write the song struck from a conversation with his mother’s caregiver, Karen, an immigrant from the Caribbean.

“We talked about how badly she felt, given what she was hearing, so hostile toward immigrants,” Arbor said. “When she said that, I agreed and I just blurted out, ‘Everyone comes from somewhere.’ As if to say, ‘What makes you think you’re better because of where you come from?’ Her response to that was, “Yeah, everyone comes from somewhere. You should write a song about that.”

He started writing that afternoon. It took more than a year and a half to make it into the song that it became.

“I wound up with a file of so many ideas that it would almost have been a book or a short story,” Arbor said.

Arbor has two other poignant videos. One is called, If I Had a Son, He’d Look Like Trayvon, after the 17-year-old who was shot and killed by neighborhood watch volunteer George Zimmerman in February 2012. The other is Salam Pax, a peace anthem written in the words of an Iraqi blogger who wrote during the invasion of Iraq in 2003.

Arbor discussed his motivation to keep speaking out, if he becomes discouraged and his remedy for discouragement. He called himself hopeful but he always pays attention to what’s going on around him.

Arbor’s Trayvon Martin song was triggered by hearing President Barack Obama observe, “If I had a son, he’d look like Trayvon.”

“That just struck me as such a human empathic thing for our leader to say,” Arbor said. “And you could see the emotion in his face. You could hear it in his voice.”

The video makes a statement about the stand-your-ground laws in Florida, both in imagery (a car trunk full of guns for sale for $2) and words. It shows how the law allowed a neighborhood watch volunteer to disregard directions by the police to do nothing and wait for them to arrive and then persuade  a jury to acquit him of the second-degree murder and manslaughter of an unarmed teenager.

“I would hope that we’ve turned a corner and that the activism coming from Florida catches on like a wildfire that can’t be stopped,”Arbor said.

Do I ever get discouraged? Yeah. There’s a song I wrote on that very subject called Hope Is Hard to Kill. The idea behind that is we’ve been through a lot of rough times in the past and that we managed to get through them. We get through them by fighting back, by maintaining our hope and our activism.”

Arbor is also open to the wounds that our present and our history have inflicted. It’s a constant tension between being a feeling person and resisting the urge to be defeatist. Song writing is a big help to him.

“One of the reasons I do it is, there’s strength and power in communication and songs communicate,” Arbor said.

Speaking to current protest music, Arbor mentions his two sons who are 21 and 18 years old and big fans of Kendrick Lamar. Through their influence he’s also become a big fan.

“My first impression of Kendrick Lamar was his … incendiary performance at the 2016 Grammys, when he did Blacker the Berry and Alright, with cuffs and band members behind bars, followed by a bonfire,” Arbor said. “That took a lot of courage, not to mention a great performance. More recently — like most everybody else — I think Humble is a great track, with a surprising message. He’s really got a great boldness and vision about political and social issues that I appreciate. It’s refreshing to hear somebody have that courage to speak out.”

Songs with  messages were powerful to Arbor as a teenager, and inspired him. “I feel like I’m trying to carry on a tradition, where you can have a message in a song, speak your truth and people get some support for their own views. Music can build community that way.”