An Ocean’s Worth of Genetic ... 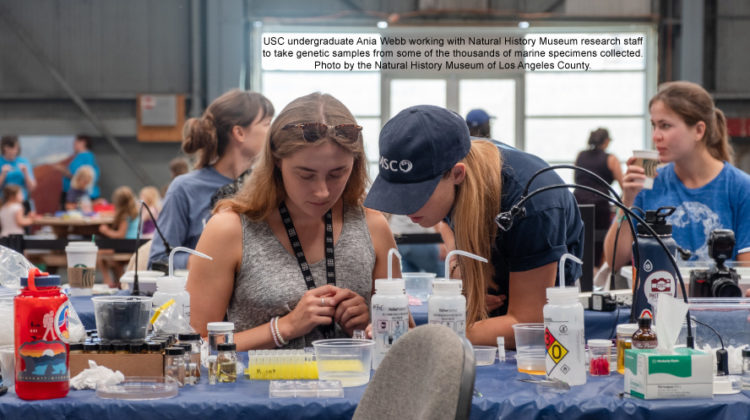 An Ocean’s Worth of Genetic Diversity in a Cup

Those who regularly attend the meetings of the Coastal San Pedro Neighborhood know Dean Pentcheff as the man who represents waterfront residents in San Pedro. But Pentcheff, the council’s vice president, is also is very familiar with non-human creatures that live in the water or near it; he’s a research biologist for the Natural History Museum of Los Angeles County.

This past Aug. 19 to Sept. 2, Pentcheff was among a team of taxonomists who studied the genetic diversity of species in the coastal waters around the Palos Verdes Peninsula as well as the Port of Los Angeles and the Port of Long Beach. The intensive research project, which was run by the Diversity Initiative for the Southern California Ocean (DISCO), contributed to a database for a new technology called DNA barcoding, which allows the scientists to take a cup of seawater and analyze all DNA sequences inside. If any of the sequences correspond with DNA sequences of animals in a database, they will have a list of species present at the time the sample was taken.

“That’s an incredibly potent, quick and cheap way of serving the biodiversity of our coast, something that is increasingly important as our climate is changing,” Pentcheff said.

To give an idea of what the project was like, Pentcheff climbed down a ramp to a small dock adjacent to the AltaSea warehouses in the harbor and pulled up a rope that was submerged in the water.On the rope were a variety of species, including mussels, sea squirts, sponges, marine worms and worm tubes. People who worked on the project took plenty of specimens from ropes lowered into the water such as these.

Mussels tend to settle gregariously, said Pentcheff, as an explanation for why they were tightly packed together. Pentcheff took a small invertebrate that resembled a mollusk and held it in his hand. Pentcheff was not able to identify the species just by looking at it, but remarked that it looked angry as it repeatedly opened and closed its mouth.

Pentcheff said that while an average person could take home of one the creatures found on the rope, it would be illegal for him to take it for scientific study. The only reason DISCO was allowed to collect samples was because they had a permit from the California Department of Fish and Wildlife that lasted for two weeks. It is unusual for the department to grant a permit allowing the collection of so many species, but the educational nature of the project, and the fact that all data will be made publicly available, is a big part of the reason it was granted.

Pentcheff presented some of the project’s findings at the Sept. 16 meeting of the Coastal San Pedro Neighborhood Council. Twenty-seven taxonomists from all over the country participated, as well as some from Canada.

The project is contributing to the BarCode of Life Database, an international database of DNA sequences from different species. It has millions of reference sequences, but poor representation of marine invertebrates, Pentcheff said. Their work will dramatically increase the coverage in said database for the Southern California area.

“The activities and things we did during it are what we do normally in the DISCO program,” Pentcheff said. “We are engaged in trying to move the science of environmental DNA forward.” Pentcheff said that by these means, they can sample ocean water for DNA, and inventory and survey all the organisms in a given area.

While they are still sorting through the samples they collected, Pentcheff said they gathered roughly 4,300 specimen lots. They were collected by divers or nets from ships and brought back to a makeshift laboratory built in a warehouse at AltaSea, which allowed DISCO to use its property for free. Taxonomists identified the samples from the catch, photographed them while still alive, then took tissue samples for future analysis. The specimens were then sealed away for storage at the Natural History Museum.

The idea behind using genetic barcodes is to use a gene that is different among different species, but similar or the same within the same species.

“The challenge about a decade ago was to search through all of the sequences for all of the genes that have been derived across the animal kingdom and the plant kingdom and various others to find genes that had that really appropriate level of variability,” Pentcheff said.

“There is one gene that works really quite well for almost all animals, it happens to be the CO1 gene of the mitochondria.”

The CO1 gene has little or no variability within one species, but significant variability between different species.

“If you have the sequence of that one gene for an individual, you can attribute it to a given species, if and only if reference barcodes for that species have been registered somewhere,” Pentcheff said.

Divers would go out on boats, collect specimens, and bring them back on boats, sometimes docking right next to the makeshift AltaSea lab. Sometimes the boats docked at other berths and people working on the project drove to get them. Oftentimes the trucks carrying specimens were driven directly into the warehouse.

Pentcheff said they will not do the exact same project again, as if they did, they would likely collect a lot of the same species and data that they did the first time. They will likely do something similar, but focus on a particular groups or areas that they did not collect a sufficient amount of samples for the first time.