California’s Not So Golden P... 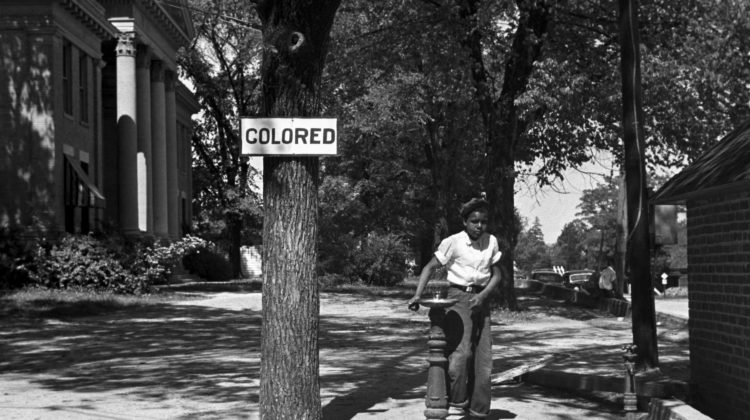 California’s Not So Golden Past

Five years ago, while teaching in the City of Orange, my students in a U.S. survey history course told me about the Ku Klux Klan recruitment fliers found in the area. I used this moment to ask my students about their knowledge of white supremacy in history.  Many of us, like my students, are taught that white supremacy is an exclusive product of the “Jim Crow” south, a stain on American history that occurred with the 1896 Plessy vs. Ferguson ruling. However, Kelly Lytle Hernández points out that in 1607, as the settler colonial elite conquered land and people, white supremacist terror ushered in genocide, chattel enslavement, colonialism and imperialism against the indigenous communities, blacks, Latinos, the Chinese, immigrants and people of color.

From its earliest days, California boosters have touted its weather, its bounty of natural resources and better economic opportunities. The state had a reputation for racial tolerance, too, but that was only true when white communities didn’t feel threatened demographically in their communities or with the job market. It’s why the memory of white supremacist terror against migrants, immigrants, communities of color and Jews remains almost non-existent.

Who remembers the Bear Flag Revolt? It preceded the 1846 American invasion of Mexico, which resulted in the Guadalupe Hidalgo Treaty that ceded 52,000 square miles of Mexican territory to the United States — that is, the present-day states of California, Colorado, Nevada, Arizona,  New Mexico, Utah and Wyoming. Who remembers the hundreds of Mexican and Mexican Americans who were lynched following the California Gold Rush and American land grab? What about the Foreign Miners’ License law or the Chinese Exclusion Act, which were passed  as an effort to maintain white supremacy? When laws failed to minimize economic competition by non-white communities, extrajudicial killings through white mob violence picked up the slack (i.e. the Chinese massacre of 1871). Let’s be clear, this is our history and we own it.

By the turn of the century, Southern California resembled any other bustling region across the nation, perpetuating discrimination, racism, and violence, against immigrants and blacks. By the 1920s, the Ku Klux Klan was active in Southern California, and spread to cities, like Inglewood, law enforcement and political office; within three years, there was allegedly more than 700 new members initiated into the Klan. Signs that read “Caucasian Only,” created a climate of fear meant to terrorize immigrants and blacks.

Whites vehemently opposed immigrants and blacks moving into residential areas, and created segregated spaces through racial covenants and used violence to maintain white hegemonic control. In the making of a segregated landscape, whites overtly and covertly reinforced the idea that whites were more important than blacks and immigrants in the building of Southern California.

In the 1920s, Christine Sterling’s emphasis of the white American narrative of Los Angeles in her romanticized rendition of a Mexican marketplace erased the founding history of Los Angeles. As Kelly Lytle Hernández reminds us, black musicians compared Los Angeles suburbs to Mississippi and Texas. Hawthorne was considered a sun-down town, as blacks were required to leave the town by dark. In the 1940s, racial covenants perpetuated residential segregation to thwart the second black migration to Los Angeles and surrounding areas, like Compton. Whites resorted to bombings, burning crosses and firing into the black homes in areas south of Slauson, and white gangs in South Gate and Huntington Park harassed black motorists.

In 1966, the Negro Motorist Green Book listed 224 sites within Los Angeles as safe havens for black motorists. Urban planning contributed to environmental racism as affluent towns are not divided by concrete barriers, like freeways, nor do residents suffer from health hazards, like oil refineries.

We like to think racism, institutional or otherwise, ended after the Reagan administration. But the battles over affirmative action and the presence of undocumented immigrants in the 1990s shows the embeddedness of racism and white supremacy in California’s political discourse. The  film, American History X, a film I’ve shown to my students in my race and ethnicity course at California State University Los Angeles is illustrative of this.

Set in Venice, the film is one of the most underrated movies of the ‘90s that addresses white backlash and violence to affirmative action, changing neighborhoods, immigrants, Jews, blacks, and the emergence of white supremacist gangs inside and outside of prison. The film follows Derek Vinyard through his journey to becoming a neo-Nazi. It didn’t happen overnight. It began with his dad’s racially tinged critiques of the books used in Derek’s history class. This film places white supremacy at the dinner table, in the hallways of the school, at the Korean grocery store, in intimate and familial relationships, at the Venice basketball courts and in the prison system.

I asked my students to pay close attention to the language, symbols and the violence of white supremacy. The film’s rhetoric is the same language used in 1994, when the state using the slogan of “Save Our State,” attempted to pass Proposition 187 to create a state-run citizenship screening system that would prohibit undocumented immigrants from public services.

We have read the same white supremacist language in the manifestos of white male domestic terrorists, and have heard it at Trump’s political rallies. It’s the same rhetoric grounded in toxic masculinity and fear used to incite violence; the alleged replacement of whites, protection of “white culture,” job insecurity due to immigration, and fear of the “other.”

My point is that many whites ignore the history of racial violence in California. Let’s be real, our problem is not with the “other,” although law enforcement, manufactured statistics, educators and institutions will have us believing so; our problem is perpetuating the false historical narrative by creating white-victimhood, and failing to recognize that this insidious ideology becomes deadly in praxis.

White supremacy has found its way into the prison system and on the streets of California. There are 83 active hate groups in this state, ranging from neo-Nazis to racist skinheads, to anti-immigrant and anti-Muslim groups. Formed in San Quentin prison in 1964, the Aryan Brotherhood used racial violence in the state prison system. The Aryan Nations began in Lancaster, Calif. as religious leader and white supremacist Richard Girnt Butler took over a large Christian Identity congregation. In 1988, former Aryan Nations guard Buford O’Neal fired more than seventy rounds at a Jewish community center in Los Angeles and killed Filipino-American postal worker, Joseph Santos Ileto.

In 1999, racist skinheads crushed the head of a Mexican immigrant, Ireno Soto Aguilar in Lakewood. Contemporary white supremacist/power groups in Southern California, like the Orange County-based Rise Above Movement, have joined with other neo-Confederate, and neo-Nazi groups across the nation. How many of us saw images of white males at the University of Virginia, carrying tiki torches and shouting “You will not replace us!” in 2017. Do you not remember the violence and murder of Heather Heyer at the Unite The Right Rally in Charlottesville, Va?

White supremacy is as American as apple pie and California represents a slice of that pie. White supremacy isn’t just a relic of history, it’s a real phenomena that this state holds. It’s a vision that claims that this state does not have a strain of fascist and racist thought in its DNA. The fact that a number of Trump’s cabinet and inner circle have come from Southern California should shatter this belief. White supremacy is a home-grown product that maintains an unequal economic, social, and political structure in the state, and is supported by law enforcement, racist educational institutions and our unjust judicial system in which whites have “otherized,” people of color. We need to acknowledge this.