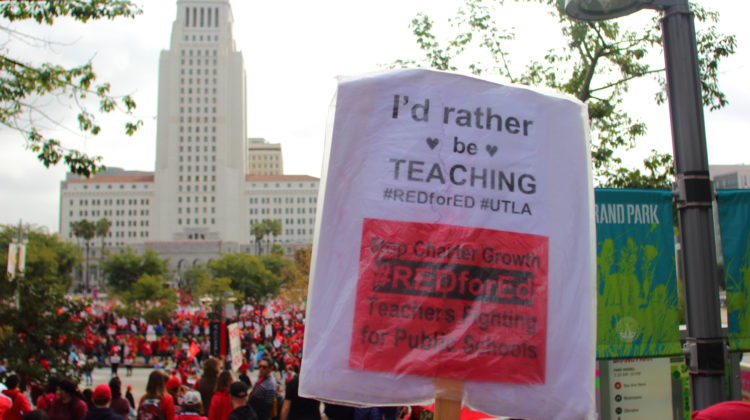 Strike: Did UTLA settle too soon?

To understand the historical significance of the recent teachers’ strike against Los Angeles Unified School District I direct you to a PBS documentary that aired a few weeks ago about the Latino student uprising in East Los Angeles in 1967-68. It’s online at https://tinyurl.com/KCET-EastLA-Student-Walkouts.

The film captures the  beginning of a long march towards justice and equity in public education for racial and ethnic minorities who now comprise the majority of Los Angeles Unified students.

Since that time 50 years ago, there has been a slow but intentional disinvestment in public schools from K-12 and the California State college and the University of California system. Remember, this was the era of Gov. Ronald Reagan, and  later the anti property tax measure Proposition 13.

Both were intent on downsizing government and defunding education. This was the dawn of rising college tuitions and the militarized crackdown on student protests in both high schools and colleges born of the realization that a well educated underclass was harder to oppress. These uppity Mexican kids wanted to have the same academic opportunities as the white kids. This seemed to be and actually was the perspective of the all white school board, not just in Los Angeles, but across America at that time.

Reagan’s legacy of cracking down on student demonstrations, closing the state mental health facilities and starting down the path of building more prisons while not investing in schools are with us still reminders of this pivotal time of conflict that arose out of the Vietnam War, Civil Rights and the reactionary response to both.  We are only now beginning to unwind the inequities of those misplaced policies, anti-union efforts and racial injustices. Did the UTLA strike go far enough in redressing these grievances?

Clearly, during the course of the intervening years, more people of color have become educated and become teachers, administrators and even elected school board members. Yet the systemic pressure to defund public education persists. We spend far more to keep people incarcerated in California than we spend on educating students who are not in prison.

Only now are we beginning to think about the costs these wrong-headed policies have brought us. Just think about this: from 1982 to 2000, California’s prison population increased 500 percent. To accommodate this growth, the state of California built 23 new prisons at a cost of $280 million to $350 million apiece and grew the number of inmates to a peak of 173,942 in 2006.

This was precisely the time period when conservatives started to criticize public education as being inadequate and began the effort to privatize it. This was not a coincidence. Remember, the highest percentage of inmates are Latino (39.8 percent) and black (28.9 percent), with just 25.2 percent white. Since this does not reflect the demographic breakdown of California’s general population, where does this inequity start?  It begins in our public schools.

The importance of the just-concluded UTLA strike is that for the first time in 30 years the teachers union stood up to the power structure and demanded a fundamental change in the equation of funding and services for students. The vast majority of parents and the community came out in solidarity with them. This is a learning moment. This is a time for real change. Did UTLA get the change they demanded?  The answer is probably, “kind of, sort of.” I’m not sure UTLA, even now, realizes the political power it holds.

This is the moment in which a truly cultural shift can occur, returning  control of public schools to the public. But the parents weren’t invited into Mayor Garcetti’s mediated bargaining room at City Hall.  The demands on the LAUSD needed to include actually opening up the schools to the communities they serve. All of these campuses should be open for extended learning experiences in the 1,322 neighborhoods in which they are located.

These schools are surrounded by chain link fences that resemble prisons more than schools. The gates should be unlocked to the community for more than a few hours to provide community access for acceptable public activities, adult education and public meeting space. Los Angeles’ public schools need to have meaningful and empowered public engagement and oversight — not window dressing parent committees.

If our school system is going to be the foundation of democracy, which literacy and knowledge truly are, then what better way to teach civic engagement than to give local communities real oversight of schools?  Yes, class size actually matters, as does balancing the budget, but returning real authority to local school councils of concerned parents, teachers and administrators would go a long way to stem the flow of dissatisfied parents to charter schools.

In the end, both UTLA and LAUSD need to engage with the communities they serve by opening up the gates of education and allow for the creative efforts and aspirations of students and parents to change the system. The union has shown it can get organized and mobilize the community for the greater good. But can anyone tell if there’s a vision beyond this contract?

Can we really turn around the trend of the past 50 years to reinvest in public schools and make them the best learning places? I believe UTLA did not go far enough or wait for the best offer.