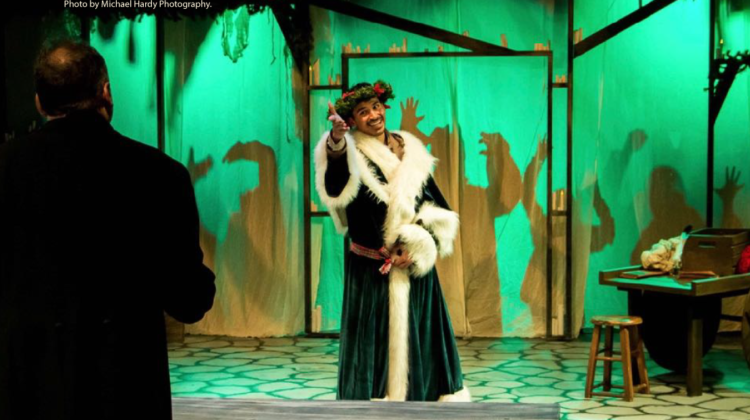 Before A Christmas Story, before the classic claymation of Rudolph the Red-Nosed Reindeer, even before It’s a Wonderful Life, Charles Dickens’  A Christmas Carol established itself as a  staple. You know the story: Scrooge, rich in pocket but poor of heart, is shown the error of his ways via a series of visitations, then turns it all around in the Saint Nick of time, and “God bless us, everyone!”

With such built-in familiarity and the boob tube bringing various film versions into your home for free this month, why carve out a night during this busiest, spendingest ‘tis the season to hand over a bit of your hard-earned money to see what Long Beach Playhouse is doing with it? I’ll tell you why: because this is the most fun anyone’s had with Dickens this side of Scrooged.

Okay, stay with me here. Collins (Jack Murphy) heads an itinerant theatre troupe that has seen better times. It’s Christmas Eve, and with no audience to be had, Collins has lost his love of life — forget about Christmas spirit! — and he no longer sees eye-to-eye with his actors. With nothing better to do, one of them (Michael G. Martinez) proposes a challenge: the troupe will improvise a Christmas play, through which Collins will regain his esprit — in which case he will cede leadership of the troupe.

No, it doesn’t make much sense, but it doesn’t really matter, because this is just an excuse to put on the improvised play, which is, of course, A Christmas Carol, with Collins spontaneously taking on the part of Scrooge. And it’s a welcome excuse, because this “improvisation” makes A Christmas Carol new and hella fun, all while adhering faithfully enough to the source to please all but the most inflexible traditionalists.

To be clear, the Long Beach Playhouse cast is not improvising. This show is a scripted adaptation by director Larry Mura and his wife, ‘Phie, incorporating much of Dickens’ dialog verbatim. The fictional actors on the streets of 19th-century London are the ones improvising (impossibly well, obviously. “Did someone write this down?” one of them asks near play’s end), and it’s our pleasure to watch them invent the plot on the fly, find and fill their numerous roles, and employ their bodies as sets and props to bring their story to life.

This conceit would have zero chance of working were it given to a cast that could not meld completely as a collective and move with such fluidity between the worlds of Dickens and the (fictional) actors that for the audience there is no separation between the two. Their success is such that in one moment we’re giggling as a junior member of the troupe (played by Baiinga Lontho) complains about being relegated to minor roles such as the door to Scrooge’s office (and there are a lot of laughs along these lines), then the very next we’re moved by Dickens’s redemptive narrative.

And this is, after all, A Christmas Carol, so that’s critically important, no matter how fun the other stuff is. The Muras haven’t sacrificed this sacred cow so much as gussied her up. We get our ghosts and Cratchit and Tiny Tim, along with all the heartwarming words that make this 19th century work a timeless classic. And if you’re anything like me, sentiments like “think[ing] of people below [us] as if they really were fellow-passengers to the grave, and not another race of creatures bound on other journeys” get you every time, even if you already know them by heart.

Mura directs the show to perfection. There is an elegant ebb and flow to the pacing, and the blocking always focuses our attention where it needs to be, while the ancillary actors in a given scene always keep the background interesting. The cast is so uniformly good that there aren’t really any standouts, and their moments out of the spotlight are just as valuable to the play’s overall success as their starring turns.

“Men’s courses will foreshadow certain ends, to which, if persevered in, they must lead,’’ Scrooge says after returning from his journey with the Ghost of Christmas Yet to Come. “But if the courses be departed from, the ends will change.” Seeing him learn this lesson — and put that knowledge into action — is a good reminder of how we forge our lives link by link, moment by moment; and what a hell of our own making it would be to find out too late that we’ve chained ourselves to that which doesn’t really matter.

That may be the greatest value of revisiting A Christmas Carol each year, and Long Beach Playhouse’s adaptation wraps it up for you in a package that is funny and new.