Why a Hardware Store Isn’t L... 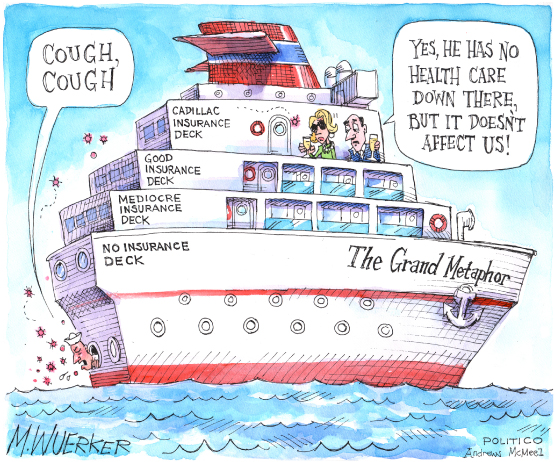 Sam at my local hardware store has a supply of N95 masks that he’s not price gouging on but limits the purchase  to three per customer.  He says it’s been hard to stock enough of them because he has some large customers like police and fire departments that want to buy them by the pallet.  He tries to accommodate them but still, there’s a national shortage and a huge demand because of the novel coronavirus pandemic.

One would think that with the demand so high for protective medical equipment that the manufacturers would be working day and night to fill the need. Yet, they were caught short as if they weren’t tipped off to the coming demand and the federal government is not telling these manufacturers where to prioritize their shipments. It’s probably one of the few sectors of the economy not laying off workers.

Hospitals, on the other hand, are a service. Why they are run like a business is one of those contentious discussions that has been thrown around like a bowl of hot minestrone soup hoping that it doesn’t spill. One side is committed to maintaining the status quo, which ensures the existence of insurance companies, while those committed to changing the system argue that the business of providing health care should be like a public utility. Long gone is the idea of community-owned hospitals or those that are run strictly as religious charities, most have been absorbed into chains operated on the business model.

There are some 40 million Americans who still don’t have health insurance as the Donald Trump administration and Republican controlled states try to roll back the Affordable Care Act — it probably should have been called the Mandatory Health Insurance Act — as it really didn’t deliver on the affordability part, due mostly on the part of  Republicans obstructing anything that smelled of national health care.

Still, what we have seen over the course of the past 40 years is a drift to the privatization of hospitals with a business model that even some “not for profit” health care networks use that looks more like a for profit business than a charitable institution. This pandemic has exposed the failings of our expensive health care industry – and one can hardly call it a “system” at this point.

State governments are scrambling to open and operate closed facilities, create new ones with the help of the Army Corps of Engineers or call on the federal government to supply hospital ships to Los Angeles and New York, clearly the laissez-faire capitalism that conservatives tout as the best economic model doesn’t work when called upon to combat an pandemic. The response that seems to be working are those solutions that progressive Democrats come up with. But why is that?

For the past decade, if not before, there has been a series of policies to defund certain government spending, almost all of them on the domestic front but almost all of it justified by conservative fiscal policies to lower taxes, spend less on public schools and cut funding for what we now realize belatedly as critical public health infrastructures.

Much of these policies were promoted on the basis of lowering the national deficit and yet, here we are after 10 years of a boom-boom bull economy, passing a $2 trillion legislation to both fight a virus and save that same capitalist economic structure.  And what do they use as a cure? A congressional mandate for $1,200 in the pocket of every tax paying citizen who’s not a millionaire, an idea that we all thought former Democratic candidate Andrew Yang was crazy for suggesting and economic support for workers and small business that even Sen. Bernie Sanders voted for. Sanders still has some reservations about $450 billion going to large corporations during an election year.

So some have asked, “Why is it that countries like Italy and Spain, who have robust national health care fail, so miserably in the current pandemic?” The answer is explained by Sebastiaan Faber, a professor of Hispanic Studies at Oberlin College and the author of Memory Battles of the Spanish Civil War.

In a Real News Network interview he explains:

The second big trend that has weakened the public healthcare system in Spain has been the constant steady push toward privatization, especially by conservative governments at the regional level, that have consistently pushed to take public facilities and privatize them, or to allow private for-profit companies to manage or take over public healthcare services.

This all sounds rather familiar to what we’re witnessing here in America, yet we don’t even have a national health care system, except for Medicare for old folks and a patchwork of county and state health departments and a few dozen privatized hospital monopolies whose main job is to lower their expenses.

As it becomes clearer that the Trump administration did nothing to prepare for this pandemic, even though they were briefed on it in December of last year, the growing chorus of stunned disbelief at his daily press briefings only adds to the chaos that we’ve grown to accept in his reality TV show mayhem.

Recently Trump said, “We would be doing a great job” if the number of deaths resulting from the coronavirus was limited  to 100,000.  Trump said this not long after he said he wanted everybody to go to church on Easter Sunday. This is perhaps the most bizarre part of his delusional thinking. Perhaps he thinks he could raise the dead like Jesus on Easter? Trump is using the press briefings as a way to spread misinformation, campaign for re-election and bully reporters who challenge him.

By contrast, the daily press briefings by California’s Gov. Gavin Newsom and New York’s Gov. Andrew Cuomo show what effective government leadership and what a social democracy that “does for the people that they can’t do for themselves,” looks like.

Running a health care system is nothing like running a hardware store and please help us from a man who can do neither and would bankrupt both if allowed.  Oddly enough creating a national health care infrastructure is now being done state by state, week by week as COVID-19 spreads. But the nation will not call it socialism, but a necessary cure to stem the tide of this pandemic.