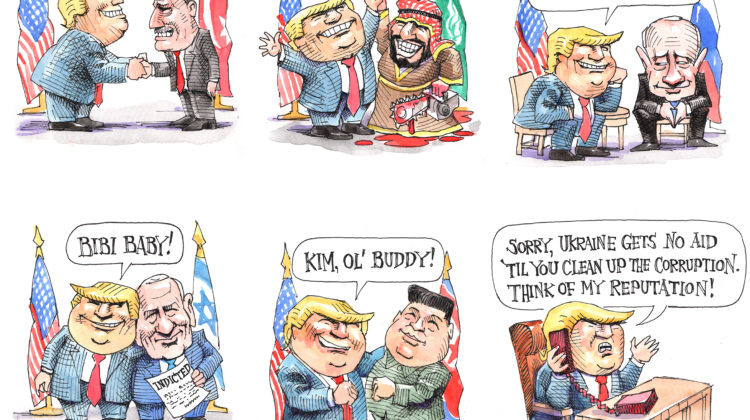 Impeachment for Christmas — Will Someone Just Give Him a Shovel?

“The President, Vice President and all Civil Officers of the United States, shall be removed from Office on Impeachment for, and Conviction of, Treason, Bribery, or other high Crimes and Misdemeanors.”

‘Twas two weeks before Christmas and the nation was hoping not for a tweet; When the donkeys in the House of Congress decided it wasn’t time to sleep.

There was ruckus and commotion from both the Dems and Reps; It was like a mouse escaped in the circus that elephants keep

They trumpeted their accusations as though this was unfair; About the ring leader who is emblazoned with orange hair; They stomped their feet and shouted and asked

But the only response was that the Dems had the facts.

So at this writing it’s the night before the impeachment vote and the president sent a six-page letter to the speaker of the House, Nancy Pelosi protesting this as an “invalid” action. This while the U.S. Constitution clearly states above that it is the “sole power” of Congress to impeach. Even with this 11th hour attack, Donald Trump keeps reiterating the false accusation that this process is a “witch hunt” and the letter is littered with at least 19 false statements or exaggerations as annotated by the New York Times.

The reading of Trump’s letter is quite astonishing as it reveals the alternate reality he is living in or that he wants us to believe; and with every lie and exaggeration he just seems to dig himself deeper into the same hole he has already dug for himself. He just can’t seem to stop and he wants everyone else to join in on digging the hole deeper. If the consequences of his official actions didn’t have dire results, like caging children at the border, one could find the humor in this like some Shakespearean farce — but no it’s a tragedy of historic import.

Clearly there are a few dozen causes for impeachment that Trump has racked up since he first started his campaign for the presidency, not the least of which is the hush money to Stormy Daniels and the Playboy model. But the Democrats have narrowed it down to just two articles — abuse of power (encompassing the federal crimes of bribery and wire fraud) and obstruction of Congress. I suppose they are trying to keep it simple both for the public, which is just getting ready for a long winter’s nap and for his simplistic defenders, who are all given their tweeted talking points hourly, or possibly minute by minute, as Trump monitors the action on Fox News.

This singular source of “news” with its far right slant along with the echo chamber that follows its lead is probably more responsible for the rise and deification of the Trumpster into an idol of historic proportion than anything else in America today. He outrageously believes that he can do no wrong, can’t be prosecuted or investigated for any wrongdoing while sitting in the Oval Office. Yet the leaks and the whistle blowers keep letting the light in through the cracks. What is it that President Abraham Lincoln said, “You can fool some of the people some of the time but you can’t fool all the people all the time”? Well it’s Don’s time in the barrel.

If you take a deep historical dive into the intent of the framers of the Constitution, Congress puts Trump’s actions in the context of today’s anti-bribery laws, noting that “criminal bribery occurs when a public official:

• ‘anything of value personally,’

• ‘in return for being influenced in the performance of any official act.’ Additionally, the public official must carry out these actions,

The judicial committee report walks through these elements one by one, showing how Trump’s actions meet the standard for criminality. This of course is just what the Republicans were asking for when they kept repeating, “but where’s the crime?”

Even though the media keeps saying that there’s only been three presidential impeachments, excluding Nixon who resigned before it could happen, Congress over the years have impeached and convicted federal judges, some quite recently. Some of them just for being drunk on the bench.

Where does the wire fraud come in? Because Trump “knowingly and willfully orchestrated a scheme to defraud the American people of his honest services as president of the United States. In doing so, he betrayed his position of trust and the duty he owed the citizenry to be an honest fiduciary of their trust. That offense is codified in the federal criminal code, which imposes up to twenty years’ imprisonment for public officials who (by mail or wire fraud) breach the public trust by participating in a bribery scheme.”

The evidence is in the telephone transcript.

So just to my point of digging a deeper hole into another universe, Trump writes:

By proceeding with your invalid impeachment, you are violating your oaths of office, you are breaking your allegiance to the Constitution, and you are declaring open war on American Democracy. You dare to invoke the Founding Fathers in pursuit of this election-nullification scheme — yet your spiteful actions display unfettered contempt for America’s founding and your egregious conduct threatens to destroy that which our Founders pledged their very lives to build. Even worse than offending the Founding Fathers, you are offending Americans of faith by continually saying, “I pray for the President,” when you know this statement is not true, unless it is meant in a negative sense. It is a terrible thing you are doing, but you will have to live with it, not I!

And his denial goes on, shovel by shovel, for six pages. No evidence to dispute the facts that were supported by sworn testimony of 17 witnesses — just his “alternative reality” with a “perfect” phone call.

So, please wrap up your shovels, friends, and send them to Donald’s defense fund at 1600 Pennsylvania Avenue NW, Washington, D.C. 20500. Perhaps if he digs deep enough, he can get to China to sign a trade deal by Christmas 2020.