All Part of the Same Problem 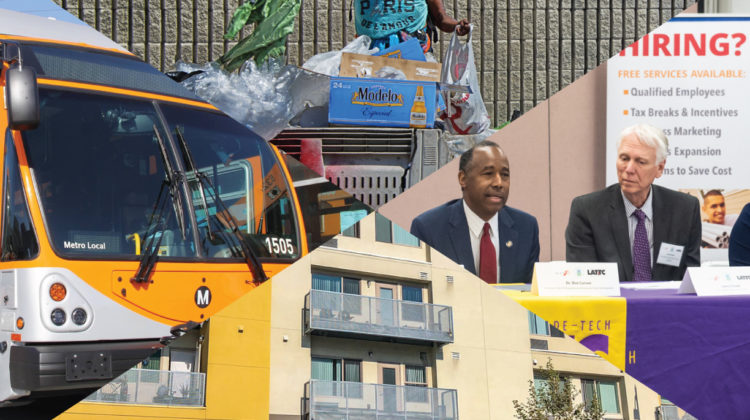 All Part of the Same Problem

Just the other day I read a story about how the government’s response to the housing crisis isn’t hitting the mark. From the mayor of Los Angeles to the governor of California they are scurrying around showing concern but not enough is getting built and probably won’t be soon enough to stem the homeless crisis. With the average cost to build reaching upwards of $500,000 per unit and the amount of time it will take to actually build 10,000 new apartments, it still won’t be enough to cure the problem.

Realizing that access to transportation is critical in Los Angeles, city planning and zoning have reduced the number of parking spaces for projects along transit corridors. The thinking, I suppose, is that when traffic gets bad enough people will actually give up driving to work. That may happen sooner than most Angelenos care to admit. After all, Los Angeles is car culture — we love them and hate them. We have museums dedicated to them and have built concrete monuments with sculptured steel infrastructures that will outlast the most durable cars and us.

Freeways are the legacy of the 20th Century brought to us by the intentional demise of the Red Car by the oil corporations and auto industry. One hundred years ago there were thousands of miles of tracks that stretched from the mountains to the sea both east and west, north and south. You can see the remnants of these here and there, but mostly covered over now.

A few years ago the city was digging up the street in front of the historic Warner Grand Theater on 6th Street in San Pedro and, low and behold, underneath the asphalt were the old Red Car tracks coming up from the Harbor.  They had to cut out a section just to get to the plumbing under the street. The history of this place has been paved over, stuccoed and “modernized.” We’re lucky to have anything remotely historical left in a city hell bent on reinventing itself.  Just look at all the new developments going up.

Even so, with the newfound “rush” to build, build, build, the San Pedro Harbor Area is still years behind the curve and a significant distance from reaching the housing goal set out for this part of LA’s closest-to-sea neighborhood. At the turn of this century, the Urban Land Institute was hired to study downtown San Pedro and issue two reports. In those reports, it was stated quite clearly that for there to be a viable local economy, 3,000 to 5,000 new units of housing needed to be built. Before the Great Recession, some 1,200 units might have been built and expectations were on the rise. Then there was nothing for close to a decade.

Even with Councilman Joe Buscaino’s cheerleading there are only 420 new units being finished now after years of waiting. Of these, not even 3 percent will be for low income tenants. The bright side is that there are at least another 400 units now working their way through the labyrinth of city planning with the hopes of being built before the next recession. If you don’t count the project on Western Avenue, once called Ponte Vista (now called High Park), then we might get close to some 2,200 units, but that doesn’t even approach the low end of the ULI report’s target.

Lest we forget the hard times of the 1980s in the Harbor Area after the loss of some 30,000 jobs to free trade and the closing of the local shipyards, San Pedro was left without any plans and has struggled at every turn three times since. You may be thinking that the third time’s the charm but I’m not given to magical thinking. This time around, it’s imperative to bring back and retain good, local middle class jobs, build affordable housing, while solving the homeless crisis and at the same time, adding transportation.

Any smart urban planner will tell you they are all one problem, not four separate ones. Yet, civic leaders are trapped in a whack-a-mole problem-solving paradigm, completely unable to consider more holistic solutions. This is not just true of LA’s biggest little town. It’s true for the entire urban sprawl. Nobody actually plans for urban development, even when there’s a community plan. It’s just a lot easier to see it here in San Pedro. So what’s there to do?

It’s been years since a comprehensive traffic-transportation study has been completed that projects the impacts of port and trade expansion; a study that also projects what will happen when San Pedro meets the ULI goal of 3,000 units; a study that projects what will happen once the port develops the west side of the main channel and attracts millions visitors a year to this quaint slice of Los Angeles?

The unintended consequences of all these aspirations will converge into a massive traffic jam with only two ways to the freeway. Without what we once had 100 years ago — a rail line that will get us from here to the rest of LA without getting in a car.  Currently, that plan is decades in the future unless we wake up and demand that it happens sooner rather than later.