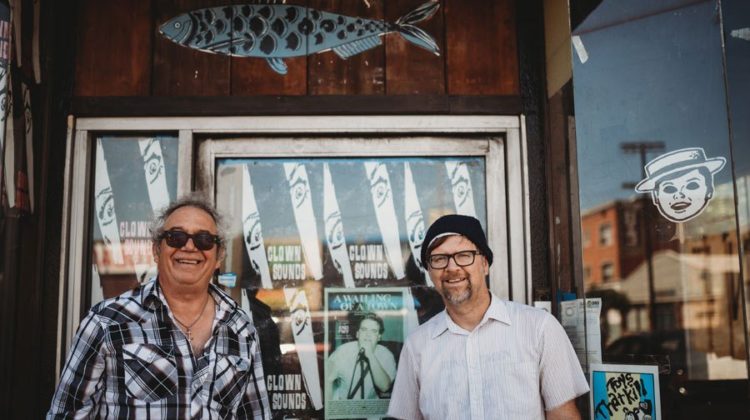 From Punk, The Sardine to Missingmen

On a hot Saturday morning in September, I watched Mike Watt and Todd Congelliere jam together on the stage of the yet-to-open Sardine Club on 11th and Pacific Avenue. Except the sound from their instruments and their mouths was mute. The pair were faking it, performing for a music video that would be dubbed in the studio. The video shoot was for a yet-to-be-released album, a collaboration by Watt and Congelliere, artists who represent two distinct eras of punk in the Los Angeles Harbor Area. The 15 songs they’ve created for this project show they still represent the core of what makes punk music.

Todd is best known for his roles in bands like F.Y.P., Toys that Kill and Underground Railroad to Candyland. And Mike, well, he’s a living icon, a co-founder of the Minutemen, Dos, and fIREHOSE, with bandmates George Hurley and the late D. Boone. The words “independence,”  “Do-it-Yourself” and “anti-establishment” are synonymous with both punk music and these two recording artists.  It makes the current predicament of The Sardine a curious one.

Although The Sardine  has been receiving praise from all corners of San Pedro’s civic community and has been actively promoted and boosted by 15th Council District Councilman Joe Buscaino, the grand opening of the bar and music venue has been held up for the past eight months by LA’s Building and Safety Department’s various plan checks and endless inspections.

Todd believes the LA Building and Safety plan checker has it in for the aging punkster enterprise. On Monday they are going back to city hall for yet one more “review” of the plans. They won’t tell how much this has all cost, but Todd is complaining that it’s making him broke.

On this day, however, Mike and Todd are kind of in a playful groove as they mime a silent movie version of their pre-dubbed music video. After eight tracks, Watt gets out a crowbar and pretends to use it for opening an upright piano just so he can play a D Major chord, an antic fit for a Laurel and Hardy scene.

Not long after this, Mike took a break and spoke with me about his upcoming  45 day-45 show tour with the Missingmen, moving clockwise from the West Coast around the country returning through the South.

“In the fall you go clockwise and in the spring you go the other way,” Mike said. “It’s about the weather.”

Mike put the Missingmen together, featuring bandmates Tom Watson and Raul Morales, in the late summer of 2006 to help realize his third punk opera,  Hyphenated-man.

“My choice of  Tom Watson and Raul Morales was very deliberate. “Tom Watson [on guitar], comes from my “older days” Mike said… “He knew D. Boon.”

Watson was a member of Slovenly, a San Francisco-based punk band in the 1980s. Watt’s record label, New Alliance Records, released Slovenly’s first records. Since Mike had decided to use what he calls “parallels to his work from his days in the Minutemen, he said he needed someone with a link to those days.

Tom toured with bands such as Mike Watt & The Pair of Pliers and Mike Watt & The Jom & Terry show in the late 90s and early aughts after Slovenly disbanded. But Mike said those bands had no “piece to focus on except for gigs and tours.”

The other member of the Missingmen is Raul Morales, a Pedro guy Mike met via a five-piece rock band out of Baltimore called Vinny Vegas. The band was playing a gig at a house on Fourth Street near Gaffey, a Pedro music scene Mike told me was called  “porch-core” that developed in the 1990s.

Mike recruited Raul to play the drums because of his link to “newer days” and liked how he played.

As with Tom, Mike played with Raul before he formed the Missingmen. Raul was in the Mike Watt and the Secondmen, a band Mike  put together in 2002 to help realize his second opera, The Secondman’s Middle Stand.

“Raul was touring with the Secondmen in place of  the original drummer man, Jerry Trebotic, who couldn’t be a part of it,” Mike said. “The first Mike Watt and the Missingmen tour was the “parallel universes” a few months after getting together.”

Mike chose the name Missingmen for Tom and Raul because a couple of years earlier Mike was helping Keith Schieron and Tim Irwin with their We Jam Econo documentary on the Minutemen.

“To prepare myself for the interviews,” Mike explained, “I started listening to Minutemen music again, which after D. Boon passing away was very difficult for me.”

Boon died because he was lying down in the rear of the van without a seatbelt due to sickness and a high fever. While on Interstate 10, the rear axle broke and the van ran off the road. Boon was thrown out the back door of the van and died instantly from a broken neck.

After he started listening to the old Minutemen music again, Mike said he really wanted to somehow play this music again but make it relevant.

“That’s where I got the idea for the Hyphenated-man libretto,” Mike explained. “I would write lyrics dealing with myself as a middle-aged punk rocker, which is something the Minutemen never dealt with really.”

Mike said he figured this would keep things from being just a stroll down memory lane “or some regurgitation kind of lame thing,” Mike called it.

Tom and Raul helped Mike with the music he felt was missing.

“By that I mean the forms and stuff, not the content,” Mike elaborated.

“I didn’t see them as replacements for D. Boon or George,” Mike said. “Instead, I wrote Hyphenated-man with both Tom and Raul in mind even though, musically in some ways, I was looking back at my days as the Minutemen.”

Another way in which the Missingmen departs from the Minutemen is that Mike wrote the whole album on D. Boon’s Fender Telecaster guitar. During their Minutemen days, Mike said he wrote very few songs on a guitar.

“I mainly composed on bass. It’s still like that with me,” he said. “Writing for the Missingmen using a guitar makes this project pretty unique for Tom and me.  Tom should get much respect for interpreting my stumblebum guitar playing. He’s amazing, truly.”

The Missingmen did five tours of Hyphenated-man between 2010 to 2015.

“Even though Tom and Raul big time-successfully realized the mission (recorded it and then play it for people), I didn’t wanna stop playing with them now that it was time to move on,” Mike said.

So he started writing new material for a brand new Missingmen album for them to play, not focused on a piece like the original goal (to realize Hyphenated-man) of the band.

“In the meantime we’ve been doing revivals of tunes I wrote for the Minutemen 30-plus years ago,” Mike explained. “Some were never recorded or even played live by the Minutemen,” Mike said.

“But it’s interesting looking back on my journey through music how these early works of mine shaped my direction,” Mike said reminiscently. “It’s also a good ‘palate cleanser’ to get us ready for this next album I’ll do with the Missingmen. I love playing with Tom and Raul.”

The 45-day Missingmen tour is blowing its way around North America now and will end in Los Angeles at the Echo on Nov. 2.