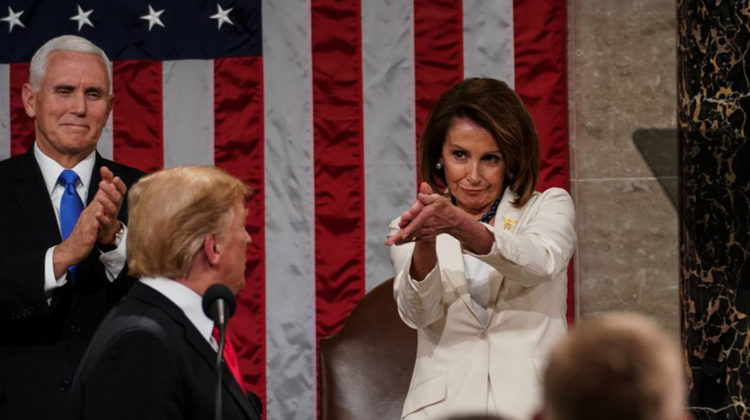 Half truths, obfuscations and lies, but this is not the end

It seems almost incomprehensible that after having shuttered the government for 35 days President Donald Trump could stand before Congress and ask for bipartisanship and compromise. Perhaps it’s just that America has grown accustomed to this particular occupant of the Oval Office lying so frequently that it no longer seems to matter.

He says America is now a mass exporter of energy, which is only half true. We still import more oil than we produce. He stood there and spoke against anti-Semitism and yet, with his actions and words, has sparked more racism and hate than any president I can remember.

He celebrates World War II veterans and the noble cause of fighting tyranny as they liberated Nazi death camps nearing the end of that war. Yet, this man never served a single day in the military and was exempted from the Vietnam War draft by a bogus doctor’s note.

He pronounces he is going to “Make America “Great Again” by returning to the Ronald Reagan era fantasy of “Star Wars” by building ever more advanced armaments, including a laser satellite defense system. What one can only be certain of is that whatever Trump says can’t be trusted.

If anyone took the time to deconstruct his one hour and 22-minute prelude to his 2020 campaign, they would find more half-truths, obfuscations and lies than anything but more patriotic bluster.  Did any Democrat or any of the women celebrating the women’s suffrage movement by wearing white expect anything different?

A few of the only “truths” to emerge from this State of the Union speech is that the House of Representatives is clearly divided and the political scars of the past two years are ones the new majority are unlikely to ever forget.

If there is anything that divides Republicans from Democrats more it is the almost religious belief in the fundamental creed that democracy and capitalism are the foundation of our republic. This all sounds good when you are fighting the Cold War, but America has moved on from this tired old dialectic of American exceptionalism versus the evil empires to something more informed about our own abuses of power, empire and corruption.

Trump’s vague attacks on calls for socialism didn’t go unnoticed. Clearly, if he understood anything about economics or the briefing papers he never reads on the U.S. budget, he’d realize that somewhere north of 33 percent of our gross national product is tied to government spending (some years as much as 37 percent). And the Defense Department is by far the largest “socialized” spending item.

According to Webster’s Dictionary, socialism is defined as, “any of various economic and political theories advocating collective or governmental ownership and administration of the means of production and distribution of goods.” This definition fits not only the U.S. military where housing, food, healthcare and food are delivered to service members and their families by Uncle Sam, but also to many other federal government departments. That includes the billions of dollars in defense contracts and covert programs administered by our government. I mean is there anyone who really wants to privatize the national parks, the work of Homeland Security and  Border Patrol? And then there is Social Security, the most popular socialized program of the past 70 years.

Just by sheer numbers the government is the largest employer in the nation and has a huge impact. We recently witnessed a 35-day shutdown where just one third of the government workers were furloughed. The economic impact on our “capitalist system” was felt first by workers, then on Wall Street. The shutdown has delayed fourth quarter economic growth projections while the impact on the first quarter of 2019 is still being ascertained, even as Trump continues to insist on money for “the wall.”

What is perhaps more important to those of us who live next to the largest port of entry into America is the president’s pronouncement about all the illegal drugs coming across the southern border, which again is untrue.  The vast majority of illegal drugs come via smuggling through our ports of entry, including right here at the ports of Los Angeles and Long Beach where less than 3 percent of the growing number of containers are actually inspected.

On the threat of huge caravans of immigrants storming our southern border and sending more troops to defend us from the hoards coming north, the number of undocumented immigrants apprehended from Mexico is at an all-time low.

Yet, the number of people flying into our country and overstaying their visas is huge, which is not to mention the Chinese birth-mother tourism group that recently got indicted by the Justice Department.  The birth tourism schemes as they were described in the indictments are ones in which foreign nationals, mostly from China, lie about the length of their trips and the purpose of their stay when they apply for visitor visas to the United States. They would come to the U.S. for three months to give birth so their children would receive U.S. birthright citizenship.

This of course is never mentioned in Trump’s tirades over illegal immigrants and his false claims of the amount of violent crime perpetrated by “illegals.”

If, however, you still believe that Donald J. Trump is going to be impeached, indicted and driven from office before the next election, this speech was just the opening salvo of what we’ve come to expect from our first reality TV president. Which I must add has nothing to with “reality” but everything to do with concocting a narrative that replaces facts and truth.  And yet, there’s still one major question that has gone unanswered these past two years: Where are Trump’s tax returns that he says are being audited? One look at those documents would probably do more to get him relieved of duty than anything else!