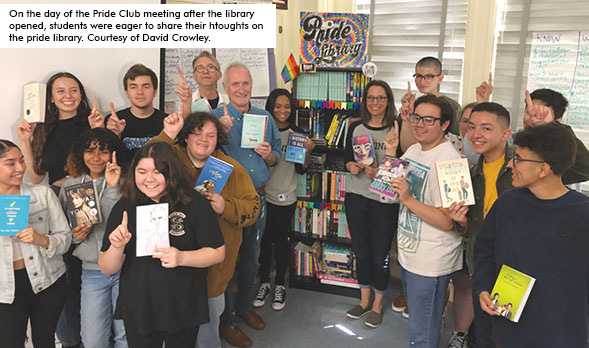 The library holds more than 100 LGBTQ+ Young Adult novels, classics and histories, which were provided by the San Pedro and Palos Verdes Peninsula Rotary Club and The MJ Project, a literacy advocacy nonprofit that places high interest books into the hands of young readers by donating to classroom libraries. Crowley, who started the San Pedro school’s Gay-Straight Alliance 20 years ago was responsible for sponsoring the first LGBTQ+ entry into the annual San Pedro Christmas Parade in 2019.

The inspiration for turning Crowley’s classroom into a library came from a former student, Joseph Silvas, who told Crowley about the MJ Project, while also contacting the MJ Project to reach out to Crowley.

Crowley knew he wanted to have a LGBTQ+ books in the library and the Pride Club kids liked the idea too. The veteran teacher searched online for a library to model what would be built at San Pedro High, but came up empty. He had found that a few teachers across the country who were including just a few LGBTQ+ books in their classroom library were taking heat for their efforts. This only motivated Crowley more to turn his classroom into a library.

Students, praising Crowley’s efforts, hailed the LGBTQ+ library as one that should have been established long ago.

“It should have been sooner,” Pride Club president Elizabeth Yglesias said. “Especially with the progress made since the 2000s with representation in TV shows. That was pivotal to the movement and it allowed audiences to be more accepting.”

Yglesias went onto say that she was  proud to be in the first high school classroom to have a library like Crowley’s.

“We deserve this library and to read stories about us, I’m extremely proud to have something this inclusive,” Yglesias said.

Pride Club secretary Kassandra Lujan said having the library means a lot to the students in the Pride Club.

“People in the books relate to them,” Lujan said. “Most books are about non-LGBTQ people and there’s many rules … school libraries have banned these books. With San Pedro High, we have books for everyone. If you’re trying to come out, don’t be scared. You should feel love everywhere.”

Crowley wants the rest of his students to see a pride library and to pique their curiosity and maybe pick up a book and read it too because gay kids have been reading straight works of fiction their whole lives. He figures it’s probably good for straight kids to be exposed to LGBTQ characters.

“When we learn about people that are different from ourselves then [there’s] more understanding and compassion and less bullying,” Crowley said.

Crowley told a story of a student who came into his classroom, a “typical straight, skater kid” who was looking at the library. Crowley asked him if he wanted to check out a book. The student said maybe. Then Crowley pulled out Will Grayson, Will Grayson, by John Green, the author of the teen romance novel, Fault in Our Stars. The book debuted on The New York Times children’s best-seller list — the first LGBT-themed young adult novel to make it to the list and it remained there for three weeks.

“He returned the next day, he’s halfway done with the book, he’s not a reader but he said, ‘This book is really good,’” Crowley said.

Crowley asked him if he was cool with the gay characters. The student replied, ‘Yeah … the main character and I, we have so much in common. I see myself.’”

What’s more, Crowley said there was no push back on the pride library. Classroom libraries come within the purview of the teachers with help from the district.

“LAUSD is an LGBTQ friendly school district,” Crowley said. “They stand behind and support their LGBTQ students and teachers.”

“Nobody outside of the Pride Club expected it,” student Anthony Mandac said. “Everyone reacted positively and that really shows how our school has grown over the decades. That’s thanks to teachers like Crowley and other classmates who have helped make a change in how the LGBTQ+ community is viewed.”

“The most joy comes from when the students open the boxes [of books] and start to go through them,” Crowley said. “I had one student, Angel, who found the book, Boy Meets Boy. He walked by me and Principal [Jeanette] Stevens with the book and said, “‘I finally have a reason to read.’”

“It’s just fantastic,” Crowley said. “The straight kids are loving it and it brings up good conversations. It’s been a labor of love, we never expected it to blow up like it has. It’s surprising to discover it’s the first one in the nation.”

Tammy Centers believes the library is interesting and a good idea.

“Someone in the LGBTQ+ community who is not ready to come out can come to this library and not be so scared to come out or just to be who they are,” Centers said.