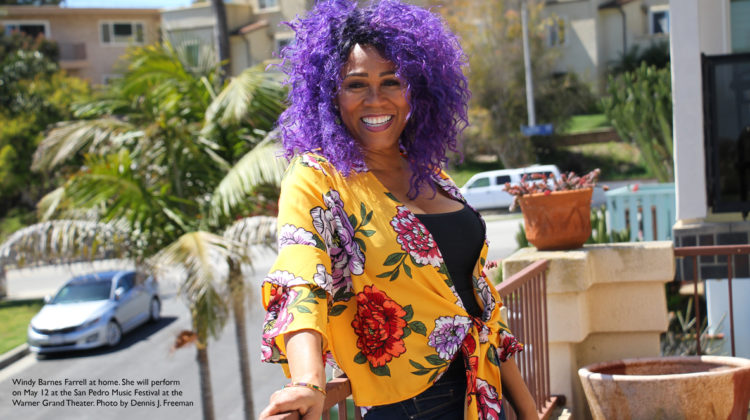 Music for life. That is songbird Windy Barnes Farrell’s story. She sings, sings and sings some more. While you’re at it, make it good to the folks listening to you, she said. Barnes Farrell has made it good enough that she has never had to do anything in the line of employment but open up her mouth.

Her vocal skills used to get her into clubs as a teenager where she would perform. Then she was onto bigger and better things. Performing at these small venues eventually fast-tracked Barnes Farrell to working with Stevie Wonder, making the international rounds with the great Julio Iglesias, and collaborating with the soulful Michael Bolton (We’re Not Making Love Anymore). 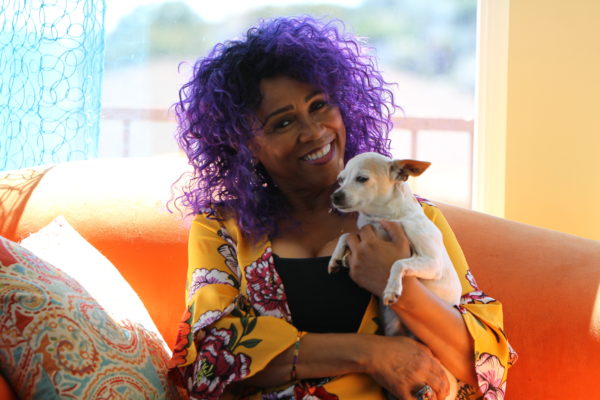 So, if there is someone who knows a thing or two about good music, Barnes Farrell, who headlines the San Pedro Musical Festival on May 12 at the Warner Grand Theatre, has already dialed that number in.

“I love all kinds of music,” Barnes Farrell said in an interview at her San Pedro home. “When people ask me what kind of music I sing? I say, ‘Good music.’ That’s how I distinguish between one or the other.”

As far as her definition of what good music is, the San Pedro songstress said it should be something that stirs the soul.

“It is music that moves you to feel a particular way, music that takes you to another space that is good, that makes you feel good on the inside,” she said. “Some music to me is not necessarily meant for that purpose. It’s meant to move you but feel good. Some music is distorted…you can’t really feel good about it, but if you’re doing drugs and they make you feel some kind of way, like in a trance or something…that’s not the kind of music I’m talking about. To me, for me, this is personal, it’s music that has miracle content, and if it’s instrumental, it has a melodic or a certain melody that is pleasing to the ear.”

Barnes Farrell has had an interesting journey getting to where she is today as an accomplished singer and coveted singing coach. None of her other eight siblings took to the singing rout that she took towards her life pathway. Her mother worked as a seamstress. 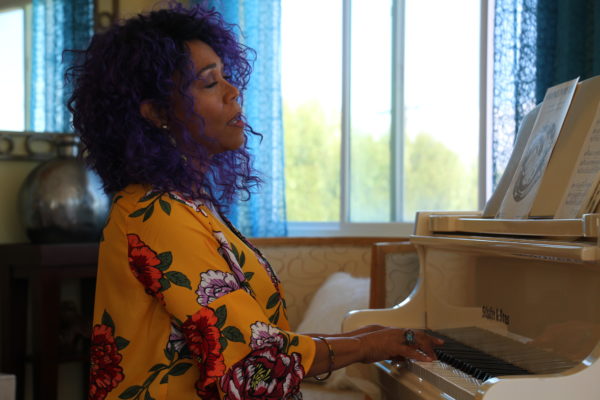 She was the only one in the family blessed with talented vocal chops. She was determined to use them, too, even though she got plenty of grief and a lot of pushback from family members.

“[It] was purely a gift from God,” she said. “Out of the nine, there nobody singing but me, nobody in music, not my parents, not even my siblings. I grew up in a world with no support. I was not encouraged to sing. I was encouraged to shut up. I could sing since I was three.”

Without the backing of her family, Barnes-Farrell, who travels and performs extensively in China and throughout Asia, said she learned a valuable life lesson growing up in such a big family.

“It was like a community,” she said. “It felt like I learned about the world from my siblings. Each one of them represented a different aspect of life that I would encounter once I left home. Somebody really loved you, somebody really adored you, somebody hated you. There were teams of people for you and against you.

Of course, since she had the gift of singing, there was some hating going on as well, Barnes Farrell said.

“It was all this manipulation from the older sisters,” she said. “[There] was jealousy. I didn’t understand what that was as a kid, but it was like I got a lot of attention as a kid because I did sing. They didn’t (get) the same type of attention. It seemed like it was resentment that was built up. I had one older sister who was the antagonist; she just had it in for me. She just didn’t care for me for whatever reason.”

Barnes-Farrell got her career props going, listening and singing along to Motown artists from the jukebox or radio. Motown’s original songstress Gladys Knight caught her attention. It was at age five that Barnes Farrell saw Knight perform on television and decided that singing was what she wanted to do.

“Watching her on television, I remember saying to myself, looking at her, ‘I can sing like that,’ and I was a kid,” Barnes Farrell said. “I was clear as a little girl that was what I wanted to do for the rest of my life. I didn’t know that I should have had support. I didn’t know this was weird. I didn’t know to compare, and then when I got older and I saw people like the Jackson 5 and the Winans, I was like, ‘I’m beautiful. We could have been harmonizing together…”

As it turns out, Barnes Farrell, because of her strong singing voice, was so good that she became a requested item for teachers who would pull her out of one class just for her to perform in another classroom. One day, a substitute teacher gave her a pathway directive that she still remembers to this day.

“He said to me, you have such a recordable voice,” she said. “I didn’t even know what that meant because I didn’t know anything about recording. I was about eleven. He said, if you don’t become a big superstar, I would really wonder why?”

Well, that teacher need not worry because Barnes Farrell took that advice baton and ran with it, going from school and church phenom to a worldwide performer.

Getting behind the microphone, though, is just one aspect of her multidimensional musical career.

When she’s not on stage belting out songs, she is a choir director. She runs and operates Windy Barnes International Voice Academy. The Mother’s Day concert that she’ll be performing in is run through her Windy City Productions. Married to former Los Angeles City Councilman Robert Farrell, Barnes Farrell has developed and prospered her business acumen as well as keeping her singing drive alive.

That attention thing? She’s gotten plenty of it throughout her career, but that is not why she chose to go into that profession.