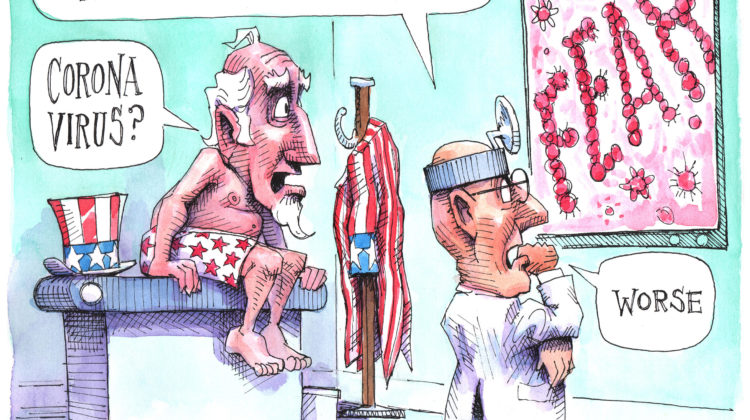 The next time someone tells you that government should be run “like a business,” place them in isolation for 14 days

With the greater part of Los Angeles County on lockdown, it wouldn’t be difficult to imagine just how much worse things could get. All nonessential public buildings closed, public gatherings cancelled and workers laid off or furloughed as restaurants and bars are ordered to close. Fortunately, it hasn’t gotten to the point of mandatory self-quarantine yet. This epidemic has become a flu affecting our very economy as well. How did this get far out of hand?

It is all too simplistic at this point to blame the president for the ineptitude of his response to the coronavirus. It’s not that he underestimated the threat or misunderstood the threat faced by our nation. He knew the predictions in December. It’s just that he and his party didn’t think they should do anything about it until the optics of their do-nothingism amidst a crashing stock market and economic failure started to look bad. Still, why would anyone believe him anyway if he did raise the alarm? He’s not known for telling the truth.

Even now, we are getting more real information from our county and state governments backed by real data than we are from his White House briefings. Nearly every time he says something, the stock market takes another turn for the worse.

I am, like most of you, very concerned about my neighbors, my community and how we as a nation survive this threat — both the virus and political ones.

I am also highly aware that this crisis is probably the best-case argument for a national health care system that covers everyone. Bernie Sanders couldn’t have a better example of how a patchwork of for-profit health corporations just isn’t adequate to deal with a pandemic. Although this pandemic probably couldn’t have been avoided, we only need to go back a few years to the Barack Obama administration’s handling of the Ebola virus outbreak for a playbook on how to keep a disease from getting out of control.

In the 2014-2015 West African outbreak, the U.S. played a leading role in mobilizing an unprecedented amount of funding and personnel to contain the virus. Only 11 people were treated for Ebola in the United States during that epidemic. On Sept. 30, 2014, the Centers for Disease Control confirmed the first travel-associated case of Ebola Virus Disease diagnosed in a man who traveled from West Africa to Dallas, Texas. The patient died later, but two healthcare workers who cared for him in Dallas tested positive for Ebola. Both recovered. The virus was contained before it had a chance of spreading. And what you don’t hear from the Oval Office is that another outbreak was declared on Aug. 1, 2018. Not to worry though, Donald Trump has that one under control, too, even though he cut funding for it.

Underlying Trump’s late response to COVID-19 is not just his incompetence or negligence, but a core philosophy that has infected our nation, not unlike the current virus.  One that believes that the government that governs least, governs best. In some sectors, that might be true, but not in health care, not in financial regulation of Wall Street and certainly not when it comes to catastrophic events like Hurricane Katrina or the AIDS virus. You just can’t run certain sectors of the government like it’s a business and yet conservatives continue to do so even as the historical evidence proves them wrong.

I have witnessed more than once in my lifetime what happens when the federal government ignores the advice of the CDC, the World Health Organization and the scientific community on issues such as global warming. People end up dying because proactive measures were not taken. Oddly enough, each of the most catastrophic calamities to hit our country have happened under Republican presidents: Ronald Reagan with AIDS, George Bush Jr. with Hurricane Katrina (don’t forget the mistake of the war in Iraq or the great Recession of 2008) and now Donald Trump and the coronavirus and accompanying stock market crash.

Each of these administrations argued for tax cuts for the wealthy and passed them, raising the national debt to a whopping $23.3 trillion all the while claiming to be fiscal conservatives.  All this president can do is ask Congress to fix the COVID-19 problem after it’s already a pandemic and he goes off to play golf. There’s something to be said about the old adage – an ounce of prevention is worth a pound of cure.

The current disaster is only complicated by the lack of test kits. A new study out of China found that 86 percent of COVID-19 infections there went undiagnosed before their government enacted a travel ban on January 23. And that people who had not been diagnosed with COVID-19 were the source of 79 percent of reported cases in China. Furthermore, if undiagnosed people hadn’t spread the virus, the number of cases in Wuhan could have been reduced by 66 percent and the rest of China by 79 percent, the study reports. Are we still Making America Great Again?

In an analysis that details the economic implications of the COVID-19  just released by the Los Angeles Economic Development Corporation, they recommend the federal and state government consider the following actions:

All of these would seem like common sense actions for a government that cared more for its people than making government operate like a business.