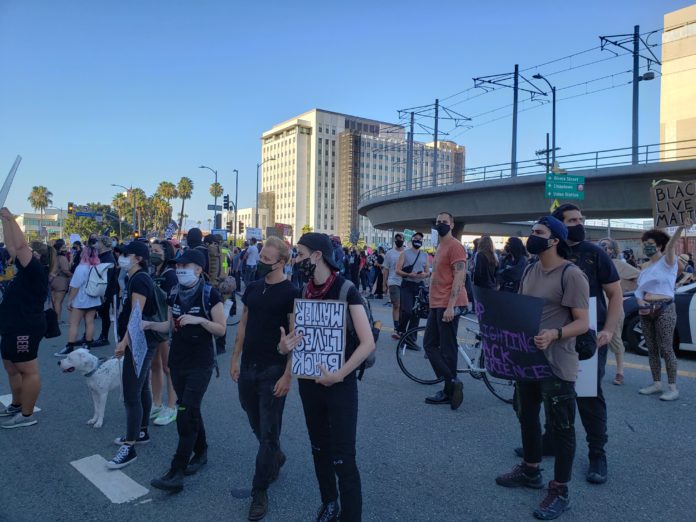 As the world watches the escalation of federal troops, harassment, arrests and beatings of Portland protesters, thousands in Portland, Los Angeles and around the country demonstrate in solidarity, demanding “US Troops out of Portland.”  More than 60 demonstrators have been arrested and 46 charged with felonies. What began as a racial justice movement is now a broader campaign to drive the federal forces from the city.

President Trump and the Department of Homeland Security have repeatedly labeled the Portland and all protesters as “violent anarchists.” In response protestors have formed groups to display solidarity. A “Wall of Moms” has grown to include hundreds of women in yellow shirts linking arms. A “Wall of Dads” in orange shirts includes many with leaf blowers to push tear gas away from the crowds. And moist recently a “Wall of Veterans.” Many nurses on July 25 showed up in blue scrubs.

Large demonstrations in Portland for two solid months have gathered, increasing local and national support.  At the same time, the US government sent federal troops to abduct, threaten and arrest targeted young people.

While the Portland police force and Mayor previously collaborated with these troops, they are now demanding their withdrawal saying that they have incited violence through their actions.  On July 25 the state lost its bid for restraining order against the four federal agencies.

On Saturday, July 25 at least 2000 demonstrators, primarily young Latinx protested at LA City Hall.  There was no police presence.  New to this demonstration were scores of signs by young Latinos and their families demanding justice for Veronica Guillen, Army Spc. member murdered April 22 by Army Spc. Aaron Robinson. Her remains were just found near the Ft. Hood base.

After some speeches deploring cop brutality, and demanding “US feds out of Portland”.  One small group led by the Maoist Revolutionary Communist Party led their own split off march.  After more speeches, another group of more than 1,500 march through downtown, rallied in front of the LA Police Department, and proceeded to the Department of Homeland Security.

At this point, a small group of anarchists, ultraleft and undercover cops spray-painted slogans on the US Courthouse building and broke windows.  The majority stayed in the streets, refusing to be suckered into this provocative action.

The march continued to the 101-freeway entrance where again the small group of self-proclaimed leaders urged marchers onto the highway ramp and be arrested.  But the overwhelming majority refused to move, especially after this reporter ran through the crowd, explaining that this provocation would create negative publicity for an otherwise peaceful march, give the cops an excuse to bust heads and make arrests, and this was not the way to continue building a mass movement.

Seeing that they failed to involve hundreds, they continued their march, while 95% of the crowd dispersed and left, realizing what was in store.  Not to be deterred from having a confrontation with the police to “Shut the Fucker down” as the leader “with the bullhorn” proclaimed, they ultimately had their confrontation and some arrested.

During the massive protests that have lasted for weeks in many cities, small groups of self-proclaimed more “militant” demonstrators never had a chance to carry out these confrontations.  But as the movement has ebbed and focused on cases of local police brutality, bringing down symbols of the Confederacy, getting police out of the schools, pushing back on all examples of racism inherent in capitalism, as Malcolm X said, whether it be against Blacks, Latinos or native peoples etc. actions like this can take place that discredit the movement that has involved tens of millions of people throughout this country.

Lessons of prior victorious social struggles like the anti-Vietnam War movement, the civil rights movement, and labor movement point to the need for continued massive peaceful legal mobilizations to push back on police brutality.  During the protests after the killings of George Floyd two labor actions, the June 16th ILWU Oakland rally and port shut downs on the West Coast and the SEIU July 20 workers strikes and walkouts around the country are the actions that we need, not small groups disrupting traffic or trashing buildings.

Let’s keep the focus on demanding indictment of killer cops, US Troops out of Portland and other proposed cities and keep the actions peaceful so that they can continue to draw millions into action.