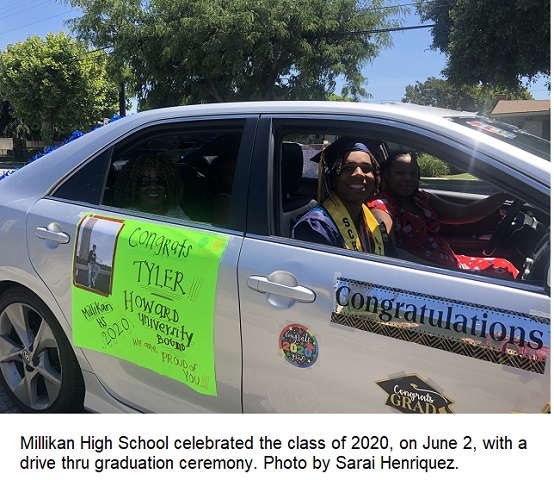 Since the coronavirus pandemic started, students have had to face many challenges. For high school, their senior year has not been the most ideal, to say the least.

“I always thought I was going to go back to school,” said James Whitney, a senior at Millikan High School in Long Beach.

He said that at first, he was excited about not going to school anymore. Little did he know how much of an impact the closing of his school would have on his life.

“They told us that we were going to come back in a month, but that never happened, which sucked because it was my senior year,” James said. “Don’t get me wrong, I feel great that I graduated. It just sucks that I couldn’t celebrate with people.”

Students and parents did not know whether or not a graduation ceremony was going to take place. Each day from June 2, parents received senior updates to inform them what was going to happen with the senior class at Millikan.

“At the beginning, we were told by Los Angeles County that we could not have any parades at all,” said Andrea Itson, the activities director at Millikan High School. “But once the county finally lifted the restrictions and gave us guidelines in late May, from there the superintendent met with the principles and activities directors and gave us the green light to plan the parade.”

It wasn’t until June 4, that the Long Beach Unified School District gave the okay for the graduation parade. Students and parents received the guidelines and rules for the parade.

“It was really frustrating to receive uncertainties every day,” said Ivette Whitney, James’ mother. “One day they send an email saying one thing, the next day they would say something completely different.”

Nevertheless, students, parents and faculty found a way to celebrate the occasion, while being careful about their health and the health of others. On June 11, Millikan High School celebrated its graduating seniors with a graduation parade.

“For Millikan, this was where the real fun began,” Itson said. “We decided to keep the music upbeat, and really throw a celebration parade. I approached teachers about a week before the parade to ask for their participation … they did not hesitate to jump on board, bringing the best energy.”

Parents or anyone who had a senior student at Millikan decorated their cars; the seniors wore their caps and gowns, and the whole Millikan staff cheered as the name of each senior was announced through the drive-thru stage.

“I loved how the Millikan staff and teachers put the ceremony together,”  said Ivette Whitney. “When we drove into the school … seeing all the teachers and the effort they put in to be there, to yell, to scream. They were there at 9 a.m. to 12:45 p.m. until the last car drove by.”

The celebration continued on that day and for the first time in history, Long Beach Unified School District had a virtual graduation ceremony for all of its high schools.

The virtual ceremony had guest speakers from the school board and the city, including Mayor Robert Garcia, who congratulated the class of 2020. Class presidents and class valedictorians made their speeches along with the principles from each high school.

“As the class of 2020, everyone will always know that you had to finish your senior year in a really challenging way and situation,” said Mayor Garcia in the virtual ceremony. “It only makes your accomplishment that much more impressive. Now, if you got through this there’s nothing you can’t do.”

He continued on saying that the class of 2020 didn’t graduate in a traditional way, but no one will ever take away their education and that they should be proud no matter what.

Now comes the time that every parent has to face and that is letting go. No matter what journey students choose, whether it is going off to college out of state or community college or not even going to college, this new chapter will be different for both students and parents.

“I have contradicting emotions,” Ivette Whitney said. “I am very proud and excited and I know that he is ready to go out there to take on the world, but sad at the same time because I do have to let go and let my son be independent.”

Once September comes around James Whitney will be on his way to boot camp where his journey as a U.S. Marine will start and he couldn’t be more thrilled.

“When you’re in elementary school you always think I’m going to be a teacher or an astronaut or a firefighter,” James said. “I was like, ‘I am going into the military.’ It was an honor thing on my part, I am going to serve my country because I can and I want to.”