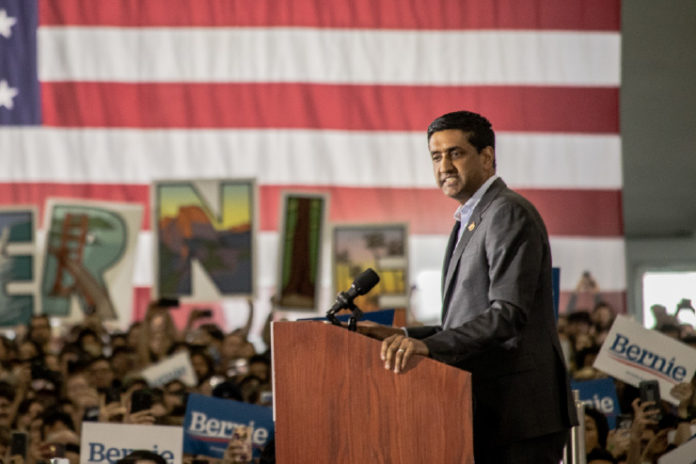 The Democratic Party is at a crossroads in California, where Bernie Sanders defeated Joe Biden in the presidential primary three months ago, winning more than half of the state’s delegates to the national convention.

In recent days, more than 110 Sanders delegates — just elected in “virtual caucuses” across the state — have signed a statement calling for Rep. Ro Khanna to be the chairman of California’s delegation to the Democratic National Convention in mid-August. Fairness, logic and even party unity all argue for Khanna to chair the delegation.

Noting that “Sanders received appreciably more votes in the California primary than any other candidate,” the statement points out that “Khanna has been a national champion on issues supported by California Democrats — health care for all, national budget priorities based on human needs and opposing [Donald] Trump on huge increases in military spending and endless wars, criminal justice reform, and a path to citizenship for immigrants.”

The statement was released by Our Revolution, Progressive Democrats of America and RootsAction.org (where I’m national director) and it has been endorsed by the California Nurses Association as well as by Amar Shergill, the chairman of the state Democratic Party’s large Progressive Caucus. Four-fifths of the state’s Bernie delegates elected in congressional districts have already signed it.

“Having our state delegation chaired by one of the Bernie 2020 campaign’s national co- chairs would send an important message of inclusion to disaffected voters across the country,” the statement read. “As state delegation chair, Congressman Khanna would be well-positioned to serve as a voice for authentic unity behind a ticket headed by Biden for the imperative of defeating Trump.”

But whether the powers that be in the Democratic Party are truly interested in such “authentic unity” will be put to a test at a June 28 statewide delegates meeting, where California’s delegation chair is scheduled to be chosen. (I’ll be part of the meeting as a Bernie delegate.) Rules for that meeting — or even information on who will run it — have not yet been disclosed.

A common steamroller technique at such meetings is for an omnibus package with myriad provisions — including decisions made in advance by those in power — to be presented for a single up-or-down vote. Instead, what’s needed is a truly democratic election, with nominations for delegation chair and a ballot enabling each delegate to cast a vote for one of the candidates. (What a concept.)

Sanders defeated Biden by a margin of 8 percent in the California primary. But hidebound tradition as well as raw political power are arrayed against the Bernie delegates pushing for Khanna to chair the delegation. Traditionally, the Democratic governor would be the chair of the state’s delegation to the national convention, as was the case four years ago with Gov. Jerry Brown. And the current Democrat in the governor’s office, Gavin Newsom, is unlikely to favor giving up this chance to enhance his national stature and aid his evident presidential ambitions.

For progressives, however, much more is at stake than political prestige.

Every indication is that only a state delegation chair will be allowed to introduce proposals or amendments to the entire convention. Simply having the option of doing so, on issues like Medicare for All and a Green New Deal, could give the state party chair leverage for programs championed by the Bernie 2020 campaign. That’s exactly the kind of leverage that party power brokers want to prevent from falling into the hands of genuine progressives.

Norman Solomon is co-founder and national director of RootsAction.org. He is a Bernie Sanders delegate from California to the 2020 Democratic National Convention. Solomon is the author of a dozen books including War Made Easy: How Presidents and Pundits Keep Spinning Us to Death.

How to Vote in the Presidential General Election