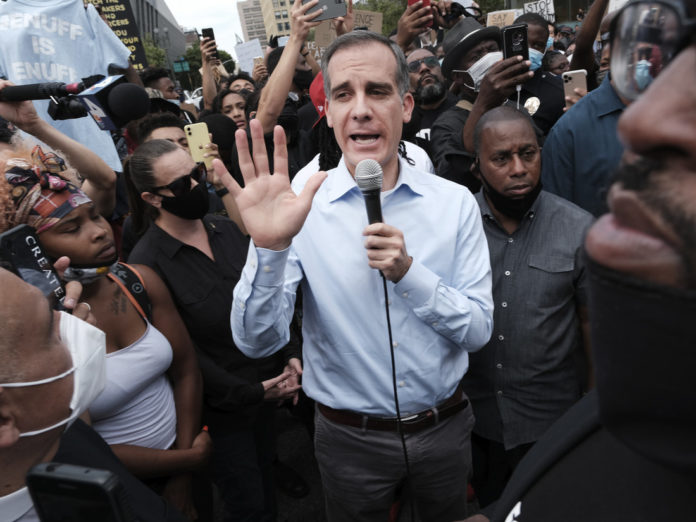 In April, Los Angeles Mayor Eric Garcetti’s proposed budget for the 2020-2021 fiscal year included $1.86 billion in discretionary funds for the Los Angeles Police Department, an increase of more than $100 million from the previous year, while most other city departments faced budget cuts.

On June 3, however, Garcetti announced alterations — further cuts to the budget of between $150 million and $250 million, including cutting any increase to LAPD’s budget.

The change in budgeting priorities happened after there were protests in all 50 states against police violence. On June 3, Los Angeles City Council President Nury Martinez formally proposed cutting $100 million to $150 million from the LAPD’s budget.

Coastal San Pedro Neighborhood Council President Doug Epperhart said the suggested reduction was not worth getting excited about. He compared it to a drop in a bucket of the LAPD’s overall funding in a normal year.

Epperhart characterized Martinez’s proposal as symbolic in light of the current protests against the police. He was not sure it was the best approach, as the LAPD has had decades of systematic racism and this is just cutting the LAPD’s budget by about 5 percent.

Recently, the LAPD put out a press release that stated that the cuts were significant — big enough that they would force the department to perform a reassessment on everything including its most basic operations. The LAPD has already begun reviewing which services can be reduced.

Because of the COVID-19 pandemic, the entire city will be in dire straits financially and Epperhart doesn’t see why the police should be any different.

“Ron Galperin, the city controller, has put forth two or three different scenarios, in terms of revenue, for instance, and how it may or may not ultimately work out,” Epperhart said.

The LAPD taking up a large portion of the city’s budget is not new.

All three San Pedro neighborhood councils recently donated $5,000 each for the purpose of purchasing all terrain vehicles to be used by the LAPD’s Harbor Division. Coastal SPNC board member Noel Gould said that this was akin to a reduction of about 15 percent of his council’s budget.

Coastal SPNC was reluctant to finance the ATV’s, and the organization that was raising the money for the ATV’s came to multiple meetings to request them.

Coastal SPNC Vice President Dean Pentcheff said that $5,000 would be a drop in the bucket compared to the LAPD’s transportation budget.

“In my experience over the last 20 years, the way it works with the City of Los Angeles and its budget, there is the police department and there is everything else,” Epperhart said.

The LAPD and the Los Angeles Fire Department combined make up about three-fourths of the city’s budget.

“The other 30 plus departments get whatever’s left,” Epperhart said. “We are running other departments on shoestrings.”

The reason for the disparity in spending is that decades ago, the city committed to having 10,000 police officers in Los Angeles and has retained that stance since.

Epperhart said the city has a strange culture that has been influenced by Hollywood’s portrayal of the LAPD, including shows like Dragnet and Bosch.

“We somehow have turned LAPD into this … legendary organization,” Epperhart said. “My personal experience is that the police in LA are kind of like the police everywhere.”

The LAPD’s prominence in the budget is helped by having the strongest city employee union in Los Angeles, Epperhart said.

When Epperhart spoke before Garcetti and Martinez proposed the cuts, Epperhart said the proposed budget was preliminary.

“At this point nobody has any clue about what’s going to happen or how things are going to pan out,” Epperhart said. “They’ll be lucky if it’s 70% correct.”

Carrie Scoville, president of the Central San Pedro Neighborhood Council, said it is too soon to comment on the budget, but that there is still time to change it.

Epperhart said he would have done a more conservative budget.

“It’s always good to be a little more drastic about these things and then be able to say, ‘Hey, it’s not as bad as we thought,’” Epperhart said. “But that’s not how the city operates, it’s always a matter of ‘Oh my god, it’s every bit as bad and worse.’”

“They want to cut neighborhood council budget[s],” said Lou Caravella, secretary of the Central San Pedro Neighborhood Council. “The thought here was that the Department of Neighborhood Empowerment budget could be cut instead of our own budget, as they have not been serving our city well lately.”

Central SPNC  board member Linda Alexander said that she was unsure the motion was necessary, as DONE’s budget is going to be cut anyway.

“This coronavirus has really caused a lot of havoc,” Alexander said. “I don’t know that we need to be real picky about hanging onto our $42,000 [neighborhood council budget]. But in the meantime, I certainly have no love for DONE, and if it were going to be cut 10%, and we can encourage it to be 20, I can support that.”

Gould said that it makes sense that his council had to do its part in regard to losing funding, but that this is money that goes directly to the community.

“It would be great if they could reduce the amount that they’re cutting the budget because we are community organizations that are here specifically to serve the needs and hear the concerns of our community,” Gould said.